Inside Mosul: Scenes of the Toll of War in Mosul

Civilians walk in Baghdad road to go back to their homes after their neighborhood has been liberated, in southwest Mosul.
Emanuele Satolli for TIME
By TIME Photo

Six months into an Iraqi-led, U.S.-backed military offensive to rout ISIS from Mosul, an endgame approaches. The militants were driven from the eastern section of the city earlier this year and are losing ground to Iraqi forces as the weeks pass. As TIME’s Jared Malsin reports in the latest TIME International cover story, ISIS is on the brink of losing the crown jewel of its lightning offensive in Iraq in 2014.

The brutal fighting has taken a massive toll on the civilian population. Islamic State fighters have taken them as hostages and human shields, and turned houses into mortar factories. As Malsin and photographer Emanuele Satolli found during a reporting trip in March and April, basic needs like running water, reliable sources of food and electricity are hard to come by in the newly liberated sections of the western side. Even at a displacement camp south of the city, police struggled to contain crowds during a distribution of aid in cardboard boxes.

After more than a week in the city, Satolli emerged with an intimate glimpse into the daily reality of those who remain in and around Mosul. See the full photo essay here. 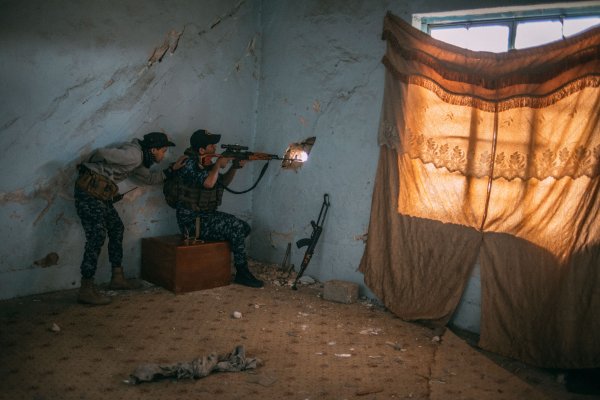