Why Parents Pick the Wrong Colleges For Their Kids

Shane Lavalette
Ideas
By John Katzman and Steve Cohen
Katzman, the CEO of Noodle companies, was founder and CEO of The Princeton Review and 2U; Cohen, an attorney, is the co-author of Getting In: College Admission in the Digital Age.

Before May 1, the deadline for college enrollment deposits, more than half of all college-bound families will screw up their choice of a school. Fully three of five students who ultimately earn a bachelor’s degree will have changed colleges. The average time for an undergraduate to earn a diploma is five and a half years, and only two out of five will achieve that goal within six years. The prospects for community college students are even worse: Only one out of five will earn an associates degree within six years.

Switching schools is costly: More than half of students who transfer will lose some or all of their credits. And for the 31 million students over the past 20 years who have started college and dropped out, the costs are even greater.

Families are flunking college selection. But the students and their parents are not generally to blame, because way too often they don’t really know what they’re signing up for. Colleges provide applicants with lots of information but little insight. They list student demographics, average test scores, majors, study-abroad opportunities — all of which are interesting inputs.

But the outcomes are perhaps what are most important: How students like this applicant fare at this school and after. And even then, the information colleges provide is not as useful as it can be. Graduation rate and starting salary are interesting, but longer-term, more elusive metrics may be even more important. For example, researchers have found that things like community and civic engagement as well as a person’s satisfaction with their work are key ingredients in overall happiness.

There are lots of reasons why students don’t graduate from the college they first choose. The most prevalent factor is money: Students most often leave school because of the stress of having to work a job at the same time. (College costs have tripled over the past 30 years, and continue to rise.) Some kids drop out because they experience a family crisis. Others simply are not ready for the independence and self-discipline that college demands. But one big reason is fit. And that is a problem that can and should be quickly fixed.

Colleges have very different personalities and some types of kids do better at one place than another. Few schools are going to market themselves as perfect places for super-competitive types or acknowledge that their campus might be inappropriate for shyer students unwilling to elbow one’s way into an internship. Colleges are far more interested in closing the sale than admitting their campus may not be perfect for everyone.

Colleges have robust information about what sorts of kids choose a particular school, why they don’t and who does well after matriculating. (One New England liberal arts college knows that if it rains on accepted students weekend, their yield will be half that realized during sunny weather.) Admission officers spend lots of time analyzing their past admits.

Yet colleges do little to help prospective students make smarter, better-fit choices. Instead, school administrators actively participate in the rankings game led by U.S. News & World Report, but perpetuated by lots of supposedly more responsible others. They provide the rankings folks with lots of data, most of it meaningless (faculty resources) and much of it misleading (subjective reputational ratings by competing admissions officers). And then they hype the rankings on the college’s website and in their marketing materials.

Some are based partly on the salaries earned by recent graduates, occasionally even sorting the numbers by academic majors. They publish starting salaries and earnings five or ten years after graduation. But these salary surveys are typically incomplete, punish schools (and students) who choose public service or lower-paying careers and ignore more — or at least equally — important criteria.

The ranking system also only serves a small percentage of the college-bound population. According to our calculations, only 542,000 of the nearly 4 million students who apply to college each year end up attending the top 350 “most competitive” colleges. The other 3.5 million — including adult learners returning to college, veterans and recent high-school grads going to less-competitive schools — are often forgotten.

Yet both stand to benefit from data on students’ happiness. The former would see institutions compete primarily for actually meaningful results. The second would realize how many good options they have, well beyond the local community college or state university, where they usually limit their focus.

The research has begun. Since 2014, the Gallup organization, working with Purdue University and the Lumina Foundation, has been surveying college graduates to better understand their success and happiness, and what factors during college affected each. The findings are insightful, and could be very useful to applicants. Unfortunately, the sample size — even at 30,000 respondents — is too small to allow applicants to compare prospective colleges.

A few universities, including Purdue and Arizona State, are extending the research to all their alumni. Unfortunately, these results are not available for public or prospective student use but are used for internal planning purposes only.

The Gallup research model could be a powerful tool to help families make better college choices. Fewer students would have to transfer if their initial choice were a better fit. But they need Gallup-like insights to help compare schools. The objective is less to compare Ivy League graduates to state-university graduates to small liberal arts college grads. Rather, it would be to help students recognize that there are differences between schools — and outcomes — for people like them.

All — or nearly all — graduates should be surveyed annually for the decade after they graduate. They should be asked how their college prepared them for the real world; about their satisfaction, their success and their engagement with work and community. These responses should be tracked (anonymously) and seek to answer the question: How do their perceptions, performance and happiness change over those 10 years?

This information would be far less difficult or costly to acquire, analyze and share than might be first imagined. The federal government is already in contact with more than 70% of four-year college graduates every month for ten years because students have to repay their college loans. Requiring graduates to complete a survey once a year — and giving people a small financial incentive to do so — is not a heavy lift.

Families need better information to help them make smarter college choices. Let’s give it to them. 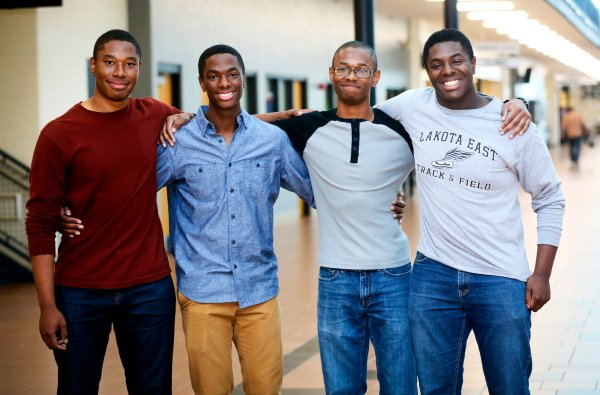 This Set of Quadruplet Brothers Were All Accepted to Ivy League Colleges
Next Up: Editor's Pick