Three platypuses in Australia were “deliberately killed” in the last few weeks, and two of the animals were found beheaded in what wildlife officials are calling a “horrific act of cruelty.”

Authorities are investigating the series of killings, which began in early March when a gardener discovered a dead platypus dumped in the Albury botanic gardens in New South Wales, The Guardian reports. Two more platypuses were found headless within the same garden last week, the Border Mail reports.

Wildlife officials believe a human is to blame because the heads were severed off with a sharp object. “We would love to be proved wrong,” Hazel Cook, a spokeswoman for the local branch of the Wildlife Information, Rescue and Education Service (WIRES), told The Guardian. “We would love to think that a human would not do this sort of thing. But I don’t think we will be.”

Cook also said the animals’ bodies were dumped in the garden since the area is hard to get to from their nearest habitat, which is more than 1,000 feet away from the garden. Their heads are still missing. The solitary creatures also likely wouldn’t have wandered into a very public area.

“Why take the heads? We still don’t know what they’ve done with the heads,” Cook said.

“We have no idea why anyone would do that, especially to something as gentle as a platypus,” she told the Border Mail.

WIRES said in a statement that is it illegal to harm native animals. Punishment for the crime includes a maximum $11,000 fine or six months imprisonment. 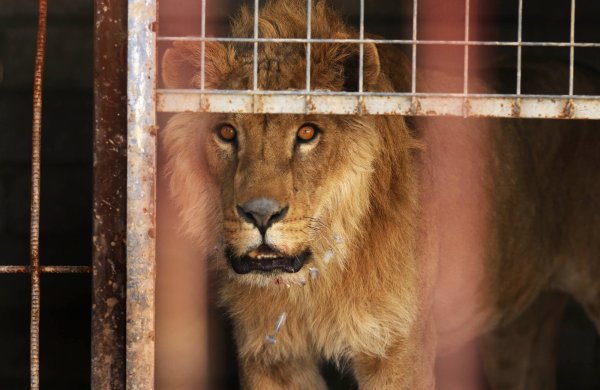 The Sole-Surviving Animals at Mosul Zoo Were Rescued: 'We Came to Iraq to Save a Bear and a Lion'
Next Up: Editor's Pick