Before Sean Spicer was Press Secretary, he played a different role at the White House: the Easter bunny.

In an edited clip, Jimmy Kimmel Live! showed Spicer apologizing for his controversial comments about Adolf Hitler and the Holocaust — but dressed as the Easter bunny.

“This week, for the first time in maybe history, we got to see the Easter bunny apologize for comments about the Holocaust,” Kimmel said before he aired the clip.

“How can you be mad at somebody so cute? It’s impossible,” Kimmel said of Spicer. “He would kill to have that job back right now.”

Earlier this week, Spicer falsely claimed Hitler did not use chemical weapons on his people during World War II. Spicer has since apologized for his comments, which set off widespread backlash.

Kimmel blasted Spicer earlier this week with a clip imagining what went through his head as he made the controversial comments.

In the clip, Spicer told himself, “At press secretary school, the one rule was ‘never defend Hitler.'” 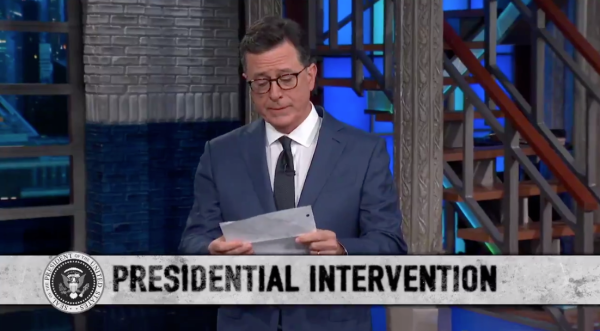 Stephen Colbert Tried an Intervention to Get Trump to Resign
Next Up: Editor's Pick