In the end, Vladimir Putin agreed to see the envoy from the Trump Administration. After a week of mutual recriminations over the war in Syria, the Russian President did not snub Rex Tillerson during the U.S. Secretary of State’s first official visit to Moscow. Instead, Putin showed a willingness to grit his teeth and accept the U.S. attack against his ally in Syria–as long as Trump offered him a way to save face in the process.

It was demeaning enough for Putin to welcome Tillerson on April 12 after the accusations the visitor’s country had leveled at his hosts. Poison gas had been used to kill up to 100 people on April 4, including children, in a rebel-held town in western Syria. In an intelligence report declassified a week later, the White House blamed Syrian President Bashar Assad for committing that atrocity and flatly accused Russia of covering it up.

The punitive missile strike ordered by President Trump against a Syrian air force base heralded a sharp tack in the White House’s approach to the Kremlin. Both Tillerson and his boss insisted that Russia must revoke its support for Assad. “Putin must see what a barbarian this guy is, and it’s a very bad symbol for Russia with this guy gassing children,” Trump told the New York Post.

The Kremlin showed no sign of backing down. In an interview aired on Russian television at the start of Tillerson’s visit to Moscow, Putin said the U.S. had violated international law by attacking Assad’s forces without first proving his use of chemical weapons. The U.S. had acted in Syria much as it did in Iraq in 2003, he said, by attacking a sovereign country “under a completely trumped-up pretext.”

The thunderous backbiting seemed to blow apart Trump’s pledge to “get along” with Russia after a presidential race overshadowed by claims that Moscow had covertly helped Trump get elected. Yet behind the escalating rhetoric, the two sides were both careful to leave room to smooth things over. The Kremlin stopped well short of countering the attack by military means. It did not use Russia’s air defense systems in Syria to attempt to shoot down the U.S. cruise missiles, as it could have. Nor did Putin revoke his invitation to form a coalition with the U.S. against ISIS. For its part, the Trump Administration offered no clarity on how exactly it would seek to remove Assad; Trump himself insisted in the New York Post interview that “our big mission is getting rid of ISIS … that’s where it’s always been.” For the sake of that objective, they may still be willing to set aside their dispute over Assad.

That has been Putin’s hope ever since he intervened Syria in 2015. The ideal outcome for him would be an anti-terrorism coalition with the U.S. and its allies in Syria–one that would keep Assad in power, eliminate ISIS and erode the West’s resolve in isolating Russia over its 2014 annexation of Crimea from Ukraine. This latest twist in the conflict leaves the Kremlin with a worsening dilemma, however. Russia’s isolation from the West is deeper than ever, and Trump has embraced the sort of interventionism that Putin has long sought to counter in the Middle East. Russia is also now bonded with Iran–an alliance that the U.S. would not allow into its own coalition in Syria.

To underscore that dilemma, Tillerson arrived in Moscow with an ultimatum: abandon Assad or share responsibility for his crimes. Neither option would seem palatable to Putin, who is intent on projecting strength, especially in his frequent confrontations with the West. “The idea of retreat is not part of our President’s constitution,” says Alexander Konovalov, a foreign policy expert in Moscow. “So he will have to demonstrate toughness.”

That need to act tough did not stop Putin from showing an openness–even an eagerness–to work with the U.S. during Tillerson’s visit. While avoiding the media right after their talk, the Russian President left it to his Foreign Minister Sergei Lavrov to announce that U.S.-Russia cooperation would “benefit not only our peoples but the entire world.”

What remained unclear after the meeting is whether the two sides can find any common ground on the future of Assad, who appears intent on imposing further horrors on his own people. 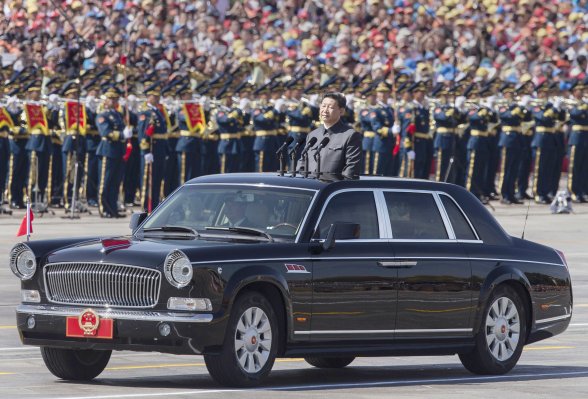 Can Trump and Xi Avoid War and Strike a North Korea Deal?
Next Up: Editor's Pick