The Golden Gate Bridge Is a 'Suicide Magnet.' So Officials Are Adding a Net

The Golden Gate Bridge has long had a reputation as one of America’s most beautiful landmarks, and also one of its deadliest. For decades it has been the “number one location” for suicide attempts, with nearly 40 known people jumping to their deaths in 2016 and about 200 more being talked away from its ledges. Now officials are taking a $200 million step to change that.

On Thursday, after years of debate and development, California officials commemorated the beginning of construction on a “suicide deterrent” net that will span both sides of the Golden Gate Bridge. California Sen. Dianne Feinstein and House Democratic Leader Nancy Pelosi planned to attend, along with families who have lost loved ones to fatal jumps, marking the launch of a first-of-its-kind project by giving remarks and planting flowers.

“The Golden Gate Bridge is a source of immense pride to San Francisco. But for too many families in our community, it has also been a place of pain,” Pelosi, who represents the San Francisco area in Congress, told TIME in a statement on Wednesday. She describes the barrier as “a suicide deterrent system that will save countless lives” and “an achievement years in the making.”

Expected to be finished by 2021, the project initially estimated to cost $76 million now has a price tag of over $200 million. Priya Clemens, spokesperson for the Golden Gate Bridge, Highway and Transportation District, says that increase is partly due to the “experimental” nature of the project, which led designers to underestimate how much it would actually cost to attach a net of this size across more than a mile and a half of open water and windy air. While locals have floated the idea of adding some kind of barrier since the 1940s, just years after the bridge opened, discussions about the current project got started about a decade ago. Suicide prevention advocates have propelled it.

When the project is completed, the stainless steel mesh net will be located about 20 feet below the bridge and stretch 20 feet out from its edges, running the length of seven football fields. If a person jumped onto the net, it would be unforgiving, Clemens says, perhaps leading to broken bones. And a person could still find their way to a drop off its upturned edge. But it is the net’s existence, more than its ability to catch, that officials hope will deter people from trying to jump in the first place. The number of people attempting jumps has been increasing in recent years, Clemens says, though it is unclear why.

Researchers have tried to analyze the Golden Gate Bridge’s tendency to draw people who want to end their lives, sometimes after they’ve taken flights from other parts of the country to do so. A 1970s study noted that from the bridge’s opening in 1937 up until that point, more than 500 known people had leapt off its ledges. Trying to understand the landmark’s “fatal attraction,” the researchers sought out interviews with the roughly 1% of people who had survived.

Of the six survivors the researchers interviewed, every one said their plans involved only that spot and four of the six said they would not have attempted suicide if they had been unable to jump from the bridge – if, for example, there were a “suicide barrier” that prevented it. One survivor said the beauty of the “readily available” bridge attracted them. Another associated the jump with entering “golden doors” to a new spiritual realm. The promise that the method would be effective brought them, too. Because the site situated roughly 220 feet above the water was already so famous for suicides, that reputation apparently became self-perpetuating.

Similar reasons for the Golden Gate’s unfortunate appeal were suggested in studies conducted during ensuing decades. “The Golden Gate Bridge is an iconic suicide magnet. For some, the bridge is an easily accessible site — pedestrian access, a 4-foot railing, a bus stop, and a parking lot,” write the researchers in a 2009 study published by The American Journal of Psychiatry. “For others, the bridge is a romantic final exit. Some believe bridge suicide is a painless death. One jumper reportedly left a note on the bridge reading, ‘Why do you make it so easy?’”

Other studies showed that structures such as the nearby Bay Bridge, which spans from San Francisco to Oakland, do not have the same draw. Natural landmarks, such as Niagara Falls and Mount Fuji’s “Suicide Forest” in Japan, have also developed notoriety as places people go to end their life, but studies have shown fewer numbers of successful attempts.

One study noted that the total number of known suicides at the Golden Gate Bridge was more than 1,300 by the late 2000s but estimated that with some bodies washed out to sea and mysterious cars left unclaimed in nearby parking lots, the actual number might be closer to 2,000.

Clemens says that discussions in previous eras about adding a barrier were stalled in part because officials insisted that any added structure would have to stop suicides completely. Though they still hope that will be the case, the “100%” criteria has gone by the wayside, as attitudes toward suicide have shifted, she says: “People see it now as a public health issue.” Over the years, the bridge authority has increased the number of trained officers patrolling the bridge, where signs already encourage people to phone or text for help if they feel they’re in a crisis.

The Golden Gate Bridge remains one of the country’s most popular landmarks. The span has been crossed by more than 2 billion vehicles since the opening 80 years ago. More than 10 million people visit the bridge each year, about double the number that visit the Grand Canyon. Some local tourism sites brag that it is the most photographed man-made structure in the world.

The fact that its looks will be changed – though with an eye to “minimal visual impact” – has been a top design consideration as authorities spent years working on the project. Previous suggestions that a fence be built along its edges were scrapped as people complained that it would mar the site and ruin the view. Though the steel was originally planned to be painted the same rusty orange as the bridge, designers discovered that leaving the stainless steel untouched actually did more to minimize distraction, helping the net blend in with the water below.

“It’s hard to say why people have chosen this place,” says Clemens, suggesting that the “mystical” nature of the bridge on the edge of Pacific Ocean may be part of the draw. But, she says, “that’s something we’re working to stop.” 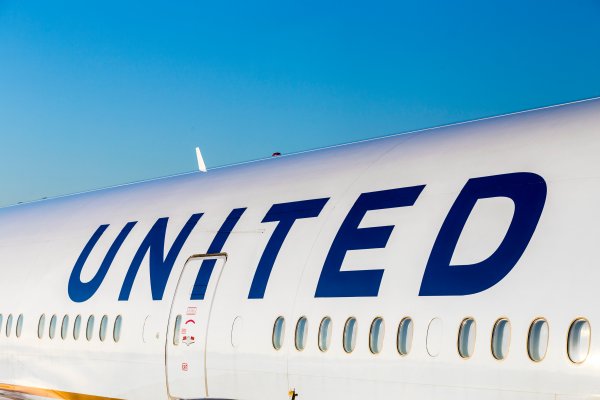 2 More Officers on Leave After United Incident
Next Up: Editor's Pick