(DORTMUND, GERMANY) — A note left at the scene suggests a possible Islamic extremist motive for the attack on Borussia Dortmund’s team bus, and one suspect has been detained, German prosecutors said Wednesday.

Frauke Koehler, a spokeswoman for federal prosecutors, said investigators are focusing on two suspected Islamic extremists and have searched their homes — but authorities said a range of other motives are possible for the Tuesday evening attack before a Champions League match. One of the Islamic suspects, a man, was arrested.

Investigators found three copies of the note at the scene, including demands for the withdrawal of German Tornado reconnaissance jets that are assisting the fight against the Islamic State group and for the closure of the U.S. Ramstein Air Base in Germany, Koehler.

Federal prosecutors took over the case on the basis that a “terrorist background” is likely, but “the exact motive for the attack is still unclear,” Koehler said. Because of the notes, “an Islamic extremist background to the attack appears possible.”

Three explosions went off near Dortmund’s bus as the team set off Tuesday evening from its hotel on the city’s outskirts for its Champions League quarterfinal match against Monaco.

They shattered a window of the bus — injuring Borussia Dortmund defender Marc Bartra, who underwent surgery for injuries to his wrist and arm. Police said an officer accompanying the bus on a motorbike was suffering from blast trauma and shock.

The devices used in the attack contained metal pins, one of which buried its way into a headrest on the bus, Koehler said. Investigators are still working to determine how the devices were detonated and what substance was used.

The match was called off shortly before kickoff and rescheduled for Wednesday evening. It was being held under increased security, and the club said fans wouldn’t be allowed into the stadium with backpacks.

Koehler said investigators are evaluating the credibility of the claim of responsibility. Tobias Plate, a spokesman for Germany’s interior ministry, noted that notes claiming responsibility at the scene haven’t been a feature of past Islamic extremist attacks.

There are “significant doubts” about a second claim of responsibility found online about a left-wing extremist motive for the bus attack, Koehler said.

Speaking shortly before Koehler, the region’s top security official raised the possibility that the note found at the scene could be “an attempt to lay a false trail.”

“We are investigating in every direction, and it’s really meant that way,” said Ralf Jaeger, the interior minister of North Rhine-Westphalia state. “It could be left-wing extremism or right-wing extremism. It could be the violent fan scene, it could be Islamic extremism.”

Borussia Dortmund president Reinhard Rauball said Wednesday’s rescheduled match would be a challenge for the team.

“However, we expect and I am confident that the team will do its best and deliver a spectacle in the Champions League this evening,” he said.

About 40 fans gathered outside Dortmund’s training ground on Wednesday, many in the club’s distinctive yellow and black shirts. As police waited in vans in front of the screened-off training pitch, four young women drew “You’ll Never Walk Alone” in black markers on yellow cards.

Annika Lentwojt, a 21-year-old engineering student, said she was in the stadium Tuesday when the match was called off but “always felt safe.”

Lentwojt said she is confident that Dortmund’s players will be able to perform in the rescheduled match.

“I think the game or the score in the end is not that important,” she said. “They will concentrate, they are professional players. It’s not the main topic of the game today.”

Peter Sobeck, a 55-year-old city planner who described himself as a lifelong Dortmund fan, said he was shocked that players were targeted in a relatively small city like Dortmund. The western city, located in Germany’s densely populated Ruhr industrial region, has just under 600,000 residents.

“I thought (in) these great cities, Paris or Munich or London, something like that, but in Dortmund, I never thought that,” he said.

Dortmund is one of Germany’s most popular soccer teams and a regular contender for the Bundesliga title, which it last won in 2011 and 2012. It is in fourth place with six games left to play this season, 18 points behind leader Bayern Munich — Germany’s dominant club of recent years. 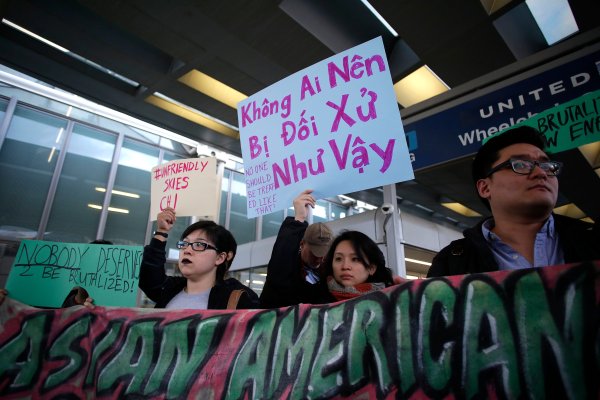 Vietnam Fuming Over Treatment of United Airlines Passenger
Next Up: Editor's Pick