White House Press Secretary Sean Spicer was reportedly contacted by the office of Republican mega-donor Sheldon Adelson for remarks he made Tuesday downplaying atrocities committed by Adolf Hitler during the Holocaust.

CNN reports that Adelson’s office reached out to Spicer after the gaffe. Spicer confirmed to the network that a talk took place, but would not elaborate on his “private conversation” with Adelson advisor Andy Abboud.

Adelson, a billionaire and a major backer of Republican causes, is also one of America’s biggest donors to pro-Israel initiatives. The founder and CEO of the Las Vegas Sands Casino is a major funder of the Republican Jewish Coalition, the founder of the pro-Israel charity Adelson Family Foundation, and the owner of an Israeli daily newspaper.

The conversation between Spicer and a representative of Adelson was first flagged by Politico reporter Alex Isenstadt on Twitter, prompting a whirlwind of speculation on social media.

Spicer is battling a barrage of criticism for the comments he made during a White House press briefing, during which he attempted to make a comparison between Syrian President Bashar Assad and Hitler.

In a condemnation of Assad’s recent chemical attack that killed upwards of 80 civilians, Spicer falsely claimed that the German dictator “didn’t even sink to using chemical weapons.”

“I was obviously trying to make a point about the heinous acts that Assad had made against his own people,” Spicer said later in a televised apology. “For that I apologize, it was a mistake to do that.”

The mistake, however, was only the most recent in a string of public comments from the White House that have been viewed as anti-Semitic or insensitive; on Holocaust Remembrance Day in January, the administration neglected to mention Jewish people in a statement marking the liberation of the Auschwitz concentration camp, where more than a million Jews were killed.

Tuesday’s gaffe was particularly poorly timed as the comments were made during Passover, one of the most important Jewish holidays. 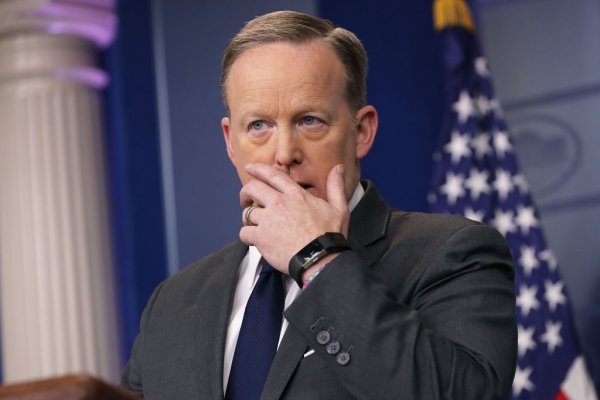 Spicer Apologizes for Hitler-Chemical Weapons Comment
Next Up: Editor's Pick