The True Story Behind The Lost City of Z

Warning: spoilers for The Lost City of Z follow.

Since he disappeared in the Brazilian jungle in 1925, the British explorer Percy Fawcett has inspired plays, comic books, Hollywood movies and even an Indiana Jones novel. Eighty years later, Fawcett’s search for a lost ancient city which he dubbed “Z” inspired the journalist David Grann to follow in his footsteps. Grann recounted the story of Fawcett’s life, in parallel with his own journey to learn about it, first in the New Yorker and then in a book, The Lost City of Z, which is now the basis of a movie of the same name, hitting theaters April 14.

The film, which stars Charlie Hunnam as Fawcett, Sienna Miller as his wife Nina, Tom Holland (a.k.a. Spider-Man) as their eldest son Jack and Robert Pattinson as fellow explorer Henry Costin, hews close to Grann’s book. While it consolidates many of his experiences, it paints a portrait of a man teetering on the brink of obsession, with director James Gray offering his own interpretation of the explorer’s ambiguous fate.

Here’s how the movie’s version compares to the way Fawcett’s life and fateful journey really unfolded.

Fact: Fawcett was at a social disadvantage because his father had damaged the family name.

The movie Fawcett’s preoccupation with social advancement draws from the real Fawcett’s impaired standing. His father, Captain Edward Boyd Fawcett, began his life a Victorian aristocrat but squandered away the family’s wealth as he struggled with alcoholism. The family scrounged up enough to send the younger Fawcett to elite schools and the Royal Military Academy. But later in his life, any desire for status would be eclipsed by Fawcett’s fixation on finding Z, which would leave his own family destitute.

MORE Review: James Gray’s Resplendent Lost City of Z Speaks to the Explorer in All of Us

Mostly fact: The Royal Geographical Society summoned Fawcett out of the blue for a mission to Bolivia in 1906.

Though the RGS did tap Fawcett for a South American voyage, it didn’t happen as unexpectedly as the film suggests. Fawcett first visited the institution in 1900 and spent a year training there before his first mission. Whereas the movie presents Fawcett as somewhat reluctant to become an explorer — he says he hoped to rectify his undecorated uniform with some military action — the real Fawcett had been eager to work as an explorer since he was stationed in the British colony of Ceylon, now known as Sri Lanka. In pursuit of rumored treasure there, he had found the ruins of an ancient temple and knew then that he wanted to forge a path like those of Richard Francis Burton and David Livingstone.

Fact: Fawcett returned to the Amazon many times between his first and last expedition.

As the movie depicts, Fawcett’s first expedition to the Amazon was a mapmaking mission. With the auto industry gaining steam, demand for rubber boomed, and border disputes between Bolivia, Brazil and Peru threatened to erupt in a violent conflagration. The countries summoned England as an independent arbiter. During this and future trips, rumors of a lost civilization, which Fawcett heard first from Indians and later read about in conquistadors’ accounts, struck him as increasingly possible.

Much like in the movie, during one trip in 1910, Fawcett’s group was traveling by boat when they were suddenly inundated with a barrage of poisonous spears. After taking cover, they began to sing “Soldiers of the Queen” as Fawcett waved a handkerchief and walked toward the shore to indicate friendship. The tribe, the Guarayos, invited the men to stay as guests. While there, Fawcett witnessed their advanced fishing methods. Later, when he met the Echoja tribe, he was impressed by their herbal medicines and their cultivation of floodplains to grow crops in the middle of the jungle. These observations felt like mounting proof that a remarkable ancient city might once have flourished.

Fact: Nina Fawcett was an independent woman who always hoped her husband would allow her to join him on his expeditions.

Well-educated, insatiably curious and a speaker of multiple languages, Nina supported her husband’s missions from afar not only by raising their three children but by defending his reputation from his many detractors. But she also longed to join him. An advocate for gender equality, she argued that she was in good health and knew how to navigate by the stars. Although she did visit her husband in South America once, he always refused her requests to join in his dangerous expeditions.

The movie’s Fawcett rails against his colleagues’ attitudes toward Indians, which he perceived as alternately paternalistic and racist. He even does so to a jeering crowd of RGS members, in a scene that appears to be fabricated. In reality, Fawcett’s views were more complicated. He did advocate nonviolence toward Indians and disapproved of intervention with their way of life. He learned their languages and argued that the inhabitants of his “lost city” would have been capable of scientific feats on par with those of Europeans at the time. But he also referred to them as “ape-like,” “jolly children,” and he believed any advanced civilization in the Amazon must have had origins in European society.

Fact: Fawcett was consumed by the fear that a rival might beat him to Z.

In the movie, Fawcett tells his son Jack that he fears Americans will get to Z first, killing Indians along the way. In fact, this fear originated long before that conversation and stemmed from a combination of his concern for the Indians’ safety and his own mighty ego. His main rival was the American doctor and explorer Alexander Hamilton Rice, who had something Fawcett lacked: money. When Rice mounted an expedition in 1924, as Fawcett struggled to fund what would be his last, it was with the latest gadgets, equipment and aircraft. Fawcett’s expedition, once he finally funded it, would cost less than the price of a single one of his rival’s radios. Rice had also, to Fawcett’s anger, once killed a group of Yanomami Indians who were threatening his men, and had reportedly brought bombs on his present expedition to scare away cannibal tribes.

Fact: Fawcett often turned to psychics, mediums and the occult for guidance.

In the movie, Fawcett consults a psychic while on the battlefield in France during World War I. While Grann doesn’t write of this specific instance, he does detail the explorer’s prolonged interest in the occult. When he was stationed in Ceylon, Fawcett became acquainted with a Russian psychic named Madame Blavatsky, who would eventually amass followers around the globe. He was rumored to have used a ouija board to help him make strategic decisions during the war and to communicate with his mother during a seance. He especially turned to the spiritual world during the early 1920s, when he felt abandoned by the scientific establishment. Where they doubted his claims, spiritualists confirmed them.

Fawcett kept an inhuman pace as he trekked through treacherous terrain and had little patience for those who couldn’t keep up. One companion on his 1911 expedition to explore the Heath River, the scientist James Murray (played in the movie by Agnus Macfayden), was out of shape and contemptuous of taking orders of Fawcett. As the movie depicts, his failure to keep pace in conjunction with his many ailments posed a threat to the entire group, so Fawcett arranged to have him carried out of the jungle. Back in England after the expedition, Murray accused the explorer of leaving him for dead. While the RGS didn’t believe Fawcett was guilty, neither did they want a scandal, so they asked Fawcett to apologize. It’s unclear whether he did, but he did reconcile with the Society. Murray, meanwhile, disappeared on an Arctic expedition in 1913.

Mostly fact: Percy Fawcett and his son Jack set out on their expedition in 1925 and disappeared five months later.

In the movie, Fawcett and his 21-year-old son set out together for Z. In reality, they had a third British companion, Jack’s best friend Raleigh Rimmell. Whereas the film’s Jack has to persuade his father to return to the jungle, Fawcett was the one who enlisted his eager son for a journey. Because they had sold the rights to the journey to a consortium of North American newspapers, the trio had 40 million readers following along. The three men set out from Cuiabá, Brazil, on April 20, 1925 and sent dispatches for five months before going dark. The last letter Fawcett wrote to his wife read, “You need have no fear of any failure.”

While the film is ambiguous about their fate, it suggests that the men were captured by Indians, leaving the audience to imagine the rest. Grann posits a theory based on his own meeting with the Kalapalo Indians, who were at one time accused of killing the explorers. In 1951, the Kalapalos had offered up a skeleton which they said belonged to Fawcett — but which actually belonged to the grandfather of the chief who hosted Grann — in order to prevent more white people from coming into their territory to search for the men. LIFE magazine declared the bones the “final chapter in 25-year-old search.” But what actually happened, according to their oral history, was that the Kalapalos gave the men food and warned them not to venture further, because hostile tribes would surely kill them. The men continued on, ignoring their warnings. “People always say the Kalapalos killed the Englishmen,” the Kalapalo chief told Grann.” But we did not. We tried to save them.”

Fact: Nina never gave up on finding her husband and son, and many rescue missions were mounted to find them.

Nina spent the rest of her life believing that her husband and son were still alive. Thousands volunteered for recovery missions, and upwards of 100 people died during attempts to rescue them, or at least discover their fate. Rumors flew freely — they had “gone native,” they had been killed by Indians, that Jack had a son with an Indian woman. A 17-year-old boy named Dulipé, suspected to be Fawcett’s grandson, was pulled from the jungle and photographed for LIFE, before it was determined that he was an Indian with albinism. In 1996, an expedition of Brazilian scientists searching for clues was captured by Indians before negotiating its way out of the jungle.

Bonus: Was there a lost city, after all?

In attempting to retrace Fawcett’s steps, Grann ended up in a Kuikuro Village where University of Florida archaeologist Michael Heckenberger was living. Heckenberger showed Grann a dip in the earth that had once been part of a large concentric circle of moats. The moats had surrounded one of 20 pre-Columbian settlements that thrived between the ninth and seventeenth centuries. Connected by roads and causeways which were planned at right angles, according to the four cardinal directions, the settlements had mostly decomposed because they had been constructed with organic materials. But the cities were built, Heckenberger told Grann, with “a sense of engineering and mathematics that rivaled anything that was happening in much of Europe at the time.” 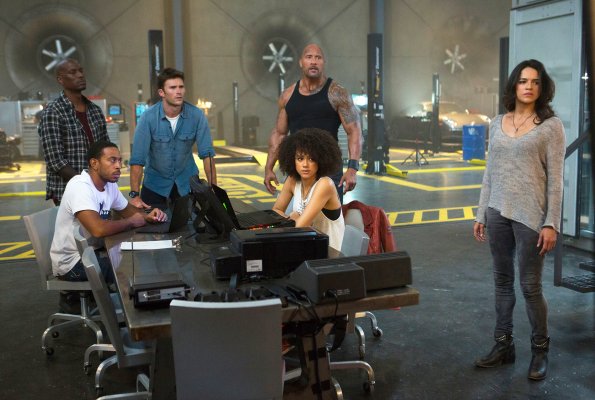 10 Fate of the Furious Plot Holes That Only Make the Movie Better
Next Up: Editor's Pick