President Trump Is Meeting With a NATO Leader. Here's Why the Organization Was First Created

On Wednesday, President Donald Trump will hold a joint press conference NATO Secretary-General Jens Stoltenberg at the White House. The meeting between the North Atlantic Treaty Organization leader and the U.S. President may be an unusually tense one, as Trump has repeatedly described the group as “obsolete” over the least year.

Numerous pundits have been analyzing what that comment mean for the future of what’s known as the world’s largest peacetime military alliance. But here’s a quick refresher on why the partnership formed in the first place.

Before NATO, the U.S. had never entered a peacetime military alliance outside of the Western Hemisphere. But in the wake of World War II, as the Cold War was heating up, a series of events in the late 1940s created an understanding in the Truman administration that the security of Western Europe was tied to the security of the United States. According to the Department of State’s Office of the Historian, those events included a civil war in Greece, tensions in Turkey, a Soviet-sponsored coup that catapulted the Communist party to power in Czechoslovakia, the Communist Party’s rise in Italy, and Soviet premier Joseph Stalin’s blockade against the Allied-occupied West Berlin.

The treaty nations agreed to the doctrine of collective security, that “an armed attack against one or more of them in Europe or North America shall be considered an attack against them all” and that each of them would provide assistance in such a situation.

But, as TIME magazine’s “NATO at 50” cover argued, Trump is certainly not the first politician to question its purpose in the 21st century:

The White House has said that Stoltenberg and Trump will discuss “how to strengthen the alliance to cope with challenges to national and international security.” 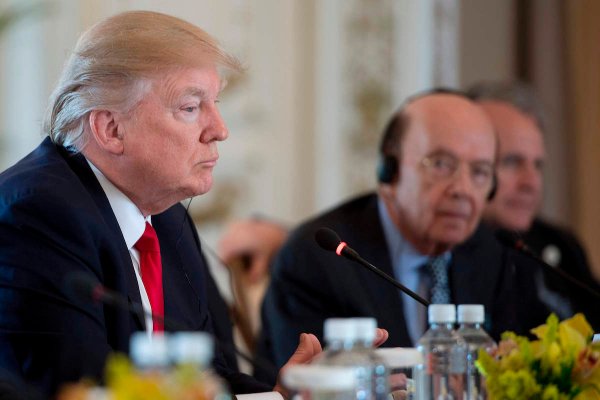 The Evolving Constitutional Power Behind President Trump's Syria Airstrikes
Next Up: Editor's Pick