Jimmy Kimmel jumped right into addressing the United Airlines passenger who was forcibly removed and dragged from an overbooked flight during his show on Monday.

United sparked outrage and a wave of backlash on Monday after videos emerged showing officers dragging the passenger off flight 3411 because it was overbooked. Blood can be seen on the man’s head as he was being carried off the plane. The airline has faulted the passenger for the incident, saying he was “disruptive and belligerent.”

Kimmel explained that United had offered vouchers to volunteers willing to give up their seats on the plane so that four airline employees could fly from Chicago to Louisville, Ky. When no one volunteered, United randomly selected four people to exit the plane, but the man refused and was dragged away by officers.

“That’s how my mother used to get me out of bed to go to school every morning,” Kimmel joked after showing a video of the incident. “This poor guy, they roughed him up.”

The “worst part of all of it,” Kimmel said, was the response from United CEO Oscar Munoz, who apologized for “having to re-accommodate these customers.”

“Just like we re-accommodated El Chapo out of Mexico,” Kimmel said. “That is such sanitized, say nothing, take no responsibility, corporate BS speak.”

Kimmel noted that it shouldn’t fall on the passengers if airlines overbook flights, adding that United could have gotten volunteers if it had offered more money. He ended the monologue with a parody commercial for United, giving the airline a new slogan: “United Airlines, f–k you.” 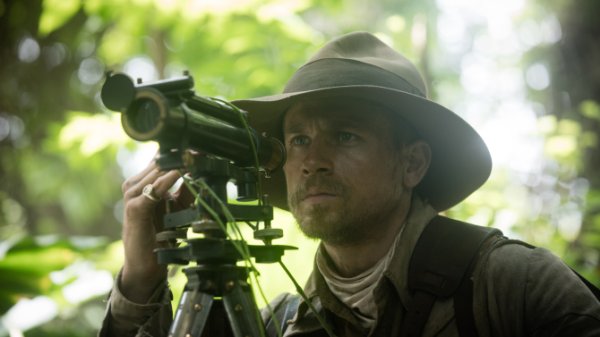 Review: James Gray's Resplendent Lost City of Z Speaks to the Explorer in All of Us
Next Up: Editor's Pick