Ahead of French Elections, a Photographer Shows a Country in Transition

Children play in a fountain at Place du Trocadero in Paris on June 1, 2009.
Pierre Terdjman for Paris Match
By Olivier Laurent

“French society is depressed,” says Pierre Terdjman, a freelance photographer who’s spent the last ten years crisscrossing his country on assignments for the New York Times and Paris Match, among other outlets. “People are tired of the political scandals. They don’t understand how they are being governed. I feel that people are shutting themselves off and growing suspicious of each other.”

This feeling is the result of a few tumultuous years for Europe’s second largest country. As the site of three major terrorist attacks in just two years — the Charlie Hebdo shooting in January 2015, the Paris terror attacks of November 2015 and Nice’s truck carnage in July 2016 — the French are living on the edge and Terdjman’s photographs show that. He photographed moments of tension (in one, for example, a victim of the attack on the Bataclan is evacuated as bystanders look in shock) but also moments of communion: one photograph shows people united against terror while another celebrates France’s joie de vivre as kids play in the shadow of the Eiffel Tower.

See his photographs: What Makes the French French, Even in Times of Tumult 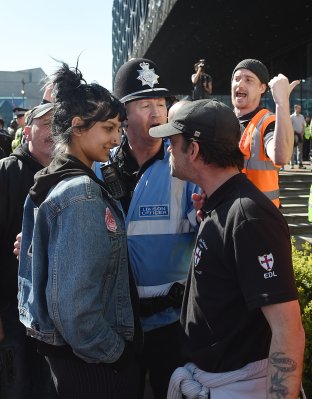 The Story Behind the Viral Photo of a British Woman Smiling at a Far-Right Protester
Next Up: Editor's Pick