Why Republicans Are Nervous About This Kansas Election

President Trump became the latest addition Monday to a lineup of high-profile Republican leaders who have waded into a special congressional election taking place in right-leaning Kansas on Tuesday.

“This is an important election,” Trump said on a robocall to tens of thousands of voters in the state. “There’s really few very much more important. And I need your vote for Ron Estes on Tuesday.”

The race to fill the House seat left vacant by Mike Pompeo, who left to become Trump’s CIA director, has drawn an unusual amount of attention from national party leaders for a race in a traditionally red state. That’s because it’s seen as the first indicator of how Republicans might fare in future elections.

If Democratic candidate Jim Thompson manages to upset Republican Ron Estes — or even narrow his margin of victory in this typically red district — some political strategists say it could spell trouble for the GOP.

Republican House Speaker Paul Ryan recently sent out a fundraising plea to GOP donors, asking them to “help strengthen our House majority” by supporting Estes. The National Republican Congressional Committee sponsored a TV ad buy against Thompson. Vice President Mike Pence also recorded a robocall for Estes, who was joined by Texas Sen. Ted Cruz at a rally in Wichita on Monday.

“That’s the best indicator of any that there’s some possibility of an upset,” said Burdett Loomis, a political science professor at the University of Kansas who studies elections in the state. He said the the push by national party leaders suggests they might have data that foretells a competitive election. (There has not been much public polling on the race, which has also not drawn much attention from the Democratic Party at large.)

Kansas’ 4th district is a deep shade of Republican red. GOP lawmakers have held the seat in question for more than two decades. Pompeo won by more than 30 points in November, earning 61% of the vote compared to his Democratic rival’s paltry 29.4%. The district also voted for Trump and Romney by comfortable margins in 2016 and 2012, respectively.

That’s why many strategists say a Democratic upset is still unlikely.

“It’s just still probably a bridge too far for Kansas Democrats,” Loomis said, adding that while an outright victory is unlikely, even a “decent showing” by Thompson would give Democrats enough hope to help drive fundraising in future races.

“It shouldn’t even be close, and it is. And the fact that it is shows that even in the bright red state of Kansas, Trump and Trumpism are not playing particularly well,” said Democratic strategist Steve McMahon. “These early elections are like a canary in the coal mine. Watch them carefully because there are important lessons to be learned.”

Several special elections are set to take place in coming months to fill seats left vacant by Trump’s Cabinet picks. Generating the most attention is a special election in Georgia, where a young Democrat, Jon Ossoff, has drawn millions in donations — more than any of his opponents.

Still, the very fact that these are special elections means they might not be representative of larger political trends.

“One of the things that makes special elections special is that turnout is hard to predict, and it’s not necessarily the same electorate that will show up in the normally scheduled election,” said Nathan Gonzales, editor of Inside Elections, which aims to provide nonpartisan political analysis.

Gonzales pointed to a Pennsylvania special election in May 2010, when Democrats held on to a congressional seat in a district that had not voted for then-President Obama — a result that turned out to be less than prophetic. Months later, Republicans gained 63 seats in the midterm elections and won control of the House.

“You’ve got to really be careful about over-learning any lessons from one race in a particular congressional district,” Loomis said. 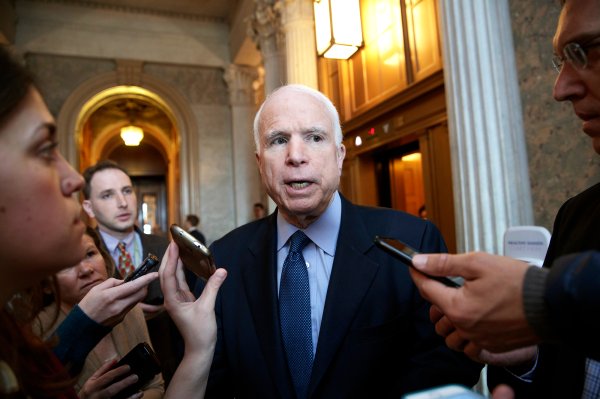 Sen. John McCain on Syrian Airstrikes: 'We Should Have Cratered the Runways’
Next Up: Editor's Pick