50 Years Ago This Week: Brazil's Place in a Changing World

The occasion of the Punta del Este conference of leaders from the Americas — at which President Lyndon Johnson had apparently made quite a positive impression — was reason for TIME to zero in on Brazil and its newly-installed president, Artur da Costa e Silva. As the magazine noted, Johnson could rally the proverbial troops for economic cooperation and modernization, but it would likely fall to Costa — leader of the nation that made up half the area, wealth and population of South America — to make the big ideas to come out of the conference into reality.

Costa’s road to the presidency wasn’t exactly simple, TIME explained. In 1930, while Costa was in jail for his association with a failed rebellion against the “powerful landowners who were running Brazil,” a coup led by Getulio Vargas succeeded in replacing them with a “semi-Fascist dictatorship.” Costa later received a position in government, climbing the career ladder until he was eventually involved in another coup. When Vargas was killed and the next president, Juscelino Kubitschek, saw the deficit and corruption balloon, a new leader came to power, Jánio Quadros—until a weird turn: “in a fit of pique, Quadros simply resigned one day and sailed off to Europe,” TIME reported. Quadros’ VP, Joao Goulart, “a leftist demagogue who at the very moment of Quadros’ resignation was in Peking chatting with Mao Tse-tung,” came to power.

The Brazilian economy plunged under Goulart, leading to yet another incident of the military — in which Costa was by then a powerful leader — deposing the President. After that coup, Costa took control of the whole military and a man named Humberto Castello Branco became head of government, beginning a series of improvements. When his term was over, Costa finally ran for president, and was elected by the Congress to lead a country that saw much potential despite widespread poverty and illiteracy. “Costa e Silva has promised to humanize the revolution launched by his austere and humorless predecessor—but he has also made it clear that he intends to carry through on the many basic reforms that Castello began,” the magazine explained.

It was too early to say. Though his countrymen were embracing him as “the essence of the middle-class Brazilian,” TIME noted, “optimism of the sort that has drenched Brazil in the past like blinding sunshine must wait on surer signs that, having reached the take-off point, the giant of the south will really take off.”

Taking to the streets: It was a week of protest, the national news section reported, in which more than 100,000 people in New York City and more than 50,000 in San Francisco gathered to express their continued opposition to the War in Vietnam. Though the scenes of protest are described as exactly the 1960s carnival readers 50 years later might expect, the more interesting section gets at the concern over Martin Luther King Jr.’s decision to take up the cause. Not only was he associating with Civil Rights leaders whose counter-nonviolence positions had previously made them anathema to his work, he also prompted even some of his most loyal followers to wonder whether he was spreading the movement too thin.

Partial repayment: Almost exactly 25 years after Franklin Roosevelt signed the Executive Order that made it possible for Japanese-Americans to be sent to internment camps during World War II, the Supreme Court ruled that even those who had not promptly filed for repayment of their seized property were owed reimbursement.

Next to the bench: A story that might interest those who followed Neil Gorsuch’s unconventional path to the Supreme Court is this examination of the choices facing Lyndon Johnson as he decided whom to nominate for the Supreme Court seat vacated by Justice Tom C. Clark. A “long-delayed confirmation may be a serious loss of political face,” the story noted. Also, as proof that a black nominee might cause a backlash among Senators and a backlash to the backlash among black voters, the magazine offered the story of the drawn-out and much-delayed confirmation of Thurgood Marshall to the position of Solicitor General. Spoiler alert: he got the seat.

Great vintage ad: This is quite a way to advertise a newspaper — by making a dress out of it.

Coming up next week: A coup in Greece 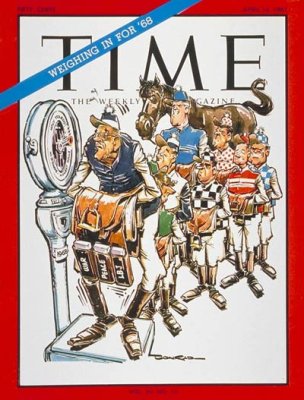 50 Years Ago This Week: Why the Presidential Campaign Starts Earlier Than Ever
Next Up: Editor's Pick