President Trump struck an unusually positive tone welcoming Neil Gorsuch as the newest Associate Justice on the Supreme Court, praising the American system of government and expressing gratitude to numerous people involved in the process.

“Spring is really the perfect backdrop for this joyful gathering of friends, because together we are in a process of reviewing and renewing and also rebuilding our country,” Trump said on a sunny Monday morning in the Rose Garden. “A new optimism is sweeping across our land and a new faith in America is filling our hearts and lifting our sights.”

Gorsuch’s confirmation came after a year of bruising political fights, but it’s an unmitigated win for Trump, who chose Gorsuch from a list of judges he released during the campaign to appease queasy conservatives and then nominated him within two weeks of taking office. It’s a fact he didn’t let go unmentioned.

“I’ve always heard that the most important thing that a President of the United States does is appoint people, hopefully great people like this appointment, to the United States Supreme Court,” Trump said. “And I got it done in the first 100 days, that’s even nice. You think that’s easy?”

Trump also thanked Senate Majority Leader Mitch McConnell for “all he did to make this achievement possible” and Senate Judiciary Chairman Chuck Grassley for a “fair and professional” hearing.

Gorsuch’s former boss, Justice Anthony Kennedy, administered the oath to him. (Gorsuch took two separate oaths, one in a private ceremony at the court with the oath administered by Chief Justice John Roberts, and the second at the public White House ceremony.)

Gorsuch clerked for Kennedy, and he’s now the first ever former clerk joining his boss on the bench. He referred to Kennedy as his “mentor” and noted that Kennedy also administered his oath 11 years ago when he became a circuit court judge.

“It is a fitting testament to Justice Kennedy’s impact,” Trump said of the pair’s historic relationship. “That’s sort of a big deal isn’t it? I sort of like that.”

Trump also told Gorsuch that “our country is counting on you to be wise impartial and fair,” and predicted that he would go down as “one of the truly great justices” in the Court’s history. He praised the separation of powers outlined in the Constitution and noted that all three branches of government were represented at the Rose Garden event.

In the past, Trump has criticized the judiciary, both during his campaign and since he has become president. When in February he referred to a federal judge who ruled against him as a “so-called judge,” Gorsuch himself even called the comments “demoralizing” and “disheartening.”

But it was a warm and amiable event Monday, with Gorsuch saying that “this process has reminded me just how outrageously blessed I am” and that he is “humbled by the trust placed in me today.”

“I look forward to many happy years together,” Gorsuch told the eight other members of the Supreme Court.

Gorsuch’s ascendancy comes after a record-breaking 422-day vacancy on the high court after late-Justice Antonin Scalia died in February 2016.

Addressing Scalia’s family, Gorsuch said, “I won’t ever forget that the seat I inherit today is that of a very, very great man.”

Most Popular on TIME
1
What Would a Biden Presidency Look Like? Obama’s White House Photographer Picks Six Photos That Offer Clues
2
There's No Evidence That Vitamin-D Prevents Coronavirus
3
Behind Trump's Push for 'Patriotic Education' in U.S. History 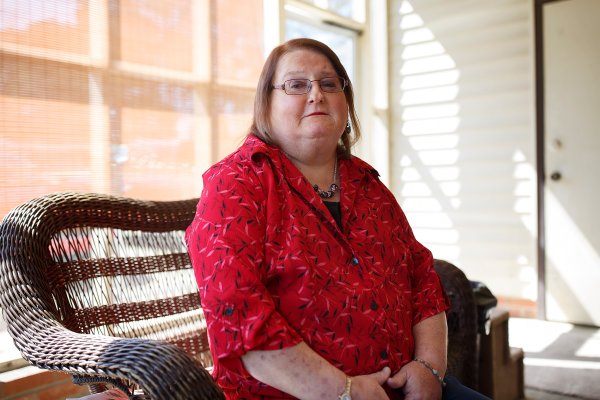