National Security Adviser H.R. McMaster said the U.S. wants to defeat the Islamic State and remove Syrian President Bashar Assad — although not in a unilateral move — in his first televised interview.

McMaster left open the possibility for further military action against Syria following a missile strike last week ordered by President Trump in response to the country’s chemical attack against rebel forces that killed 87 people including children.

Speaking on Fox News Sunday, McMaster said Trump was seeking a “political solution” for a regime change in Syria.

“It’s very difficult to understand how a political solution could result form the continuation of the Assad regime,” McMaster said. “Now, we are not saying that we are the ones who are going to effect that change. What we are saying is, other countries have to ask themselves some hard questions. Russia should ask themselves … why are we supporting this murderous regime that is committing mass murder of its own population?”

McMaster said U.S. goals of both destroying ISIS and ousting Assad were “simultaneous.” He did not rule out further strikes on Syria if Assad continued egregious attacks against rebel forces with chemical or other weapons.

“We are prepared to do more,” he said. “The President will make whatever decision he thinks is in the best interest of the American people.” 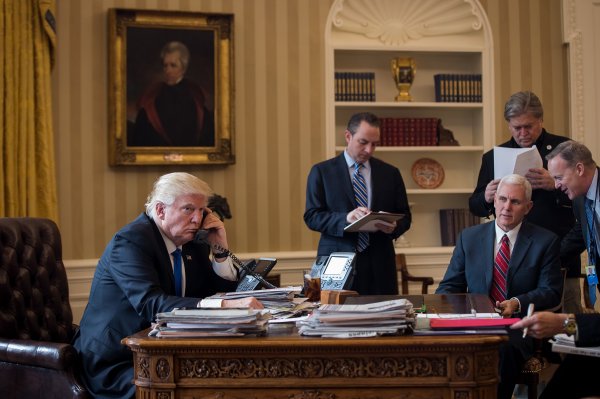 White House Denies Rumors of a Staff Shake-Up
Next Up: Editor's Pick