A pair of bombings claimed by ISIS targeting Egypt’s Christian community killed at least 44 people on Sunday, illustrating the militant group’s ability to launch attacks across the country and the threat it poses to the country’s millions of Coptic Christians.

The attacks were timed for the religious holiday of Palm Sunday, and come just weeks before Pope Francis is due to visit Egypt.

Shortly before 10am, a bomb planted under a pew at the Mar Girgis church in the Nile Delta town of Tanta struck worshippers, killing 27 people and injuring a further 78, according to the Egyptian Health Ministry.

Hours later, as Christians in Alexandria gathered at St Marks Coptic Orthodox Cathedral to hear a sermon from Pope Tawadros II, a suicide bomber detonated a device as police were trying to prevent him entering the church. Three officers were killed as well as 14 civilians, and a further 48 were injured.

Egypt’s President Abdel-Fatah al Sisi ordered troops to be deployed across the country following the incidents. This did little to stem the anger of many of Egypt’s Coptic Christians, however, who fear that they have become the primary target for ISIS attacks despite the efforts of the Egyptian state to protect them.

“As a Coptic Christian, I no longer feel safe in Egypt,” said Hany Ezat, whose cousin Rafet Habshy, the Deacon of Mar Girgis Church, was injured in the attack. “The security forces don’t care about us … Each time, the security forces promise to protect us but nothing happens. Events like today will keep happening.”

Egypt’s military has been fighting militants now aligned to ISIS in the Sinai Peninsula — a strip of land between the Mediterranean Sea and the Red Sea which borders Israel to the east — since the 2011 revolution, yet these latest attacks show the fighters are able to strike far beyond the Sinai.

And when they do, they often single out Christians — such as in the bombing of St Mark’s Cathedral in Cairo last December, which killed 29 people. The Coptic Orthodox Church of Alexandria, thought to have been founded by St Mark in the 1st century, represents an estimated 10% of Egypt’s population of 92 million.

In February, ISIS pledged further attacks on Christians across Egypt when claiming responsibility for the December bombing, causing an estimated 250 Christians to flee. Local news reports state that Egyptian police also defused a bomb placed in the Mar Girgis church on March 29 this year.

ISIS is singling out Christians for attacks to embarrass the state, according to some experts. “Attacking Copts has more impact than the deaths of military conscripts in the Sinai desert,” said Mohannad Sabry, author of the book Sinai: Egypt’s Linchpin, Gaza’s Lifeline, Israel’s Nightmare. “ISIS is strategically shifting to attacking Copts as a means of propaganda, as it shows the Egyptian state is unable to protect minorities.”

These attacks are especially pronounced in the Sinai, where ISIS has been targeting Christians living in the coastal town of Arish. In late February, the bodies of two men who had been kidnapped and murdered by ISIS militants were thrown behind a school in the centre of the town, suggesting to many that the group is now able to operate in the centre of Arish with impunity.

“ISIS is successfully spreading in Sinai- it now has a clear ability to launch attacks inside Arish, and is also threatening the central Sinai regions closer to the Israeli border, or even southern tourist resorts,” said Sabry. Israel issued an immediate warning to any of its citizens vacationing in Sinai to leave the peninsula on March 28, citing imminent threat of attack.

But there are also deeper sectarian impulses in the targeting of Christians, according to Timothy E. Kaldas, of the Washington-based Tahrir Institute for Middle East Policy. “Many Islamists in Egypt see the Coptic Church as partly responsible for the coup against former Islamist President Mohammed Morsi and have regularly engaged in sectarian incitement against Christians since.”

“While the Church has avoided publicly criticising the state and government security agencies over past attacks, Christian civilians have voiced their frustrations. Anti-government protests erupted after the bombing at Cairo’s St Peter’s Church in December,” said Kaldas. “It remains unclear what, if any, special security measures were in fact undertaken given the police knew the church in Tanta was being targeted and today, Palm Sunday, comes with a surge in attendance,” he said.

“If you’re a Coptic Christian in Egypt today, you’re now asking many questions,” said Samuel Tadros, a senior fellow at the Washington-based Hudson Institute who writes frequently on sectarian relations in Egypt. “What has the state done, why are we being targeted, am I safe any longer and should I leave Egypt.”

Some in Egypt’s government objected to the idea that Sunday’s attacks demonstrate any kind of security failure. “Egypt’s security has been successful in striking terrorism in different locations in Egypt,” said General Yehia Kidwany, deputy head of Egypt’s Parliamentary Defense and National Security committee and a former deputy head of the Egyptian intelligence service. “There is absolutely no failure to perform. At the same time there is no complete security performance in any country in the world – the gaps in security are what these terrorists use to attack.”

Yet the timing of the attack will embarrass al-Sisi, who met with President Donald Trump in Washington only days ago and will have wanted to impress upon him Egypt’s leadership in counterterrorism efforts in the Middle East. Egypt receives $1.3 billion in U.S. military aid each year, much of it intended for the purchase of weapons used in the battle to secure the increasingly unstable Sinai Peninsula.

Now Pope Francis is due to arrive in Egypt later this month, in a visit intended to spread a message of peace and unity. If it does go ahead in the face of escalated security risks, it might give Egypt an opportunity to prove it values and secures the wellbeing of its Christian citizens, especially during large gatherings. “The regime needs this visit more than ever,” said Tadros. 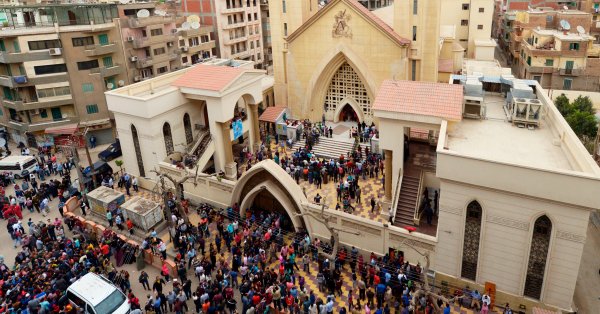 See the Destruction Caused by the Egyptian Church Explosions
Next Up: Editor's Pick