President Trump Asked for Border Wall Plans. This Group Suggested a Hyperloop Instead

When the deadline came for submissions to build President Trump’s proposed wall along the Mexican border earlier this month, many went for a straightforward design.

But not every plan is as straightforward. Some took the design process as a chance to express outlandish ideas (a 100-foot trench filled with nuclear waste), troll the President or just put forward their own utopian visions of how the border could work.

Calling themselves the MADE collective, one group of 14 engineers, architects, ecologists, urban planners based in the U.S. and Mexico submitted a plan that’s basically the opposite from a “big, beautiful wall” entirely.

The group proposed a shared territory between the U.S. and Mexico that would allow people and goods to flow freely between the two countries. A hyperloop — a type of mass transit that achieves super-fast speeds using low-pressure tubes — would stretch from San Diego/Tijuana, across the southwestern region to the Texas/Mexico border—connecting the cities that would form the new, independent Otra Nation. Commissioners from the area would be elected to represent the Otra Nation within the U.S. and Mexican government. Ninety thousand square kilometers of solar panels would allow the territory to create its own energy.

The full proposal is laid out on a detailed website that includes photos, an application for their high-tech ID system, and a Change.org petition that will be hand-delivered to the presidents of the U.S. and Mexico if it gets 250,000 signatures.

The whole thing sounds a bit like a scenario thought up by an amateur futurist late at night, but the creators behind the project insist they are sincere. In an interview with TIME, Memo Cruz, a member of the MADE collective based in Southern California, said the group consulted with constitutional lawyers and combined their collective knowledge to create a feasible—though notably far-fetched—plan.

Cruz admits there is about a one in a million chance their proposal gets the time of day (in fact, he calls it an “eternally optimistic” plan) but he says the group hopes it at least sparks conversations about how border communities currently work and function and the impact a physical barrier could have on the current ecosystem. They believe the citizens of the U.S. and Mexico should have a say in a plan that could change their lives for generations to come.

“The border situation is a very serious topic and its much more nuanced than a physical boundary,” Cruz says. “We understand the relationship between border cities both economically and through transit and so we wanted to have a positive, proactive solution,” based on economic stability, security based on trust, and collaborative government structures.

The MADE collective wasn’t the only group to take a whimsical approach to the submission process. An informal discussion held by a group of Pittsburgh based artists led to the development of a series of proposals including a border wall made of pipe organs, a string of hammocks and a memorial to those who have died attempting to cross the border into the U.S. Artist Jennifer Meridian sketched out their thoughts, which were formally submitted to the federal government and shared on her Instagram. Leah Patgorski was among the artists tossing out ideas about alternative walls and she told TIME they think the idea of border wall itself is preposterous.

“It’s obvious what they’re looking for and the motivations behind it so we thought it warranted a response that had sort of a different take,” she said. “As artists and designers we’re in a position to shed a different light on these things.”

Cruz insists their plan wasn’t made in protest and is a serious-minded effort to present an alternative solution to President Trump, though they recognize that some will laugh at it. Since reports of their design went public last week they’ve received angry responses from people on the left who are angry they’re even trying to help the president and those on the right who’ve threatened to “drop off” undocumented immigrants at their respective doorsteps. But the criticism has not bothered the group. They’re currently hoping to get enough signatures on their petition to push the governments of the U.S. and Mexico, both of which were sent copies of their plan, to come together and discuss the development of Otra Nation.

“There are only two people we want to hear from: (Mexican President Enrique) Peña Nieto and Donald Trump,” Cruz said. 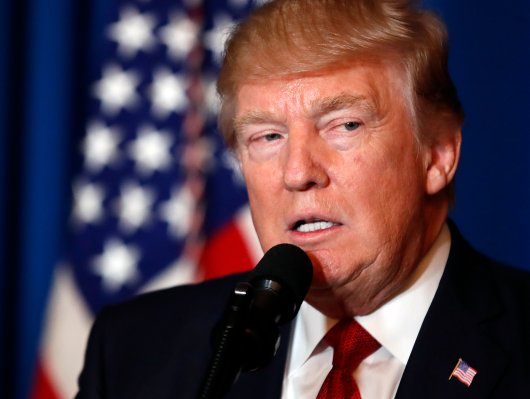