The Trump Administration has not set out in clear terms the legal grounds under domestic and international law for the missile strikes against Syria. Apparently — and perhaps tellingly — the first draft of the Administration’s internal talking points did not include a legal justification. Various experts have spoken out, but the Administration’s own lack of attention to the legal issues bears notice.

The Administration correctly assumes that it can put together a defensible case for these strikes under U.S. law. It will argue that it did not require prior congressional authorization of an operation like this one, limited in scope and duration, because it did not conduct a “war,” and the President acted on his authority to secure a national interest. Not all members of Congress agree, but many members do, including GOP leader Mitch McConnell.

Should it appear, however, that the president and his national security team have established a policy toward the Assad regime that could reasonably be anticipated to require periodic military action, the legal ground on which the Administration stands could shift. Moreover, Trump has argued in the past that military interventions are risky, if not typically ill advised, and to be undertaken only with congressional support. If he is suddenly moving now toward a more expansive view of unilateral executive authority to use force, he will come under strong pressure to explain this about-face.

The Administration’s international legal position is so far unclear. One question is whether Trump and his team will insist that the strikes were legal, or, as the Clinton Administration argued regarding Kosovo in 1999, at least “legitimate,” when judged by moral and policy imperatives. Mounting a fully successful, conventional legal argument will be a challenge in circumstances where there is neither a plausible appeal to self-defense nor authorization from the United States Security Council.

Perhaps the Administration will look to support from international lawyers who are working to advance a well-crafted legal theory to support humanitarian intervention. But this is not a generally accepted exception to the U.N. Charter’s limits on use of force, nor one that the United States has explicitly embraced. And like any Administration, this one will carefully consider which of the available legal positions is politically tolerable. It would confound expectations for this president to adopt a theory that implies readiness to deploy force around the globe for humanitarian ends.

At the same time, the odds of this government falling back on a claim of “legitimacy,” and conceding (as Russia is contending) that its actions were illegal, seem low. So it may keep its international legal argument obscure, which is the only alternative to exposing it as clearly untenable.

It may well be that the key tests of this or any administration’s commitment to the rule of law are the structure and transparency of its legal advisory process, and not only the formal legal position that the lawyers eventually come up with. Always important, this test might apply with particular force to an Administration led by a president who has described himself as a “very instinctual person.” In the case of the Syria, the President reported that the images flooding in from Idlib Province transformed his view of the Assad regime, and he acted quickly, trusting in his reactions and emphasizing the personal character of his responsibility. He was not, of course, alone in the revulsion he felt toward these barbaric chemical weapon attacks. But the law and legal process serve, critically, to channel the intuitions and emotions of those with great power: They set limits.

So it is especially important that we know the role of legal process and lawyers in the decision to launch these missile strikes and the precise basis on which the Administration acted. Was it a fully legal basis, or “legitimate,” or something new, and how was the conclusion reached? It is not reassuring that the answers did not make their way into the first round of talking points, and we are still waiting for them. 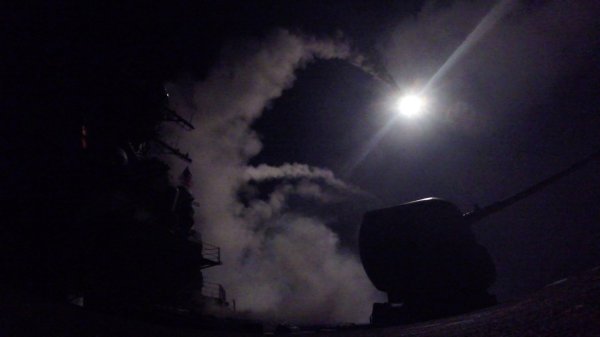 U.S. Strikes in Syria Are a Turning Point for the World
Next Up: Editor's Pick