Dymitr Szawlugo, a Polish soldier who helped care for the bear, in Italy in late 1944 after the Battle of Monte Cassino.
Courtesy of Andy Szawlugo
By Olivia B. Waxman

A list of history’s most heroic animals might include famous names like Balto, the Siberian husky who helped transport diphtheria antitoxin 674 miles across Alaska, or Laika, the Soviet cosmonaut dog who was the first living creature in space, or even Dolly the sheep, the first example of successful cloning of a mammal from an adult cell.

But ask some Polish military veterans and they’d probably cite another creature: Wojtek the bear, a 500-to-600-pound brown bear that was essentially adopted by the 22nd Transport Company’s Artillery Division in the Polish 2nd Corps, and served as a morale booster to the troops during World War II.

It was exactly 75 years ago this Saturday, on April 8, 1942, that the cub was discovered in the mountains of Iran, by a group of Polish prisoners of war who were being transported from a Siberian gulag through the Middle East to Alexandra, Egypt. From there, they were shipped off to Europe, most famously to fight in the 1944 Battle of Monte Cassino in Italy. “The Allies got together in 1942 and made a pact with Stalin in which they could release the Poles to join the Allies’ troops,” according to Aileen Orr, author of Wojtek the Bear: Polish War Hero.

Nursing the bear with a bottle of condensed milk in a vodka bottle, the soldiers treated Wojtek like a baby, perhaps because their own families had been torn apart by the war, she explains.

But pretty soon, as bear cubs are wont to do, Wojtek grew up.

“He would accept lit cigarettes, take a puff and swallow them,” Dymitr Szawlugo, one of the soldiers who took care of the bear, once wrote. “He loved to drink from a beer bottle, and when it was empty, he would look through the opening to see where the rest of the beer was.”

While in Egypt and the Middle East, Wojtek needed all of the refreshing liquids he could find in the sweltering heat. According to Brendan Foley, an author working on a film inspired by the bear’s life, the bear would chase after oranges that the men used for grenade practice. He learned how to break into the communal shower huts and turn on the shower on his own, which was a problem because the water was rationed and his ingeniousness would sometimes result in water shortages. The men even taught the bear how to pick up new recruits and hold them upside by the boots to make the rookies think they were getting eaten.

During the Battle of Monte Cassino, the bear was seen on the front lines carrying what was thought to be live ammunition to help load the guns. Henryk Zacharewicz, another member of the 22nd Transport Company, said the bear was really just carrying empty ammo crates and used shells, according to Dymitr’s son Andy Szawlugo, who is now a dentist in Burlington, Ontario.

The insignia of the 22nd Artillery Support Company of the 2nd Polish Corps, meant to illustrate Wojtek the bear carrying an ammo shell at the Battle of Monte Cassino.
Courtesy of Andy Szawlugo

The press corps had a field day with the image nonetheless, and the bear became a cult hero. The regiment changed its insignia to an image of the bear and an ammo shell and boasted that the bear was an “enlisted” soldier, giving him a rank and number.

When the war ended, the Polish troops scattered all over the world, but it wasn’t clear where the bear would live. A political tug of war of sorts began. The bear’s caretakers didn’t want him to go back to Poland because they were afraid that the fledgling Soviet-controlled government would adopt the bear as a symbol for communism, which was the opposite of what those Polish troops had been fighting for, according Foley.

He ended up in Scotland, in a village called Hutton in Berwickshire, on a farm where he lived with other former Polish fighters who were being lodged there temporarily after the war.

That’s where the story gets personal for Orr. Her grandfather was a Scottish soldier who helped train the Poles from the Siberian gulag when they were in Baghdad, and she ended up marrying the man who ran the camp where they had stayed. She currently lives on that very farm, which apparently still has the bear’s claw marks etched into the trees in her garden.

So she grew up hearing stories about how people at the Scottish camp would feed the bear sweets like honey and jam, attempt to wrestle him, and kick around soccer ball with him. “He was very much a part of the community and attended dances, concerts, local children’s parties,” she says. “He was like a dog. He was almost human.”

The bear died in 1963, partly of damage to his esophagus, perhaps from swallowing cigarettes, Foley suggests. A bronze statue of the bear was unveiled in central Edinburgh in November 2015. 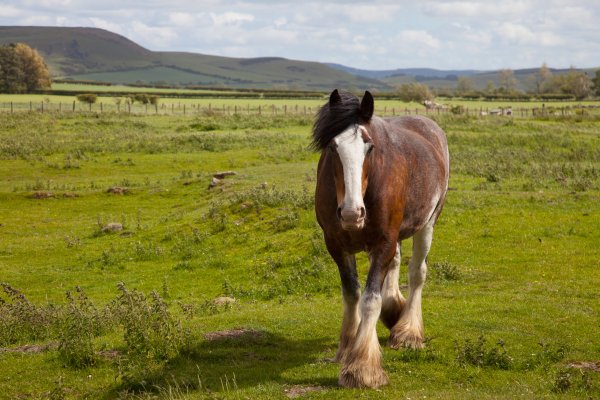 Hero Girl Shows Ultimate Selfie Dedication by Sneaking a Horse Into Her Parent's Bathroom
Next Up: Editor's Pick