The United Nations Security Council is meeting Friday to discuss the U.S.’ military airstrike on Syria, ordered by President Trump on Thursday in response to the widely-condemned chemical attack in the Syrian province of Idlib earlier this week.

Around 48 hours after the deadly attack took place, Trump’s administration reversed its foreign policy and launched 59 Tomahawk missiles at Syrian President Bashar Assad’s regime, with the president claiming the strike was in the “vital national security interest” of the U.S.

Assad’s office has called the U.S. missile strike “reckless,” “shortsighted” and “irresponsible,” but many world leaders — including the heads of the U.K., Turkey, Germany, France and Israel, as well as European Council President Donald Tusk — have supported Trump’s bold action.

The U.N. Security Council is tasked with maintaining international peace and can impose sanctions if it determines an act of aggression has taken place. The meeting was set to begin at about 11.30 a.m. eastern time. Watch live above. 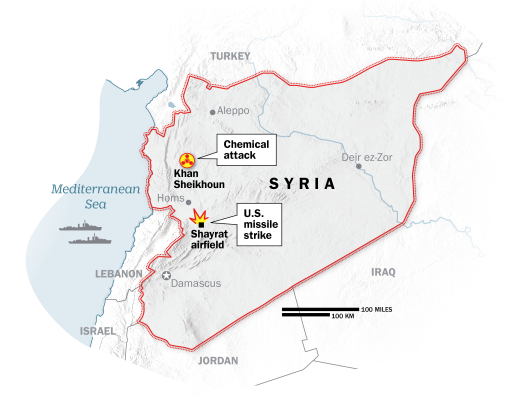 This Map Shows Where the Syria Chemical Attack and U.S. Missile Strikes Took Place
Next Up: Editor's Pick