'One Airbase Is Not Enough.' Syrians Opposed to Assad Welcome Strike, But Hope for More

Adham Sahloul woke up Friday morning to a push notification telling him the U.S. had bombed a Syrian airbase. “I thought great. Alright, this is good,” says the Syrian-American from Chicago, who currently lives in Turkey. “I was happy.”

Like so many Syrians opposed to the rule of President Bashar Al-Assad, Sahloul welcomed President Trump’s rockets on the Shayrat airbase near Homs this morning. “We’ve been waiting for the U.S. to do something principled, something to change the status quo,” says Sahloul. “Anything to indicate that the use of chemical weapons is unacceptable.”

In 2013 Sahloul watched with disappointment as then President Barack Obama drew his “red line” at chemical weapons, and then dissolved it, instead striking a deal through Moscow that saw Syria promise to give up its chemical arsenal.

For doctors like Dr. Abdel Hay Tennari, who spoke with TIME after treating victims of the chemical attack on Khan Sheikhoun on Tuesday, today’s retaliation offered a moment of relief. President Trump says the Syrian planes that carried out the chemical attack this week, took off from the Shayrat airbase that his Tomahawk cruise missiles hit today.

“Everyone was worried there would be another chemical attack on Khan Sheikhoun,” says Tennari. Photos posted online showed residents Khan Sheikhoun holding images of child victims and placards saying “massacres with international license” and “chemical massacre.”

But Tennari points out that most Syrians are not killed by Sarin or chlorine, but by the regular weapons that seem to be acceptable to those international powers outraged by the chemical attacks. “Everyday we have the same number of deaths– 70, 80, 100, just by traditional bombs,” says Tennari. “We’ve been asking for a no-fly zone in Syria. Everyone will be happy when Assad’s air force will be neutralized. But one airbase is not enough.”

Few Syrians and analysts seem to think this is the start of a campaign to take out Assad’s air force completely, or remove him from power. “I like the idea that the regime has finally been punished for something. But this seems like a one-off,” says Bassam al-Kuwaiti, managing director of RM Team, a research and monitoring group working with organizations in Syria. “There’s no real threat to the regime itself.”

Without that threat, he worries today’s strikes maybe too little, too late. He does say that the speed with which Trump took these retaliatory measures, shows that such intervention was possible under President Obama. “All the talk before about how complicated it was to act in Syria wasn’t true,” says Kuwaiti. “As long as the political will is there, action is possible. Change is possible.”

There remains the possibility however that Trump’s act of political will could be seen more as a provocation than a deterrent. Syrian state television showed footage of the overnight attack and the Syrian army called it “blatant aggression” by the U.S. Russia said it has plans to bolster air defense systems in Syria after the attack.

And some Syrians who want Assad out may look just over the border to Iraq where U.S. intervention drew the country into a decade of violence and increased sectarian tensions that helped foster the growth of the Islamic State of Iraq and Syria (ISIS).

But those who are asking for more intervention point to less recent history. “There are some voices saying, ‘American intervention has never helped anyone’ but look at the Balkans in the 90s,” says Sahloul, in reference to U.S. strikes against Serbian forces and infrastructure. “That intervention saved countless lives and pushed forward political negotiations.” 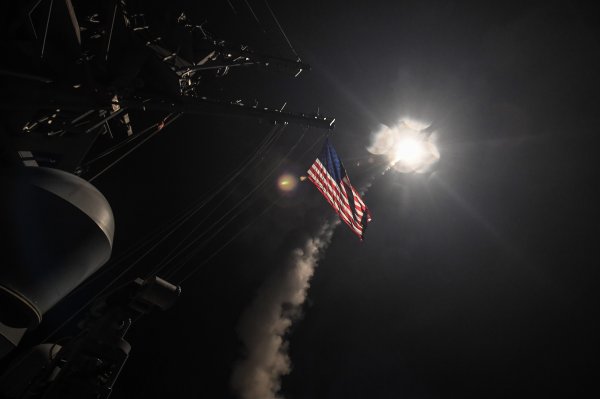 Does the U.S. Strike on Syria Signal a Turning Point in the Civil War?
Next Up: Editor's Pick