With Neil Gorsuch confirmed as a Supreme Court justice, it looks like a year of bitter partisan battles and congressional jiu jitsu has come to an end. But beneath the surface, the fight for late-Justice Antonin Scalia’s seat left scars that will alter the federal government for years to come.

Newly-minted Justice Gorsuch brings the highest court in the land back to the 5-4 conservative-liberal split it had before Scalia passed away in February 2016. In many ways, he’s a natural heir to Scalia: Gorsuch’s core judicial philosophy and writing style are strikingly similar to the man he’s replacing. Both are originalists, who interpret the Constitution based on the intent of the founders, and textualists, who look at the words of the document rather than legislative history. And both are known for their colorful language and incisive opinions.

But the path that took Gorsuch to that seat was anything but seamless.

The fight began in March 2016 when President Obama nominated Judge Merrick Garland to fill the seat. The same day, Majority Leader Mitch McConnell said the Senate wouldn’t act on the nomination and would instead wait until after the presidential election. Eight months of squabbling followed, as Democrats blasted Republicans for partisan obstruction and Republicans reminded Democrats that it was then-Sen. Joe Biden who argued in 1992 that Supreme Court vacancies in an election year shouldn’t be filled until after the election.

Some thought there was a chance Garland, widely considered to be a moderate liberal, would be confirmed in a lame-duck session if Hillary Clinton won the election. Republican Sen. Orrin Hatch told National Journal that he privately met with Garland to tell him he’d vote for his confirmation “when Hillary won.”

But then Trump won instead, after trying to appease queasy Republicans by vowing to pick a conservative judge off a list he had circulated months before. Garland quietly returned to the bench on the Court of Appeals on the D.C. Circuit, but his ghost loomed over each fight in the next four months that ended in a Senate rule change nobody wanted.

Trump officially nominated Gorsuch at the end of January, saying he “took the task of this nomination very seriously” and that he selected a judge with “outstanding legal skills, a brilliant mind [and] tremendous discipline.” But he hadn’t even named Gorsuch yet before Democrats began saying they would filibuster anyone Trump put up. “This is a stolen seat,” Oregon Sen. Jeff Merkley said that week, fuming over Garland. “We will use every lever in our power to stop this.”

In the following weeks, Gorsuch met with more than 70 senators, trying to charm them with his general geniality and even distancing himself from Trump in certain areas. He largely avoided drama during his confirmation hearings at the end of March, using circumspect evasions and folksy humility to leave Senate Judiciary Committee Democrats without much to push against. But their anger over Garland was palpable. Nearly every Democratic member of the committee mentioned Garland in his or her questioning, with Vermont Sen. Patrick Leahy even asking Gorsuch directly if he thought Garland had been treated fairly.

“I can’t get involved in politics,” Gorsuch responded.

“I can express an opinion,” Leahy shot back. “I think it was shameful.”

Meanwhile, the Democrats were making a serious effort to filibuster Gorsuch’s nomination. Sixty votes are needed for cloture, which ends debate in the Senate. A filibuster is to deny cloture, thereby preventing a measure from ever getting an up-or-down vote. Republicans said they would change Senate rules in response, triggering the so-called nuclear option which would allow them to confirm Gorsuch without needing 60 bipartisan votes for cloture.

“The answer isn’t to change the rules, it’s to change the nominee,” Senate Minority Leader Chuck Schumer warned of the high-stakes game of chicken shaping up in the Senate.

Many Republicans didn’t want to go nuclear. “I believe our actions will haunt us,” Arizona Sen. John McCain of Arizona said on the Senate floor Wednesday. “We will see more and more nominees from the extremes of both left and right.” But they felt their hands were forced by the Democrats, who first invoked the nuclear option in 2013 for lower court nominees and were now set to pull off the first-ever partisan filibuster of a Supreme Court nominee.

“I have no choice,” McCain said. “Because we need to confirm Gorsuch.”

Thus the stakes were set for the final showdown in the first week of April. Democrats resented Republicans for holding open a Supreme Court seat for a record-breaking amount of time. Republicans were furious at Democrats for mounting an unprecedented political filibuster of a qualified nominee. Both sides were sliding towards an outcome they didn’t want.

On Thursday, they did it. Democrats denied the 60 votes needed to end debate, and Republicans changed the rules in response. It was a moment marked more by resignation than anger.

“There was a lividness that was on the floor,” Republican Sen. Bob Corker said of when Democrats went nuclear in 2013. “This time it was very sanitary. Unemotional. Telegraphed in advance, planned in advance.”

Scuttling the filibuster for Supreme Court nominees will give more power to the president in future nominations if his party also controls the Senate, because the nominee can be confirmed on a simple majority. And it means the Supreme Court could eventually become populated with more ideologically extreme judges, since there will be less incentive to nominate people who would get bipartisan support.

“The dark deed is done,” Merkley tweeted ominously Thursday. It was “one of my saddest days in the Senate,” Democratic Sen. Richard Blumenthal said.

Trump said that if future vacancies come up during his term, he won’t let the events of this week affect his choice. “I don’t think the nuclear option has anything to do with it at all,” he told reporters Thursday of his next pick.

At the very least, using the nuclear option to confirm Gorsuch cemented a conservative majority on the Supreme Court for the foreseeable future. There are still four more years before a Democratic president could potentially nominate a justice, and there are some aging members and retirement rumors on the liberal and swing-vote wings of the court.

The events of the past year have only increased the rage on both sides, and the steps each party took have changed this process forever.

“The truth is,” Schumer said wearily Thursday, “over the long history of partisan combat over judicial nominations, there is blame on both sides.” 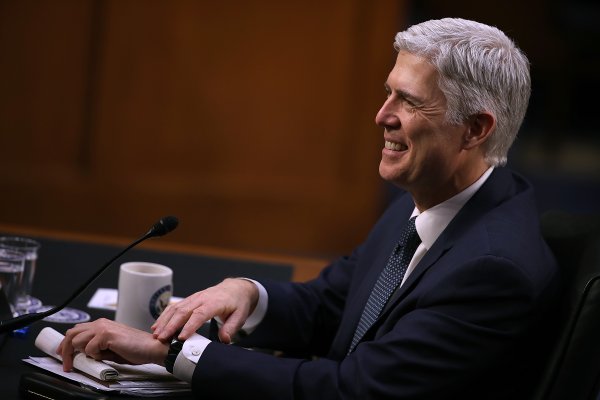