Norway Is Building the World’s First Tunnel for Ships

In this computer rendered image a ferry approaches the entrance of the Stad Ship Tunnel for ships in Norway on April 6, 2017. Norway plans to build the world's first tunnel for ships, a 1,700-meter (5,610-feet) passageway burrowed through a piece of rocky peninsula that will allow vessels to avoid a treacherous part of sea.
Snohetta/Norwegian Coastal Administration/AP
By Zamira Rahim

Norway is aiming to build a tunnel for ships, stretching to over 5,000 feet, which will be the first of its kind.

The Stad Ship Tunnel will let ships avoid part of the Stadlandet peninsula, which is narrow and where the weather conditions pose a possible danger for ships, NBC News reports.

The tunnel will be around 118 feet wide and 162 feet tall. Ships that weigh up to 16,000 tons will be able to travel within the tunnel, which is expected to cost around $314 million.

The construction of the tunnel, which will cut through the rocky peninsula, will require engineers to take out eight million tons of rock, Terje Andreassen, the project manager, told NBC. 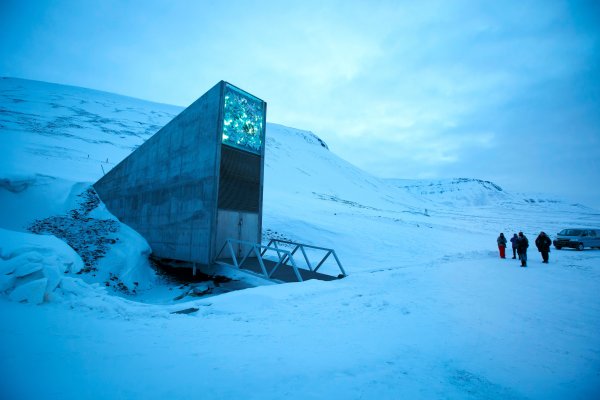 Norway Now Has Two Doomsday Vaults In Case There's an Apocalypse
Next Up: Editor's Pick