The U.S. launched an air strike on a Syrian airfield in response to President Bashar al-Assad’s regime’s chemical weapons attack on Idlib province earlier this week, which killed more than 80 civilians.

The cruise missile attack, launched by destroyers USS Porter and Ross in the eastern Mediterranean, marks the first time the U.S. has become a direct combatant against the Syrian regime.

It is also the first major military action ordered by U.S. President Donald Trump— which has since drawn a litany of reactions from the international community:

Russian President Vladimir Putin, who is a staunch ally of Assad, condemned the strike on Shayrat air base that killed around six— none of them Russian. According to Reuters, Russian officials do not believe Syria has chemical weapons and complains that the U.S. is only creating obstacles to the fight against terrorism.

“Putin views the U.S. strike on Syria as aggression against a sovereign state in violation of the norms of international law and on a made-up up pretext” Putin’s spokesman Dmitry Peskov said. “Washington’s step will inflict major damage on U.S.-Russia ties.”

Iran’s Foreign Ministry spokesman Bahram Ghasemi warned the strike would “strengthen terrorists” and further complicate the situation on the ground in Syria, AP reports. He also said Iran condemned the missile attack “regardless of the perpetrators and the victims.” The Shiite country is Assad’s other major foreign backer. It has been locked in a proxy conflict with the Sunni Saudi Arabia over influence in Syria and the region.

Foreign Minister Javad Zarif issued a series of tweets alleging that the U.S. is using military force over the “bogus” use of chemical weapons in Syria.

Turkey’s President Recep Tayyip Erdogan’s spokesman said the strike was a positive response to “war crimes of Assad” and called for a no-fly zone over Syria. Turkey has been conducting strikes against ISIS targets in the country.

“We view the U.S. missile strike carried out this morning against Shayrat air base in Homs, Syria as a positive response against the war crimes of Assad,” Kalin said in a statement. “A no-flight zone and safe haven should be realized urgently in order to prevent similar massacres.”

The country said it fully supports the strike, calling it a courageous decision by Trump. The Saudi foreign ministry expressed the kingdom’s “full support for the American military operations on military targets in Syria, which came as a response to the Syrian regime’s use of chemical weapons against innocent civilians…,” a statement said in the state news agency SPA.

The British government also offered wholehearted support of the airstrike. Prime Minister Theresa May’s office told Associated Press that the strike was “an appropriate response to the barbaric chemical weapons attack launched by the Syrian regime, and is intended to deter further attacks.”

Defence Secretary Michael Fallon says he was consulted by U.S. Defence Secretary James Mattis ahead of the strike. He told ITV News that the British government views the strike as part of an ongoing campaign and not a new military action.

“We fully support this strike – it was limited, it was appropriate, and it was designed to target the aircraft and the equipment that the U.S. believe were used in the chemical attack; and to deter President Assad from carrying out future chemical attacks” Fallon told newscaster ITV. “President Assad and the Syrian regime have continued to flout international law. We’ve caught them using chemical weapons and gases elsewhere, and this latest incident in which nearly 100 people seem to have been killed is yet another example of, if action is not taken, innocent civilians are going to die at the hands of this appalling gas. Something had to be done about it and we fully support the American action.”

Trump’s other fan on the continent seemed to distance herself from the American leader. Far-right French presidential candidate Marine Le Pen condemned the attack on Twitter.

She also told France-2 television on Friday that she was “surprised” by Trump’s sudden attack of the airfield, warning that past U.S. interventions in Libya and Iraq led to rising extremism. She also said that Trump claimed that he did not want the U.S. to be “the world’s policeman, and that’s exactly what he did yesterday.”

French President Francois Hollande and German President Angela Merkel laid the blame of the strike at Assad’s door in a joint statement on Friday. They said the attack was exactly what both countries demanded after the 2013 Ghouta gas attack that killed hundreds of people.

“After the chemical weapons massacre of April 4 on Khan Sheikhun in northwestern Syria, a military installation of the Syrian regime was destroyed by a U.S. air strike last night,” the statement said, after a morning call between both leaders. “President Assad alone bears the responsibility for this development. His repeated use of chemical weapons and his crimes against his own people demand sanctions which France and Germany already asked for in the summer of 2013 after the massacre at Ghouta.”

They added: “France and Germany, together with their partners and within the framework of the United Nations, will continue their efforts to hold President Assad responsible for his criminal deeds”.

“President Juncker has been unequivocal in his condemnation of the use of chemical weapons. The repeated use of such weapons must be answered… There is a clear distinction between air strikes on military targets and the use of chemical weapons against civilians,” the press statement said. “Efforts to stem the spiral of violence in Syria and work towards a lasting peace should be redoubled. Only a political transition can lead to such an outcome. President Juncker and the European Commission as a whole stand ready to play their part in full.”

China’s foreign ministry says it is opposed to the use of chemical weapons and urged for the situation in Syria to not deteriorate. “What is urgent now is to avoid further deterioration of the situation,” foreign ministry spokeswoman Hua Chunying told a press briefing. “We oppose use of chemical weapons by any country, organisation or individual in any circumstance, for any purpose.”

Prime Minister Malcolm Turnbull backed the air strike. “We can say that the Australian government strongly supports the swift and just response of the United States,” he said in a statement. “The affect of the American response has been to reduce the ability of the Syrian government to deliver chemical weapons in the shocking manner in which they did a few days ago.”

“This was a calibrated, proportionate and targeted response. It sends a strong message to the Assad regime, and as I said, has been struck at the very airfield from which the chemical attack was delivered” Turnbull said.

Bahrain’s Ministry of Foreign Affairs said in a statement that the strike was “needed to stop the bloodshed and prevent the proliferation or use of any banned weapons” against civilians. “The Ministry of Foreign Affairs further praises the contents of President Donald J Trump’s remarks, which reflects the United States determination and strong will to defeat terrorism in all its forms” the statement said. 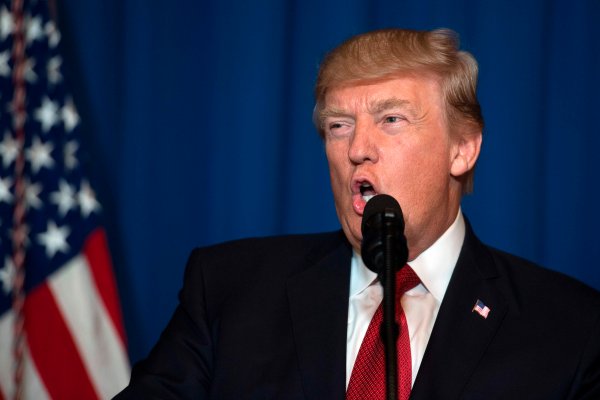 The Trump Administration Warned Russia About the U.S. Missile Attack on Syria
Next Up: Editor's Pick