U.S. Launches a Missile Attack at Syria in a Test of President Trump's 'America First' Policy

The inertia of institutional Washington tends to stretch out major decisions for days, weeks, even years. Yet in the span of 48 hours, the Trump Administration shrugged off those constraints, reversing its foreign policy and launching a fusillade of missiles at the regime of Syrian President Bashar Assad for once again turning chemical weapons on his own people.

In the predawn hours Friday morning, a rain of Tomahawk Land Attack Missiles fell on a Syrian airfield believed to be the source of Tuesday’s chemical-weapons attack. Two senior government officials said at least 50 of the missiles were launched from U.S. battleships. The Pentagon briefed reporters that it had tracked the aircraft involved in the chemical strike back to the base on radar.

Delivering remarks to the nation one hour after the strike, Trump said the strike was in the “vital national security interest” of the U.S. He said he ordered the strike on the airfield from which the chemical strike originated, and called on allies around the world to work to end atrocities in Syria.

“Tonight I call on all civilized nations to join us in seeking to end the slaughter and bloodshed in Syria, and also to end terrorism of all kinds and all types,” Trump said.

Earlier this week, at least 72 people, including many children, died in the town of Khan Sheikhoun and intelligence agencies blamed the Syrian regime. The World Health Organization said the victims’ symptoms were consistent with a nerve-agent exposure. Asked by reporters aboard Air Force One on Thursday whether Assad should no longer rule Syria, the President hinted at the potential for a forceful U.S. response. “I think what happened in Syria is a disgrace to humanity,” Trump said. “What Assad did is terrible. What happened in Syria is truly one of the egregious crimes and it shouldn’t have happened. And it shouldn’t be allowed to happen.” Hours later, on his orders, American missiles were screaming toward Syria.

The President has long distanced himself from Barack Obama’s insistence that Assad leave power in Syria. Last week in Turkey, Secretary of State Rex Tillerson said that Assad’s fate should be decided by the Syrian people. But on Thursday, Tillerson said there was “no doubt” that Assad was responsible for the deaths and that as a result, “it would seem that there would be no role for him to govern the Syrian people.”

Trump made clear to his advisers and the world Wednesday that he was not going to sit on the sidelines, saying the attack “crosses many, many lines.” Aides say the Syrian incident has shaken the new President in a deeply personal way. Trump told the New York Times he first learned of the strike on television Tuesday morning, but he received a more extensive — and graphic — briefing later by his national security team.

Two people who have spoken to Trump in recent days say he was disturbed by the images and kept returning to them in conversations. No longer were the victims of Assad merely children of a distant country. Some were the same age as his youngest, 10-year-old Barron. “I will tell you, it’s already happened that my attitude toward Syria and Assad has changed very much,” Trump said Wednesday in a rare moment of public self-examination. He made that statement standing next to the leader of Jordan, King Abdullah II, whose country has taken in more than 650,000 Syrian refugees.

For Trump, it’s the first test of his commitment to his nationalistic “America First” rhetoric, which prioritizes the needs of the American people over those in other countries. The outlook Trump championed on the campaign trail places little utility in humanitarian interventions, and restricts American intervention overseas. Trump has questioned the cornerstone alliances of American foreign policy, including the North Atlantic Treaty Organization and U.S. military cooperation with Saudi Arabia, Japan and South Korea. An intervention in Syria would add a major humanitarian caveat to his stated worldview.

Ahead of the strikes, there were some mixed messages coming from Trump’s orbit, suggesting rhetoric and actions were not yet gelled. On Wednesday, the U.S. ambassador to the U.N., Nikki Haley, warned an emergency Security Council session that if the U.S. may go it alone, possibly with another international coalition, if the U.N. doesn’t respond. To make her point, the mother of two held up photographs of Assad’s victims. “How many more children have to die before Russia cares?” she asked her diplomatic colleagues.

White House press secretary Sean Spicer said Trump is being presented “with a lot of options,” which officials said spanned the range of diplomatic to military responses and were the subject of discussion of a Wednesday National Security Council meeting. A follow-up session was slated for Thursday evening at Trump’s Florida estate. Defense Secretary James Mattis circulated to fellow members of Trump’s national security team proposals like firing cruise missiles into Syria from U.S. Navy ships. The retired four-star Marine brought with him decades of experience in such dicey conversations and lawmakers from both parties on Capitol Hill found comfort that Trump was taking advice from the respected tactician.

America is unmatched when it comes to its arsenal of powers. But there are limits to what the military alone can accomplish. Assad and his inner circle have had years to prepare for any American attack. Syria’s rudimentary antimissile shield may have stopped a few from the volley, and the targeted base has hardened shelters for the country’s attack aircraft. Authoritarian regimes seldom forget to game out threats, both foreign and domestic. After six years of warnings to knock off its oppressive tactics, the bunkers outside of Damascus are likely well fortified and prepared for the worst. A short blitz of Assad’s military headquarters alone won’t force him to end his family’s absolute rule, which dates back to 1971. And any civilian victims of a U.S. mission would undercut its moral claims.

Russia warned Thursday that that its support for Assad was “not unconditional,” though it has made similar threats in the past to no avail. A U.N. Security Council vote was slated for Wednesday, but was delayed to allow for negotiations with Russia, which has veto power on the council. Syria provides Russia its only deep-water port with a military foothold outside of Russia and the former Soviet states.

The American salvo into Syria complicates President Trump’s efforts to build a more constructive relationship with Russian President Vladimir Putin. At the same time, deference to Moscow could flame suspicions that Russian interference in the 2016 election has been rewarded with Trump in power at the White House. Faced with the choice, Trump decided to go with his gut — that attacking children could not be left unanswered — and that instinct has served him well for decades.

Left unanswered so far is a central question: What does Trump administration envision for Syria after Assad? He is a brutal leader who has consolidated power. But he is aligned with the West in a fight against Islamic extremism. This is one reason Russia, Iran and Saudi Arabia maintained support for Damascus. If Assad falls, it could create a power vacuum, further drawing the U.S. into an international conflict that Trump promised the American people he could quickly solve if elected. 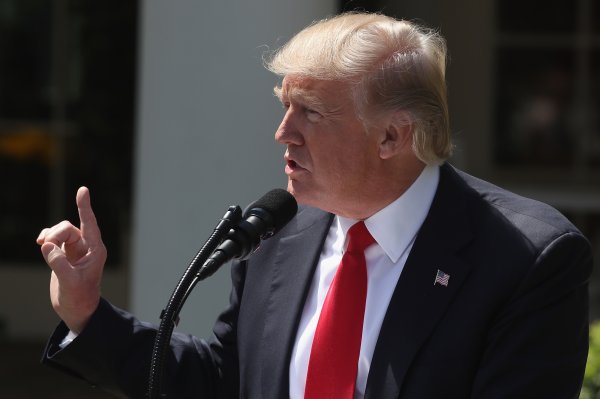 'Something Should Happen'
Next Up: Editor's Pick