For more than 15,000 students across the country, Wednesday marked the first day of Resistance School — a program where the educational focus is mobilizing against President Donald Trump’s administration.

“Each one of us has people in our lives who were disturbed by the outcome of the election and saw it as a call to action,” said Joe Breen, one of the Resistance School co-founders. He’s a third-year student in a joint degree program at Harvard Law School and the Harvard Kennedy School. “We recognized that we had the opportunity to help them develop the skills that they would need to get involved in political action.”

Resistance School organizers — a group of Harvard graduate students — said a couple hundred people participated in the first lesson in person at the Ivy League campus in Boston on Wednesday, while about 15,000 people of all ages tuned in via livestream from 50 states and 20 countries. They estimated the total participation was even larger because students were encouraged to host watch parties in groups.

The school — which is offering lessons on mobilizing activists and sustaining long-term resistance — has inspired comparisons to Dumbledore’s Army, the student group that united against Voldemort in the Harry Potter series. Breen said he is embracing the comparison as long as it means the school’s message is resonating with people. The group also reached out to Harry Potter author J.K. Rowling, a vocal Trump critic, to invite her to participate, but they haven’t heard back yet.

“It feels like the start of something quite significant,” said Harvard Kennedy School lecturer Tim McCarthy, who describes himself as both a Resistance School student and teacher. “I told the students last night that I haven’t felt this kind of energy on campus in a while.”

McCarthy taught Wednesday’s lesson on communicating effectively for change. He said he was “absolutely thrilled” to see the Resistance School emerge from “deep despair over the U.S. presidential election.”

“I was also relieved to know that there are people in this generation coming up who refuse to get stuck in the pit of despair,” he said. “They refuse to be paralyzed by the monumental train wreck that I mentioned in my speech.”

Resistance School leaders said they hope their lessons will give people the tools to continue the momentum of recent anti-Trump protests like the post-inauguration Women’s March on Washington.

“Universities have played a really critical role throughout history in progressive mobilizing and organizing,” said Yasmin Radjy, one of the Resistance School co-founders and a second-year student in the Harvard Kennedy School. “Even with folks who may not be progressive here, there’s been a lot of enthusiasm and excitement about students actually doing something together that has an impact on the world beyond the walls of our institution.” 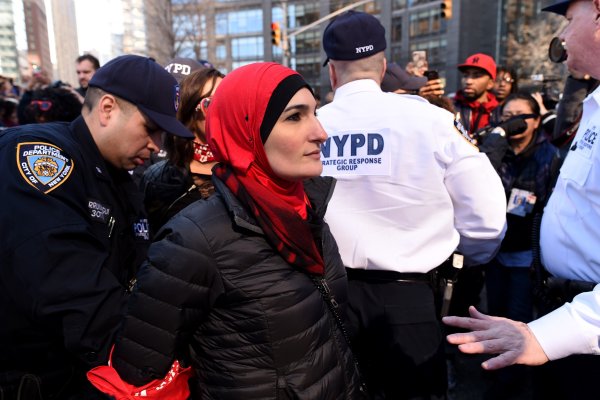