MTV Got Rid of Gender Divisions at an Award Show. It’s Time for Others to Do the Same

MTV is doing some spring cleaning this year: The MTV Movie and TV Awards, which air live on May 7, are eliminating separate categories for Male and Female Performance, opting instead for gender-agnostic awards. It’s the second notable change to the show, following last month’s announcement that this year would be the first to recognize television alongside film.

Putting performers of different genders in competition with one another is not entirely new for the show. The Best Performance category has been combined twice before, in 2006 and 2007, and the show has long featured awards that don’t differentiate between genders, from Best Hero and Best Villain to Best Comedic Performance.

But the change reintroduces a question that has been periodically asked of other, more prestigious (and arguably less progressive) awards shows: why continue to segregate genders when recognizing achievements in the arts? Separate categories for men and women strike many observers as sexist—this is acting we’re talking about, and there’s no reason (at least, none that doesn’t reek of gender essentialism) why gender might influence a performer’s ability. But there’s another reason why the division is outdated: not all people identify as male or female.

Just yesterday, Variety spoke with Asia Kate Dillon, who stars in the second season of the Showtime series Billions and who identifies as gender-nonconforming. Dillon, who uses the pronouns “they” and “them,” has been generating buzz for their performance as a finance genius working alongside Damian Lewis’ hedge fund manager in the show. But when Showtime asked Dillon what category they’d like to be submitted under for Emmy consideration—supporting actor or supporting actress—the answer wasn’t a simple one.

Dillon wrote a letter to the Television Academy, hoping to start a conversation about a binary system that, as they write, leaves “no room for my identity.” The Academy responded quickly, telling Dillon that anyone can submit under either category, and the Academy will not police those decisions. The response satisfied Dillon as a positive and productive start to what will surely be an ongoing discussion. It still leaves them, however, without an option that fully acknowledges their identity.

The answer to both Dillon’s situation and allegations of sexism would seem to be a simple one: abolish binary awards categories, as MTV has done. But some say bifurcated categories are a necessary evil in an industry that continues to be dominated by men. Remove specifically female categories, the argument goes, and say goodbye to women winning anywhere near the number of awards they do under the current system. At least with their own category, they are guaranteed recognition. The MTV Movie Awards, in fact, offers data to support this case: Since the inception of Best Comedic Performance in 1992, the award has gone to a woman only three times. And both times the show combined Best Performance into a single category, the awards went to men.

But this line of thinking is problematic—it’s an attempt to remedy a much deeper issue of systemic exclusion by extending the status quo. Moreover, though, women aren’t the only underrepresented group in Hollywood who merit greater recognition. This year’s Oscars may have set records for inclusion, but by every measure, people who are not white, male, straight, cisgender or able-bodied have fewer opportunities to make the kinds of movies and play the kinds of roles that get awarded with golden statues. Is segregation really the best way we can think of to ensure that awards shows recognize everyone?

The proposed collapsing of acting categories also raises a concern that it will result in fewer trophies altogether in an awards landscape that already lacks enough bling to go around. But there are other ways to spread the love. MTV’s inclusion of TV shows, in addition to acknowledging that the medium has for years now been much more than the movies’ goofy little sibling, means more awards going to more performers. The Academy Awards could make like the Golden Globes and break out acting awards by genre. Or take the Emmys, where the number of storytelling formats—limited series, TV movie, variety talk series and so on—means that statues are doled out across half a dozen different acting categories.

It’s no surprise to see MTV, a network that has long promoted social engagement and activism among its young viewers, at the forefront of these changes. This year’s show also moves in step with the times with the addition of several new categories. Best American Story, whose nominees include Black-ish and Transparent, will be “awarded to the show or film that shows America at its best, open and diverse.” And the category formerly known as Best Fight has morphed into Best Fight Against the System. With nominees like Get Out and Luke Cage, it will be “awarded to the film or show whose characters best exemplify fighting against a system that tries to keep them down.”

Ultimately, the wheels for inclusion in Hollywood must be set in motion long before awards chatter begins. A movie or show must be made, a performance performed, before it can be acknowledged with that coveted golden popcorn. But awards—even from a show that once gave one out for Best Sandwich in a Movie—translate into visibility and validation that can propel a career and inspire young viewers to pursue their own creative ambitions. As more serious-minded awards-disseminating organizations continue to work toward a more inclusive future, they could stand to take a hint from MTV. 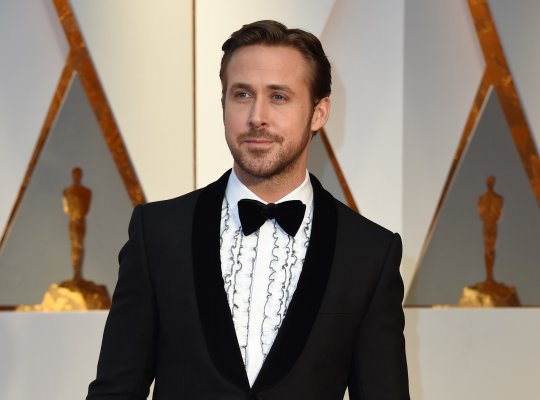 Here's the Real Reason Why Ryan Gosling Couldn't Stop Laughing During the Oscars Mix-Up
Next Up: Editor's Pick