What to Know About Sarin, the Deadly Nerve Gas Likely Used in Syria

Mounting evidence is pointing towards the nerve gas sarin as the chemical behind the attack that killed more than 80 people, including at least 27 children, in Syria’s Idlib province earlier this week.

Early assessments by U.S. intelligence officials, Doctors Without Borders and the U.N. health agency suggested that chlorine gas and traces of sarin were used in the bombing, which President Donald Trump called an “affront to humanity.” On Thursday night, the U.S. military launched more than 50 cruise missiles at a Syrian air base in response to the chemical attack.

Abdel Hay Tennari, a doctor working in an Idlib hospital, told TIME that he was sure the attack was the result of sarin or a highly similar gas. On the day of the bombing, his hospital treated 22 patients, who showed clear signs of being affected by a nerve agent and “responded almost immediately” when they were provided with Pralidoxime, a sarin antidote. But what exactly is sarin, and why is it so dangerous?

Sarin, also known as GB, is clear, colorless, tasteless and has no odor in its pure form. It is described as “a human-made chemical warfare agent classified as a nerve agent,” by the Centers for Disease Control and Prevention(CDC). It is generally a liquid, however it can evaporate into a gas and spread into the environment, according to the CDC.

What are the symptoms of sarin exposure?

Because sarin is odorless and tasteless, it’s difficult for people to know when they’ve been exposed to it. Symptoms may include a runny nose, eye pain, drooling, excessive sweating, rapid breathing, coughing, increased urination and nausea, according to the CDC. More extreme exposure may lead to a loss of consciousness, paralysis, convulsions and respiratory failure, all of which could result in death.

Pralidoxime and Atropine work as antidotes for sarin. But Dr. Tennari said following Tuesday’s attack, the hospital was only able to secure a limited number of doses of Pralidoxime due to its high cost and the difficulty of obtaining it. Atropine, which is far cheaper, can be used to counter moderate cases of sarin poisoning.

When was sarin first produced?

Sarin, along with the nerve agents tabun and soman, was first produced by chemist Gerhard Schrader and his team in Germany in the late 1930s. The name is an acronym of the four scientists who created it: Gerhard Schrader, Otto Ambros, Gerhard Ritter, and Hans-Jürgen von der Linde.

The group actually created the potent substance by accident while working on a pest control project. Dr. Schrader was effectively rendered blind by the development and lost most of his muscular coordination, as did his assistants. Adolf Hitler was said to be interested in using sarin as a weapon against the allied forces during World War Two, but never did, according to the American Chemical Society.

Has sarin been used as a chemical weapon before?

Yes. In 2013, a team of U.N. chemical weapons inspectors confirmed that sarin had been used in an attack that killed as many as 1,400 men, women and children in Ghouta, a suburb on the outskirts of Damascus, Syria. The Syrian government denied responsibility for the attack, as they did for the most recent incident. That 2013 attack was the most lethal use of chemicals in global warfare since the 1988 Halabja massacre, where Iraqi forces led by dictator Saddam Hussein killed thousands of their own civilians by using the gas.

Sarin was also used in the 1995 Tokyo subway attack by Shoko Asahara’s cult, which killed 12 and sickened thousands. Members of the cult used the tips of their umbrellas to puncture plastic bags filled with liquid sarin on five crowded subway cars before hurrying off — leaving their fellow riders trapped with the toxic gas.

Does the Syrian government have sarin stockpiles?

Following the 2013 Damascus attack, Syria joined the international Chemical Weapons Convention under a U.S.-Russian deal and agreed to hand over its stockpile of about 2.8 million pounds of toxic weapons as well as disable its chemical weapons program.

In 2014, Syria handed over the remaining 220,462 metric tons of toxic material it had reported to the Organisation for the Prohibition of Chemical Weapons (OPCW), which was set to be destroyed at sea. However, OPCW chief Ahmet Uzumcu told Reuters at the time that he could not confirm that that was the last of Syria’s chemical weapons. “All declared chemical weapons have left Syria (but) clearly we cannot say as the secretariat of the OPCW that Syria doesn’t possess any chemical weapons any more,” he said.

The Trump administration blamed Syrian President Bashar al-Assad for the most recent chemical attack, an accusation the government has categorically denied responsibility for, as it did with the bombing in 2013. 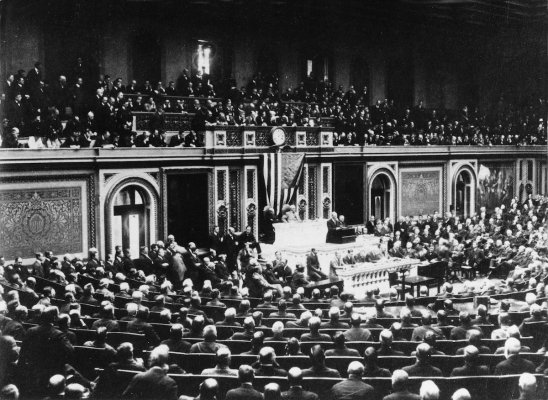 Read President Wilson's 1917 Address on the U.S. Entering World War I
Next Up: Editor's Pick