11 Life-Changing Trips to Take in Your 30s

Your 30s are a magical time. You’re a fully formed adult, with all the responsibility that adulthood entails, but you might also have disposable income to spend. Thirty-year-olds “are not looking to save money necessarily, they’re looking to spend it quickly,” says Andrea Malis, a travel advisor with Comeback Odyssey Travel in Tuscon, Arizona, of her millennial clients. And since so many are pressed for time, it isn’t uncommon for these travelers to pack as much as they can into a fairly short time frame. “In four days, they’ll do what a retiree would take three weeks to do,” Malis says.

With help from a handful of seasoned travel experts, we chose the best trips to take in your 30s, whether you’re looking to sample fine Malbec, hike Machu Picchu, or clock in some spa time. Each offers rich opportunities for seeing the world—and yourself—from a wholly new vantage point.

“You have the wine region, but then you have the active component—hiking and biking,” Comeback Odyssey Travel’s Malis says of Argentina’s attractions. Lisa Lindblad, owner of Lisa Lindblad Travel Design in New York City, agrees the geographically diverse country is “very outdoorsy” with its snow-capped mountains and dreamy coastlines. From the café culture of Buenos Aires to Patagonia’s rainforests and Mendoza’s mouth-watering parillas, Argentina travel offers a little something for everyone—especially food-loving millennials with a fondness for nature.

“Belize is really popular, even just for four nights,” says Lynda Turley of Alpine Travel in Saratoga, California. That’s especially true among newlyweds, who want “to stay somewhere close to the U.S. but want to get away for a last hurrah before they’re a bit more tied down.” She recommends “staying part of the time at the beach for excellent snorkeling and diving, and then part of the time in the rainforest for the culture and nightlife.” The beach at Turtle Inn, part of the Coppola family of resorts, is a favorite thanks to its plethora of water activities, including zip lining.

“You’ve got your chance to see the Northern Lights in winter; in summer, you’ve got endless days,” Lindblad says. Best of all, the country is highly accessible, making it ideal for time-crunched travelers. “It sits so close to the East Coast, you can go on your way to England. Or for a long weekend, spend two or three days there, and then carry on or come home,” she says. Though no one really stays in Reykjavik, Lindblad says Hotel Rangá is an attractive option. There are many well-positioned lodges, since, after all, “logistics is everything in Iceland.”

For foodies and hikers alike, Marjorie Shaw, founder of Insider’s Italy, based in Rome, recommends the stunning Amalfi coast and Trentino-Alto Adige in the far north. Amalfi is best in winter, when it’s low season, but if you insist on going in summer, you’ll be rewarded with hikes and “excursions to Greek temples and villas destroyed by Mt. Vesuvius,” she says. Late spring to early autumn is best for Trentino-Alto Adige, as it borders Austria and Switzerland and offers an enticing array of cultures. In the largely German Alto Adige, Shaw says, you’ll find “small Latin communities scattered throughout.”

“Japan is everybody’s passion these days, particularly among 30-somethings,” says Lindblad. “It’s expensive, but if they have disposable income, there is really something for everybody: food, design, clothes and architecture.” Malis agrees: “Japan has a booming culinary scene beyond sushi and teppanyaki, which should not be missed. Add a fish market, whiskey or sake tour, and your trip would be amazing.” Health nuts will flock to Kyoto’s ryokans, Lindblad says, especially Beniya Mukayu in artsy Kanazawa, while rookies will appreciate the ease of the country’s transportation system.

“New Zealand is huge with the 30-year-old market and adventure market,” says Turley of Alpine Travel. The locally grown food is almost fully sustainable—think fresh water salmon, green-lipped mussels, cheeses, and pit fruit—and the wine is superb. “Wellington is a super-fun college town and great jumping-off point for seeing The Lord of the Rings filming locations,” Turley says, while visiting Waiheke Island “is like going to Tiburon or Sausalito for the day in California.” Just a two-hour ferry from Auckland, Waiheke is perfect for day trips to wineries like Miro Vineyard or overnight stays at one of the many cute boutique hotels.

“Peru is a really achievable destination for somebody in their 30s,” Malis says, because the airfare is reasonable. There’s the allure of fulfilling a bucket list item (the ancient Incan city of Machu Picchu), and since millennials like to be rewarded for their efforts, they can chow down post-hike at one of the fancy Relais & Chateaux properties. Speaking of hiking, it doesn’t get much better than the historic Plaza de Armas in Cusco, Sacsayhuamán, the “Stonehenge of the Andes,” or the mother of all Inca trails, Machu Picchu.

“Portugal is a great value, especially with the dollar being so strong,” says Turley, who’s worked with many clients in their 30s. “It’s half the price of Spain to start out with,” and it fits the millennial bill thanks to its serious wine culture. “If they’re not spending a lot of money in Lisbon, they can blow a little in the Duoro Valley in the north,” the world’s first designated wine region, Lindblad says. Dropping a few euros on Six Senses, a luxurious 19th-century manor house overlooking the vine-covered hills, isn’t a bad idea either.

Going back to the idea of accomplishing a lot in a short time frame, Malis says “South Africa is an amazing place for people to go visit,” as “you have the ocean experience, where you can shark dive” and the ability to enjoy a couple of nights in the Cape Winelands, the country’s mountainous answer to Napa Valley. For history buffs, Johannesburg offers themed walking tours to unlock the city’s history and get a bit closer to Nelson Mandela, while the recent opening of Four Seasons Westcliff will suit a luxury-minded crowd in need of a spa treatment after a safari.

For those in search of tropical climates free from the threat of Zika, the largest island in French Polynesia is a wonderful option, Turley says. Of course, whether you go will depend on your budget since airfare doesn’t come cheap. If you can swing it, Turley highly recommends The Brando resort, an eco-friendly oasis tucked 45 minutes away on the private island of Tetiaroa. “It used to belong to Marlon Brando, and it’s been opened as a resort,” she explains. “And again, it’s got everything: excellent food and wine, all included; all your wellness is there.”

South America’s buzzy hotspot is super accessible, Lindblad says, especially for those coming east from Buenos Aires. From there, a roughly four-hour ferry-and-bus ride gets you to Montevideo, where you can enjoy a relaxing stroll on the white-sand beaches; visit Ciudad Vija, the city’s oldest neighborhood; or hit one of the many bars and nightclubs, where tango performances are a lively tradition. Montevideo is best in October, when the temperatures ease up and average rainfall takes a nosedive. But perhaps the most alluring aspect, Lindblad says, is that you won’t need a tour guide. 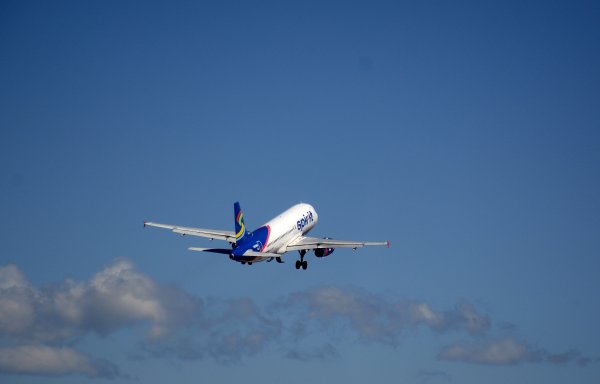 These Airlines Have the Worst Customer Service
Next Up: Editor's Pick