President Woodrow Wilson asks Congress to send U.S. troops into battle against Germany in World War I, in his address to Congress in Washington D.C. on April 2, 1917.
The Stanley Weston Archive—Getty Images
Ideas
By Ian Bremmer
Bremmer is a foreign affairs columnist and editor-at-large at TIME. He is the president of Eurasia Group, a political-risk consultancy, and GZERO Media, a company dedicated to providing intelligent and engaging coverage of international affairs. He teaches applied geopolitics at Columbia University’s School of International and Public Affairs and his most recent book is Us vs. Them: The Failure of Globalism.

When historians remind us that the first World War was once known as “the great war” or “the war to end all wars,” they usually do it with an ironic nod toward the carnage to come a generation later. Yet, World War I remains the conflict that opened the modern age. It brought down the Ottoman and Russian Empires and speeded the decline of Britain’s global empire, as well. Its aftermath opened the debates and drew the borders that continue to incite violence to this day. It brought the first failed attempt at an international architecture to promote peace and democracy. And it brought the United States of America onto the largest stage. Teddy Roosevelt gave the U.S. its earliest imperial ambitions in the first decade of the new century, but it was Woodrow Wilson’s decision in 1917 to move the U.S. into its first European war that made the U.S. a crucial, if reluctant, international power.

In the years that followed, Wilson’s health failed him, and the unpopularity, in Congress and across much of the country, of U.S. participation in the post-war League of Nations forced those who favored U.S. international leadership into retreat. The wounds inflicted by the U.S’s (relatively limited) exposure to war—and the influenza pandemic brought home by returning troops that killed an estimated 675,000 Americans, ten times the number that died on the battle field—helped poison the debate. It took another world war to persuade most Americans that U.S. leadership was essential for a just and peaceful world—and that a just and peaceful world was necessary for U.S. national security and prosperity.

The historical moment that opened with U.S. entry into World War I has now closed, just in the past few months. Donald Trump is the first president in 80 years who does not accept the premise that U.S. international leadership is in the U.S. national interest. Why must the U.S. play such a large role in safeguarding Europe’s security? Why do just five of NATO’s 28 members spend the required 2 percent of GDP on defense? Why must the United States accept responsibility for the security of wealthy countries like Germany and France and of faraway nations like Albania, Estonia, and Slovenia? A century on from World War I and more than seven decades from World War II, isn’t Europe now rich enough to fight its own battles, he asks?

There are thoughtful answers to these questions, but the president speaks to the resentments and anxieties of millions of Americans who feel that others continue to freeride on American generosity. The U.S. will not retreat into the isolationism of an earlier era; the interconnected world we live in makes that impossible. But Trump’s foreign policy innovation is to call into question the notion, first articulated by Wilson, that the U.S. is indispensable for the promotion of peace and justice in the world, and that a world made safe for democracy will bolster America’s security and strength.

Our problems, of course, are not that simple. As we mark this important anniversary on April 6, we must recognize that competition among rising powers is back on the world’s agenda. What better time to look back, to remember, to weigh the costs of adventurism—and the risks that develop when the world lacks forceful leadership. 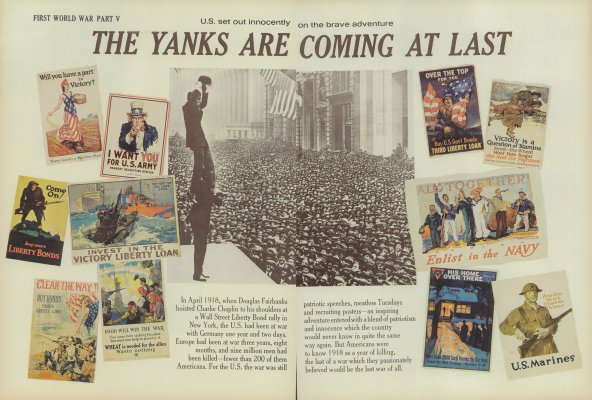 Remembering the First World War in Images
Next Up: Editor's Pick