The World May Little Note, but Kansas City Still Remembers

They were hoping to get the President. He would attract Prime Ministers and live TV coverage and all the signifiers of an Important Commemoration. But as the day approached, the White House schedule called for the Commander in Chief to spend April 6, 2017, in the company of the Chinese President at Mar-a-Lago.

So it appeared that the 100th anniversary of America’s entry into World War I would be a bigger deal in Kansas City than elsewhere. This felt familiar. The transformative and tragic war was the harbinger of modern America, which reluctantly emerged as a world power amid the death throes of Old Europe. Yet for complicated reasons, it isn’t lodged in the nation’s memory. The battles of Gettysburg and Normandy are retold generation by generation, while the Battle of the Argonne Forest–where more than 26,000 Americans gave their lives in the autumn of 1918–is gone like a nightmare that vanishes with the dawn.

But the overlooked war looms large over Kansas City, Mo., which is why the official commemoration was held here, rather than in Washington. This is the place where, in 1919, a patriotic community, swept up in the conviction that something important had happened amid the unspeakable carnage, raised $2.5 million (roughly $35 million today) in just two weeks to build a monument.

It would make a fitting venue for a gathering of heads of state. Rising to 217 ft., the Liberty Memorial tower commands a solemn plaza flanked on one side by a Memory Hall dedicated to 441 area residents who died in the war and by a small exhibition hall on the other.

At the dedication of the site in 1921, the most famous Missourian in the world–General John J. Pershing, commander of the American Expeditionary Forces in the Great War–was joined by his brother commanders from France, Great Britain, Italy and Belgium. But it was a lesser officer in the war, Captain Harry S. Truman, who captured the civic spirit that infused the construction project. Truman, a clothing-store owner who would become President, served as decorations vice chairman for the great event. It would, he predicted, make Kansas City “the most talked-about town in the world.”

Ferdinand Foch, the French Marshal, declared that he had never seen such patriotism. In a city of roughly 325,000 people, more than 100,000 attended the dedication. Many of them would have recalled that the first American officer killed in action had been a local doctor, Captain William T. Fitzsimons. Another local man, Major Mark Hanna, was one of the last to die.

It was an era of great energy in this young American boomtown. The feedlots and meatpackers of the Missouri River bottoms fed the nation with steaks and bacon. Prohibition was just a bad rumor in the city’s nightclubs, which pulsed with jazz and sex. A young ambulance driver home from France, Walt Disney, was surely in that crowd. Not yet 20 but matured by the war, he was starting a business making animated cartoons. His Kansas City studio didn’t last, but the mouse he befriended here was destined for immortality.

In short, everything was up to date in the so-called Paris of the Plains. The soaring memorial would be a boldly visible expression of its ambitions. How could they know that the war they endured, which cost more than 100,000 American lives and left Europe decimated, was but a wretched overture to an even more horrible one? Nor could they imagine that their decorations vice chairman would build an American-led order strong enough to assure the longest reign of peace among great powers since the Roman Empire.

The future has an urgency that drowns out the past. Over time the Liberty Memorial fell into disrepair. But Kansas City never gave up on it. In 1998, citizens voted to tax themselves for maintenance, and six years later they passed a bond issue to build an award-winning museum and research center beneath the memorial. In time, Congress granted an official designation: the National World War I Museum and Memorial. There are plans, finally, to build a memorial in the nation’s capital too. That’s a fitting and proper thing to do.

The fact won’t change, however, that the first, and the grandest, memorial still stands in the heart of America. The President should see it sometime. 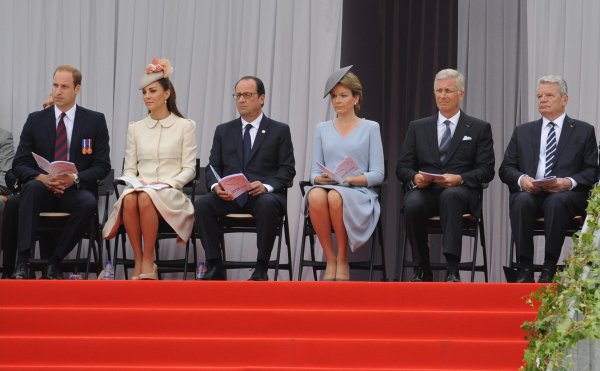 World Leaders Gather in Liege For WWI Centenary
Next Up: Editor's Pick