China's Trump Impersonator Has Nothing But Love for the U.S. President

Some people have their destiny mapped out from a young age. Others find their true calling late in life. For Li Liangwei, fortune came knocking during a boozy dinner when he was 64. “I was kind of upset, so I put down my glass and rose abruptly, and with a sweep of my hand announced, ‘I have the say here!’ Upon that, one of my friends said, ‘You look like Mr. Trump, President of America.’ I had no idea who that was.”

Still, that epiphany transformed Li’s life, catapulting him from the retired editor of an arts magazine in southern China’s Hunan province to his nation’s leading impressionist of the U.S. Commander in Chief. Today, Li receives several hundred dollars a gig to drum up crowds at commercial events, touting products or simply waving through the sunroof of a Porsche dragged by a man using his teeth. “People always say I resemble Trump not just in appearance, but far more important, in temperament and spirit,” says Li. “The temperament and character quality of a great man are not built in a day.”

Of course, Li faces more empirical obstacles in his quest to emulate the “great man,” such as his jet-black hair and dark eyes. To keep his dream alive, he enlisted the help of star entertainment agent Zou Danrong, who knows a thing or two about the impersonator game. Zou already has a Kim Jong Un and two Barack Obama impersonators on his books, and jumped at the chance to expand his portfolio to include the 45th U.S. President.

“The color of their hair is different, so I ask the stylist to change Li’s black hair into grey white,” says Zou. “But still their eyes are different so I use colored contact lenses. With the same suit, they look very much alike.”

But another transformation was afoot. Before that revelatory dinner, Li led a quiet life of study and meditation. His greatest passions were Cantonese martial arts and revolutionary songs exalting modern China’s founder Mao Zedong. “I barely go out unless for some important affairs,” he says. “So I know little about politics.” But the more he learned about Trump, the greater his admiration grew. “The more I know about Mr. Trump, the more respectable I think he is,” says Li. “While the majority of elderly in China retire at home upon reaching their 60s … Mr. Trump is still working hard and rushing about for his people and nation.”

The U.S. President has been sparing with reciprocal compliments about China, though, accusing its export-driven economy of stealing American jobs, and vowing to label Beijing a currency manipulator and slap a 45% tariff on imports. On Thursday, Chinese President Xi Jinping travels to Trump’s Florida resort of Mar-a-Lago for two days of crunch talks. But Li is optimistic that bilateral relations between the world’s two largest economies will stay rosy. “We should not judge a man from his temporary behavior, but his whole life,” he says. “Trump is actually an outstanding person.”

— With video and reporting by Zhang Chi / Yueyang, China 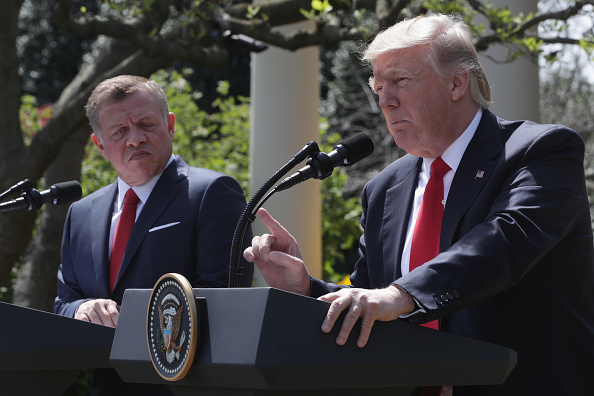