What Marijuana Legalization in Canada Could Mean for the United States

America’s neighbor to the north is fast moving toward legalizing recreational marijuana nationwide, which would make Canada the second country in the world to do so. And the impact of having weed legalized on such a big scale, so close to home, may affect the future of pot in the United States.

“There are those who sometimes regard Canada as the 51st state. It would be an important signal about the movement coming of age. It would add to the critical mass,” says Oregon Rep. Earl Blumenauer, a member of Congress’ newly-formed Cannabis Caucus who is pushing to change the way the federal government treats the substance. And, he says: “It would shift the center of gravity.”

When Colorado voters legalized marijuana in 2012, it became the first jurisdiction in the world to regulate and tax pot like alcohol. By the time Election Day was over in 2016, eight states had legalized pot for adult use, covering a population more than double the size of Canada’s. (Nearly 30 states have comprehensive medical marijuana laws.) Uruguay became the first nation to legalize marijuana several years ago but has been sluggish in setting up a market. That means that while American states have been blazing the trail, Canada will likely be taking the baton.

Some see that as a “missed opportunity,” as Sam Kamin, a marijuana law expert at the University of Denver, puts it. Prime Minister Justin Trudeau’s liberal government plans to announce legislation around April 10. And Kamin believes that the model set to be announced — wherein the national government sets big-picture standards but important factors like how to distribute and sell the product are left to the provinces — “would have and could work here in the U.S. But we see them passing us in that regard.”

In Kamin’s view, the upsides America is missing out on include eliminating the costs, financial and personal, of jailing people for selling and possessing pot; driving out the black market through competition; and giving people transparency about what they’re buying. But going first could also give Canada a leg up when it comes to the business of pot, drawing capital-flush investors who have been wary to spend their money in the U.S. so long as the federal government views marijuana as a drug on the same legal footing as heroin.

Some Canadian companies are already investing in the U.S. marijuana market and looking to license products that have become popular here, says Troy Dayton, CEO of Arcview Group, which runs a network of investors and publishes an annual report on the size of the legal marijuana industry. Assuming legalization comes to pass, “it’s the Canadian companies that have the best shot of building the biggest portfolios of U.S. companies,” he says. He also believes that Canada will be in a good position to set up a lucrative export business, as populous countries like Germany have legalized medical marijuana as a nation and others consider relaxing their laws.

According to Arcview, North Americans spent $6.7 billion on legal pot in 2016, up more than 30% from the year before. And if recreational markets come online as planned in places like Canada, California and Massachusetts, that could more than triple in the next five years, according to the company’s estimates. Canada moving forward “will create some market pressure for the U.S. to step up” in areas like innovation and investment as well as policy, says John Hudak, a marijuana policy expert at the Brookings Institution.

There may also be costs to going first, as Colorado knows well. The lessons that Canada will likely learn while setting up the market — like how and when it matters when rules vary among provinces that share borders — will be ones that the United States can learn from, just as states like Oregon and Washington have had the benefit of learning from Colorado’s growing pains on issues like edibles. Canada’s own recreational marijuana task force consulted with Washington and Colorado to prepare for legalization.

“There’s all of these ways that the U.S. market is nascent and clunky and inefficient,” says Arcview’s Dayton. “It’s an opportunity to see an efficient market.” Canada may also, for example, work through how to deal with treaties that contain “international commitments to suppress marijuana.”

Whatever happens in Canada is more likely to affect conversations about how to deal with marijuana in the U.S. than happenings in countries farther away, experts say. Canada is “a country the U.S. tends to trust, tends to see as a peer, tends to see as similar,” says Brookings’ Hudak, whereas politicians would be more likely to write off action in a place like Uruguay as “some odd Latin American policy experiment.” And if legalization takes hold without the sky falling, as it has in U.S. states, lawmakers pushing for reform on the federal level will “definitely hold it up as a model and something that informs the policy conversations,” he adds.

But it’s unlikely to tip any scales in terms of major reform. Blumenauer and fellow members of the Cannabis Caucus recently introduced a robust package of marijuana-related legislation, ranging from an ambitious bill that would regulate marijuana like alcohol on a federal level to measures aimed at making it easier for veterans to access medical marijuana through the Department of Veteran Affairs.

Despite the mixed messages that President Donald Trump and Attorney General Jeff Sessions have sent on marijuana, some suggesting that the federal government may step up enforcement, Blumenauer says he’s optimistic that they’ll get traction in three areas: changing a 1980s-era tax provision that seriously hampers legal marijuana businesses; securing banking services for an industry that is forced to perilously operate in cash; and easing restrictions on marijuana-related research.

Legalization in Canada “would be helpful” in pushing for reform, Blumenauer says, “but only incidentally so.” He says that what is happening on the ground in America is much more profound — how big the congressional delegation now is representing states where marijuana is legal, the fact that Americans now support legalizing marijuana at historically high rates, the stories of families who have uprooted their lives to move to places where they can access marijuana-as-medicine for children with seizure disorders or for retired soldiers with PTSD.

“If a nation like Canada approves it, sets up a regimen, provides a living laboratory of people right across the border that are a lot like us, it might help change the perceptions of some skeptics,” says the Oregon congressman. “But what is most compelling is the experience people have in their own lives and families.” 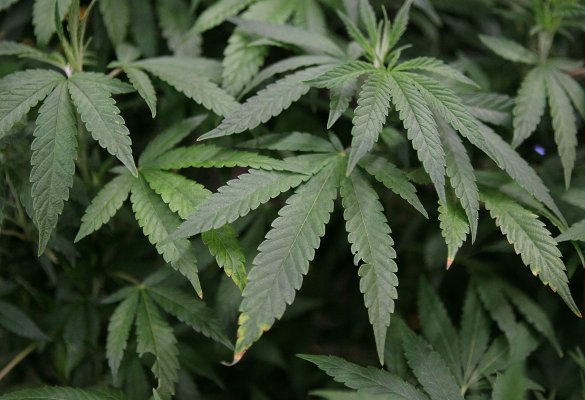 Oregon's Marijuana Industry Sold 11,000 Lbs. of Pot in 3 Months
Next Up: Editor's Pick