There’s a film just opened that, on its surface, seems like a period piece from a time long ago, about a genocide that we, as a species, pledged that we would “never again” tolerate. “Never Again” is, after all, written right there on a wall of the remnants of the Dachau concentration camp, in many languages. The Zookeeper’s Wife, starring Jessica Chastain, bears an eerie resemblance to world events today. The characters are different. The era, locations, and ethnicities are different. But the primeval terror remains. And once again, the world is too slow to act.

Jessica portrays Antonina Żabińska, the real-life Warsaw Zookeeper who, along with her husband Dr. Jan Żabiński, hid Jewish men, women, and children from the brutality of the Nazis. She is a reminder that in that even in the face of the most vile inhuman violence there are those committed to acts of common decency, whether they manage a zoo or a Rwandan hotel. Antonina’s actions, like mine in the 1990s, were not heroic but simply the right thing to do. One of the things I appreciated most about The Zookeeper’s Wife is that it underscores the complications of living under a brutal regime. Strikingly, like my experience in Rwanda, the film reveals how Nazism slowly but steadily came to be.

In 1930s Germany, it began with slurs toward the Jewish people against the backdrop of a nation still reeling from World War I. A complacent nation fell in line and donned the Swastikas, some out of hate but most out of fear. In Rwanda, it began with slurs toward the Tutsis and calls for them to go back to Ethiopia. It spread from there into a genocide that claimed the lives of nearly a million people. Many in the West still to this day do not realize the full implications of this mass slaughter. It is often written off as two primitive peoples engaging in barbarism, which is simplistic and frankly, wrong.

As I wrote in my book, An Ordinary Man, “Stripping the humanity from an entire group of people takes time. It is an attitude that requires cultivation, a series of small steps, daily tending.” That “daily tending” is often more frightening than the murders themselves. We see it play out in everyday lives. It happened to me. It happened to Antonina. Instincts for self-preservation, abject fear, and simple exhaustion are at war with doing what you know is right. Bizarrely, you bear witness to the mundane moments of life, where the softness inside men drives them to enjoy a meal, drink a beer, listen to music, hug their children and make love to their wives, before coldly taking a machete or a rifle to their neighbor. In The Zookeeper’s Wife, you see how Antonina learns quickly to operate (and even compromise her moral code) within these soft moments in an attempt to protect the life of someone she hardly knows.

We are born with a powerful herd instinct that can force otherwise rational people to do irrational things. It is hard to care for someone or something outside of our small circle. And even those who purport to care are often left feeling helpless. It’s why films like The Zookeeper’s Wife or Hotel Rwanda can powerfully influence — seeing Antonina’s story in the darkness of a movie theater for two hours without distraction stirs the heart in a profound way. We hope our internal barometer moves to the side of compassion. We believe we are bound by the same sense of purpose as the film’s hero or heroine, who in reality is as ordinary as we are. We secretly ask ourselves: would I do what Jessica Chastain’s character did, or would I fall victim to fear? Would I stay in line or break from the pack? Unfortunately, these are not just hypothetical or rhetorical questions. They are real. We are living with the world’s largest refugee crisis since World War II, with five million registered refugees fleeing the tyranny of the Syrian government. And in Rwanda, Somalia, South Sudan, Nigeria, and parts of Yemen, drought and famine have been escalated by government corruption. Twenty million lives are endangered. It adds up to the largest humanitarian crisis in history.

On the surface, these tragic world events can all be viewed as separate, unrelated, and far away from the comforts of Western reality. We see news reports, have fleeting moments of sadness, maybe even write a social post on behalf of an aid organization, but ultimately go on with our day. My fear is that common decency is losing a war to indifference, apathy, and selfishness. There seem to be far fewer Antonina and Jan Żabińskis in the world. I hope I’m wrong, but the fate of the humankind looks bleak from where I’m sitting – and I was the hotel manager in the center of hell on earth.

Time and again, we’ve seen the devastating impact of when refugees are turned away. In 1939, approximately 900 refugees boarded a German ocean liner, the MS St. Louis, in the hopes of being welcomed by Cuba, the U.S. or Canada. They were turned away, and almost a third of them died in concentration camps. If Belgium had not opened its arms to me and my family in 1996, I would have been a dead man. There were certainly enough threats on my life. So it is imperative that all governments do whatever possible to embrace the Syrian refugees— now. To quote the last line of Hotel Rwanda, “there’s always enough room.”

Indifference is not owned by one man, one leader, or one country. If only it were that easy. It is our collective problem. The thread of malevolent governance runs from 1940s Germany to 1990s Rwanda (and continues today) to present-day Syria, and in many other places throughout the world. We, the fortunate ones, must find within us the courage to resist the herd and tap into the quiet strength of kindness to do whatever we can to push our leaders to act before the “daily tending” makes its way across the oceans. Apathy and conformity are a greater, more frightening threat than that of any terrorist organization – that I can promise you.

As I wrote in 2006, in an attempt to contextualize the Rwandan genocide: “Unless the world community can stop finding ways to dither in the face of monstrous threats to humanity, those words ‘Never Again’ will persist in being one of the most abused phrases in the English language and one of the greatest lies of our time.”

Rusesabagina is a Rwandan humanitarian and a recipient of the Presidential Medal of Freedom. 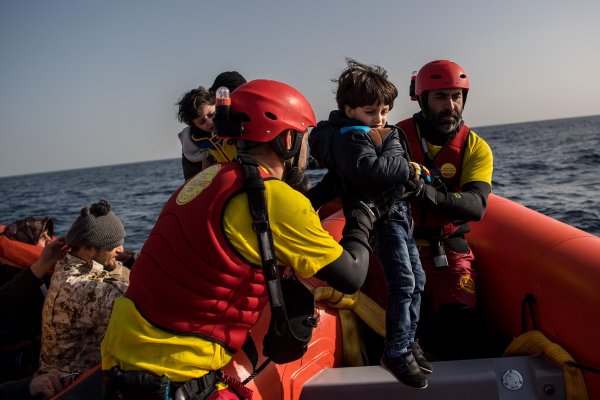 There Are Now More Than 5 Million Syrian Refugees, U.N. Says
Next Up: Editor's Pick