The NCAA Lifted Its North Carolina Boycott. Here's What That Could Mean for LGBT Rights

The NCAA announced on Tuesday that the deal was good enough.

After more than a year of controversy in North Carolina over HB2, a law widely viewed as discriminatory toward LGBT people, Republican lawmakers and the state’s new Democratic governor reached a deal to repeal it last week. And the NCAA, which had joined many businesses in boycotting the state over the measure, “reluctantly” said that North Carolina could again be considered as a host for college championship games. The new law, which removed the requirement that transgender people use bathrooms that match birth certificates but still blocks local protections for LGBT people, “minimally achieved a situation where we believe N.C.A.A. championships may be conducted in a nondiscriminatory environment,” the NCAA said.

Despite outcry from LGBT rights groups over the repeal deal, North Carolina got its basketball back. And that precedent could give conservative lawmakers in other states a model for how to frame bills that affect LGBT rights — and also give other sports leagues a reason to hold similar lines when making decisions about whether to locate their own games in lucrative sports markets.

The squeamish language in the NCAA’s statement was a nod to the criticism surrounding the deal, which includes a moratorium on North Carolina cities passing anti-discrimination protections for LGBT people through 2020. Decisions regarding bathroom access at places like public schools have also been reserved indefinitely for state lawmakers, who have previously opposed policies that take gender identity into account.

The verboten non-discrimination protections are the type that help ensure that transgender people can use pubic facilities that align with their sense of self. Such protections started the whole controversy after the city of Charlotte put measures on their books and state lawmakers subsequently convened to nullify them. But they also protect lesbians from being refused service at a place of business because the owner doesn’t approve of their sexual orientation or gay employees from being fired because the boss objects to same-sex relationships. (Despite widespread belief that such actions are already illegal, no federal law explicitly prohibits discrimination against LGBT people.)

Editorial boards and LGBT rights groups lambasted the compromise, calling it a “political stunt” and saying that civil rights were being used as a “bargaining chip.” Many decreed, as the Charlotte Observer put it, that the deal “will not satisfy any business or organization that is truly intolerant of an anti-gay environment and of a state that codifies discrimination.”

The NCAA, acknowledging that student athletes, coaches, administrators and fans include LGBT people, has stated its “support of all lesbian, gay, bisexual, transgender and questioning individuals” as well as its opposition to “all forms of discrimination against individuals on the basis of sexual orientation or gender identity.” But LGBT rights groups are now concerned that the NCAA is willing to compromise its principles in the face of political pressure, or that the organization has different standards than they do about what equality looks like.

And that does not bode well for those advocates in an era when private institutions — especially sports leagues with diverse fan bases, far-reaching influence and huge economic benefits to bestow — have proved to be the LGBT movement’s most powerful ally, particularly in states with conservative-controlled legislatures.

While the NCAA has said that it will select only host cities that have inclusive environments, LGBT rights advocates say there has been a lack of details on what a city or state must do to prove it is inclusive, or at least what it must not do. “We haven’t had clarity,” says Athlete Ally’s Hudson Taylor, whose organization has worked with the NCAA on LGBT rights issues in the past. He fears that the repeal deal will send the message to other states “that anti-LGBT discrimination is okay,” so long as it does not take the form of a so-called “bathroom bill” that is clearly hostile to transgender rights.

After the ship sailed on the legislative front, some supporters of LGBT rights turned their lobbying efforts toward the NCAA itself. “Compromises have no place in civil rights,” Massachusetts Rep. Joe Kennedy wrote in a public letter that he sent to the organization’s president the day before the NCAA ended the boycott, urging the NCAA to “continue to boycott any host cities or states that discriminate on the basis of sexual orientation or gender identity.” Many of the same icons and businesses — from IBM to director Rob Reiner — that had come out against HB2 also came out against the repeal deal. But the NCAA still sided with the Tarheel State.

More than a dozen states have already considered “bathroom bills” so far in 2017. (Lawmakers in many more states have floated other measures that advocates view as anti-LGBT.) And in states like Texas, no argument has been aimed at conservatives more squarely than the potential economic and political risk of costing the state sporting events. “We already know what happened in North Carolina,” Texas state Sen. Jose Menendez said in a debate over a bill known as SB6, adding that if the state lost the Final Four games scheduled for 2018, it could cost the Lone Star State more than $200 million.

As it stands, SB6 contains a requirement that transgender people use bathrooms that match the sex on their birth certificates. But while North Carolina deleted that language from its books, the replacement law will bar public arenas and schools from putting policies in place that protect bathroom access for transgender people, LGBT rights advocates say. “It’s illegal for [schools] to have a trans-positive policy,” says Mara Keisling, executive director of the National Center for Transgender Equality.

Given that checking everyone’s birth certificates is functionally unenforceable, critics argue that North Carolina’s new law achieves similar ends with less explicit language: keeping transgender women, for example, out of the women’s room and making it more uncomfortable for transgender people to be in the public square. Measures like the new law “single out transgender people like me,” transgender athlete Chris Mosier said on a conference call Tuesday about the measure, “sending the message that we are unworthy of legal protections and worse still, that we should be excluded from public life.”

The NFL expressed doubt about whether Texas could host future Super Bowls if SB6 became law in its current form, for example, saying in a statement that, “If a proposal that is discriminatory or inconsistent with our values were to become law there, that would certainly be a factor considered when thinking about awarding future events.”

But what one organization considers discriminatory is not always the same as another. And while the NCAA acknowledged that some may see North Carolina’s moratorium on non-discrimination measures as “a signal that discriminatory behavior is permitted and acceptable,” that organization concluded otherwise (while the Board of Governors also reserved the right to change their mind).

“We recognize the quality championships hosted by the people of North Carolina in years before HB2,” the organization stated, “And this new law restores the state to that legal landscape: a landscape similar to other jurisdictions presently hosting NCAA championships.” 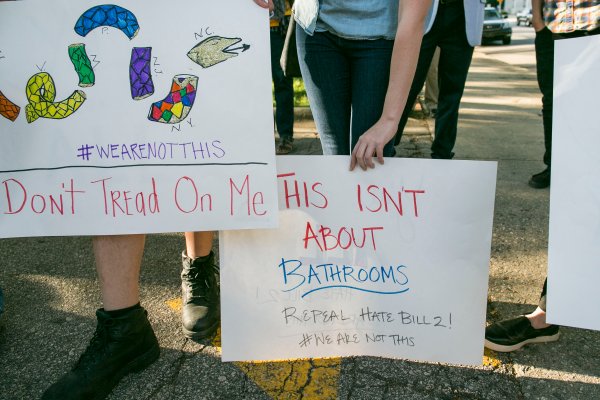 North Carolina Governor Who Signed Bathroom Bill Says People Are 'Reluctant' to Hire Him
Next Up: Editor's Pick