When Hillary Clinton appeared on comedian Zach Galifianakis’s parody talk show “Between Two Ferns” in September 2016, the uncomfortably funny interview turned at one point to clothing choice of the two presidential nominees for their upcoming debates. After discussing Clinton’s iconic pantsuits, Galifianakis pondered what then-nominees Trump would consider wearing.

As it turns out, this particular piece of deadpan banter was not an off-the-cuff remark. In a new oral history of the comedy site Funny or Die, Galifianakis and “Between Two Ferns” director Scott Aukerman reflect on the process of putting together the Clinton interview, which has racked up nearly 15 million views on YouTube. According to Aukerman, the final six-minute cut was mostly improvised; the two shot an hour of footage, of which “maybe five minutes” was scripted, he said.

“But I did try to get her to say the punch line about Donald Trump’s ‘white-power tie,’” Galifianakis explained further. “She said, ‘It would be better if you did it.'” In the end, of course, the politican won out against Galifianakis.

Galifianakis also recounted a part of the interview that was scrapped, involving a faxed-in question. “And there was just the noise of the fax machine while I was trying to make small talk with her. That was probably the happiest I’ve been performing in a long time,” he shared. Relive the full satirical interview, above. 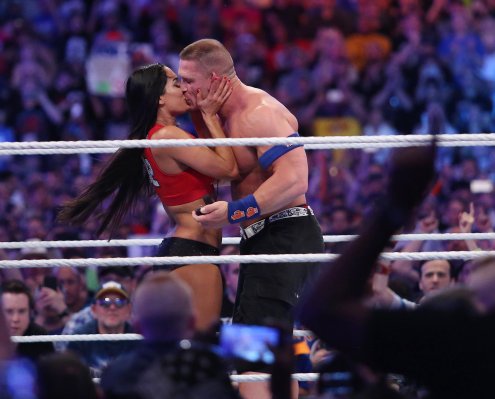 John Cena Proposing to His Girlfriend Is the Realest Thing to Happen in a Wrestling Ring
Next Up: Editor's Pick