Why Equal Pay Day Should Be Equal Ask Day

When I was a small child, my daddy used to tell me, “She who asks, gets.”

Yes, he used the female pronoun — very advanced for a man in the 1940s. But to be fair, Wonder Woman is my age, so a few outlier feminist stirrings were already in the air. Still, the prevailing culture told me something quite different: be small, be quiet, be beautiful to the male gaze, and never, ever, be smarter or stronger than the boys. Not surprisingly, I wanted to be (and became) class favorite, not class president. A ballroom dancing teacher imprinted my teenage brain with the belief that any stumble was my fault, because the natural order is that the boy leads and the girl follows. I also would never ask a man for a date, it was up to him to make the first move. This, of course, placed the source of power outside myself.

Decades of activism since have brought massive change and increasing opportunities to women. I’ve been blessed to spend my entire professional life advancing women to greater equality in society, work and personal relationships.

Today, dual earner couples are the norm and 40% of women, many of them single parents, are either the sole or primary breadwinners. Glass ceilings have shattered in most fields, too.

Yet, some disparities seem maddeningly intractable despite changed laws, opened doors and a study showing that companies with more women in leadership roles make more money. And, almost everyone knows that women have been making around 20% less than men for a ridiculous number of years. African American women earn 63 cents to the white male’s dollar; Hispanic women earn 54 cents. Only Asian American women are close to pay parity. While millennial women fare better than average, one only has to look at the current pay gap in Hollywood and sports to see how deep rooted these disparities are.

The Institute for Women’s Policy Research’s state by state research found that a girl born in the United States in 2017 has a life expectancy of 87 years. In 2082, when she turns age 65, a wage gap will still remain in 13 states.

But that’s only if we continue down our current path, so let’s not.

I’m sick of hearing about the pay gap. Tired of reading the same headlines every year. Done with knowing the average woman loses over half a million dollars in lifetime earnings because of the pay gap.

Sure, changing policy can help and every nation should follow Iceland’s lead, but we also have to change the culture by knowing our value and insisting upon getting paid fairly for it. All that programming that taught us not to ask for certain things, really just taught us to value ourselves less than we value others. The remedy – the one and only thing that ultimately can close the pay gap – is right under our noses, in our mouths and informed by our hearts: the courage to speak up.

Because my daddy was right — she who asks, gets. And while some new data found that women do request to be paid fairly, they remain less likely than men to receive raises due to gender stereotypes and implicit biases. And one thing is sure: she who doesn’t ask is guaranteed not to get.

Unquestionably, experiences of bias can make women back off, lose confidence and lower their self-value. Carnegie Mellon professor Linda Babcock and Sara Laschever chronicled this in their book, Women Don’t Ask, finding that on average women seek for and get less money when they negotiate. Babcock and Laschever observe, “We’re convinced that for behavior to change women must understand, at a very deep level, the forces that shape their beliefs, attitudes, and impulses.”

Because women value their worth less, they start negotiations at a lower spot than men seeking the same job. The jobs site ZipRecruiter discovered in a study last fall that women underestimated their worth on average by $11,000. (By the way, ZipRecruiter and other sites such as PayScale make it easy now to source information about what comparable jobs pay so you can research what you should be paid to support your ask.)

To normalize asking, we have to ask until everyone, male and female, sees women’s asking as expected behavior. Ask until it feels normal to you. Flex those asking muscles and they will grow. Create a new stereotype — one that says, “you bet women ask.” We want that $500,000 back because we deserve it!

If this feels uncomfortable, consider the success of Bumble, a dating app where women are in control. It’s not just another matchmaking tool, it’s a revolution in the making: women must make the first move. Rather than waiting for a man to send the first signal of interest, Bumble requires women to ask first. Such a simple flip makes it a game-changer for both genders. It makes women embrace the power of their own intention. It says that power is inside of us, not a reflection of someone else’s gaze.

So why not take the same approach to closing the pay gap?

Let’s turn Equal Pay Day into Equal Ask Day and keep on asking until we get what we deserve. After all, asking is the best, most effective, way to get what you want.

Gloria Feldt is the co-founder and president of Take The Lead and the author of four books including No Excuses. 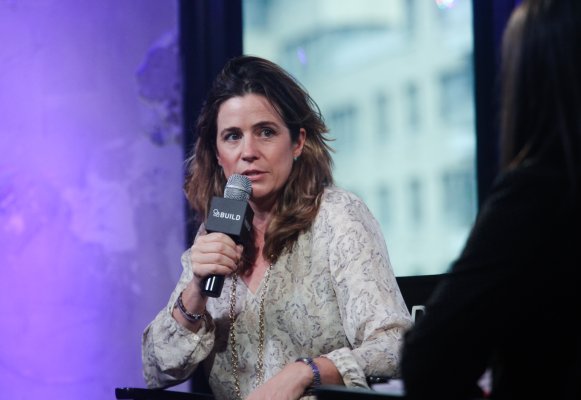 New HBO Documentary Follows Women On Both Sides of the Abortion Debate
Next Up: Editor's Pick