A few years before Sony co-founder Akio Morita passed away, I had a chance to interview him about his decision to buy a movie studio. He told me that to him, “movies and music are just content,” and Sony wanted to own content for its devices.

Morita’s way of thinking had a great deal of influence on Steve Jobs, the late CEO of Apple, who held Morita in high regard. In fact, I believe it served as the base of Jobs’ strategy for Apple, particularly after he rejoined the company in 1997 and went on to oversee projects like the iPod and the iPhone.

The content-first approach is still evident in Apple’s decision making today. You have to understand something about Apple: Ideologically speaking, it’s an operating system and user interface company first, hardware company second — and user interfaces are a form of content.

Don’t get me wrong. Hardware is critical to Apple, accounting for the vast majority of the company’s revenue. But for Apple, hardware is simply a vehicle for delivering its other creations, like user interfaces, apps and services (the lattermost of which is an important source of growth for the company.) Taken together, these components power a rich cross-platform experience that allow Apple users to keep their myriad devices in sync and up-to-date.

When Apple first launched the iPhone in 2007, Phil Schiller, now the company’s senior vice president of marketing, showed me the original device. He turned it off, put it on the table and asked me what I saw. I replied that it was a block of metal with a glass screen. His reply? “It’s a piece of glass for Apple to deliver its exciting new software.”

I remember the conversation well, because it has shaped my understanding of the company ever since. As Apple sees it, the iPhone is a blank canvas on which it can paint. Of course, all hardware is a “blank canvas” to some degree. But none of Apple’s competitors can deliver the level of continuity across devices that it can. The Android world in particular suffers from terrible bifurcation, exacerbated by the myriad hardware and software versions available.

We all know how Apple disrupted the PC market with the Mac, introducing the graphical user interface and mouse to a wide audience for the first time. We also know how it disrupted the music industry with the iPod, and the communications world with the iPhone. The iPad, meanwhile, set off further disruption of the PC world. All of that hardware had one thing in common: Powerful hardware, yes, but more importantly, a user interface, apps and services that people loved, or still love.

It’s also instructive to look at the Apple TV. When it was introduced in 2006, it was labeled a “hobby.” But since then, it has sold tens of millions of units, and Apple has lately shown renewed interest in improving the product. Sales aside, the device also helped Apple make progress on its longtime quest to reinvent television. Before he died, Jobs famously told biographer (and former TIME editor) Walter Issacson that he had “cracked” television. Jobs probably envisioned an actual television set, and rumors of Apple making one never seem to die. But the Apple TV set-top box offers an undeniably simpler interface compared to most TVs. And like Apple’s other hardware, it’s simply a user interface using a TV as a “blank canvas.” (Apple is also funding original programming and is reportedly interested in creating a “skinny bundle” of video content for Apple users.)

Meanwhile, Apple’s new cross-platform TV app is an attempt to create a platform that delivers video on every screen in Apple’s arsenal, all with a simple interface, voice control and cloud features. Instead of making a standalone TV, Apple is simply turning its existing gadgets into part-time TVs. As my friend Benedict Evans of venture capital firm Andreesen Horwitz recently tweeted:

So Apple’s playbook is actually pretty predictable: Hardware devices serve as a blank canvas for Apple to deliver its user interface, apps and services, which are the company’s true crown jewels. If there’s any mystery in the strategy, it’s only in the kinds of blank canvas it decides to make. 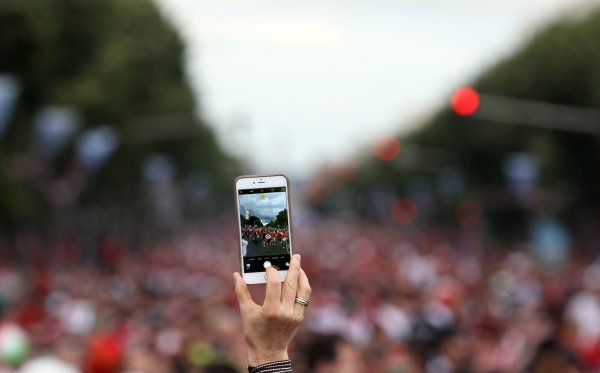 How Your Smartphone's Camera Will Change the World
Next Up: Editor's Pick