Democrats now have the votes they need to filibuster Neil Gorsuch’s nomination to the Supreme Court — prompting a showdown with their Republican colleagues who have vowed to change the Senate’s rules in order to get him a seat on the bench.

The party sewed up the votes during the Senate Judiciary Committee vote on Gorsuch’s nomination Monday, when three Democrats on the committee who hadn’t yet taken a position —California Sen. Dianne Feinstein, Vermont Sen. Patrick Leahy and Delaware Sen. Chris Coons — announced they would oppose Gorsuch’s nomination and vote against cloture, which ends debate.

“I have decided that I will not support Judge Gorsuch’s nomination in the judiciary committee today,” Coons said. “I am not ready to end debate on this issue, so I will be voting against cloture.” Coons was the 41st senator to announce he would oppose cloture, and his remarks marked the moment Democrats secured the votes they needed for a successful filibuster.

“Unfortunately, based on Judge Gorsuch’s record at the Department of Justice, his tenure on the bench, his appearance before the Senate and his written questions for the record, I cannot support this nomination,” Feinstein said. Her office confirmed that she will also oppose cloture.

Senate Republicans have signaled that they’re prepared to trigger the so-called nuclear option, which would change Senate rules and allow them to confirm Gorsuch without garnering the 60 votes needed to overcome a filibuster. Coons said going nuclear would “be tragic.”

Leahy bemoaned the imminent rule change, but said that did not influence his choice to filibuster the nomination. “I cannot vote solely to protect an institution when the rights of hardworking Americans are at risk,” he said. “Because I fear the Senate I would be defending no longer exists. I’ve often said the Senate at its best can be and should be the conscience of the nation. But I must first and foremost vote my conscience, both today and later this week.”

Multiple Democratic senators on the committee cited a few cases in particular that concerned them about Gorsuch’s record when they announced their opposition —the frozen trucker case, about an employee who was fired when he abandoned his job for fear of his health and safety, and the Luke P. case, about an autistic child’s educational standards. The Supreme Court unanimously struck down Gorsuch’s Luke P. decision, in which he ruled education standards for the child must be “merely more than de minimis,” while he was in his confirmation hearing.

Other senators, including Leahy, expressed frustration with Gorsuch’s refusal to answer questions about specific issues and cases during his hearing. Leahy called Gorsuch’s approach to the committee “patronizing” and said, “He was actually excruciatingly evasive.”

This will be the first partisan filibuster of a Supreme Court nominee. (No Republicans have said they will oppose cloture, but three Democrats have said they will support Gorsuch.) Some Republicans see benefits in the Democratic obstruction of Gorsuch, since going nuclear now will pave the way for future Supreme Court fights. But others are resigned to changing the rules out of necessity, with little joy in the vote.

“The Senate traditions are going to change over this man based on the times in which we live,” Republican judiciary member Sen. Lindsey Graham said Monday. “I find it ironic and sad that we are going to change the rules over somebody who has lived such a good life, who has been such a good judge for such a long time. It says more about the Senate that it does Judge Gorsuch.” 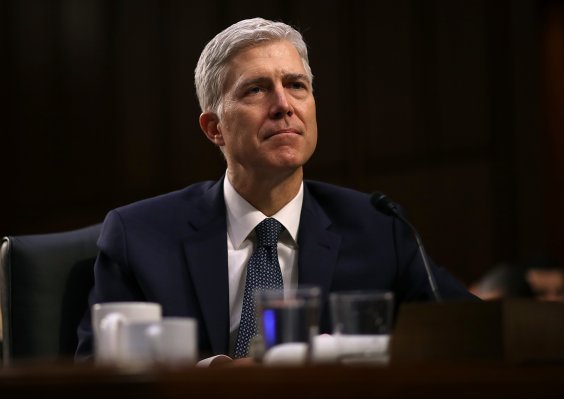