Chechen Police Are Rounding Up and Killing Men for Being Gay, Report Says

More than 100 men suspected of being gay have been detained by Chechen authorities in a campaign against homosexuality, according to a report in a Russian newspaper.

Novaya Gazeta reported on Saturday that three people have been killed in the roundup of men ranging ages 16 to 50; the paper reported that more men may have died in extrajudicial killings.

Two local television reporters and religious figures are among those detained “on account of their sexual orientation — or suspicion of such,” Novaya Gazeta reports. The paper also suggests that others may have been handed back to their families, where they risk being victims of honor killings, “a measure to wash away the shame of the family by killing the perpetrator of this shame.”

The spokesperson of Chechnya’s leader, Ramzan Kadyrov, called the report “lies,” saying there are no gay people in the quasi-independent state, which is formally a part of Russia. “You cannot detain and persecute people who simply do not exist in the republic,” Alvi Karimov told Interfax news agency, according to the New York Times. “If there were such people in Chechnya, the law-enforcement organs wouldn’t need to have anything to do with them because their relatives would send them somewhere from which there is no returning.”

Anti-gay sentiment has been rising in the predominantly Muslim North Caucasus region, where Chechnya is, after an LGBT-rights group applied for permits for gay pride parades. 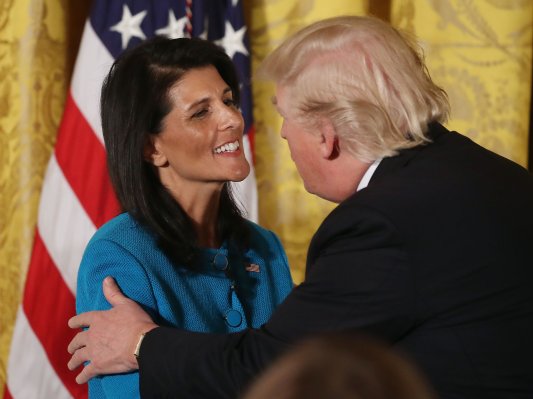 Haley: Russia 'Certainly Involved' in 2016 Election
Next Up: Editor's Pick