How Brexit Has Sparked a Fight Over Who Gets Gibraltar

A tiny British territory off the coast of Spain known primarily for its wild monkeys and for being the place where John Lennon and Yoko Ono got married has become a major focus of the U.K.’s Brexit talks. But what exactly is the situation with Gibraltar, is it threatened by Britain’s impending exit from the European Union, and could the UK go to war with Spain over it? Here is everything you need to know:

Gibraltar is a 2.6 square mile territory at the southernmost point of Spain’s Iberian Peninsula, separated from Morocco by a narrow passage of water called the Strait of Gibraltar, which connects the Atlantic Ocean with the Mediterranean Sea. It has a population of roughly 30,000 people, who are known as Gibraltarians.

Why is it British?

In 1704, Gibraltar was taken by an Anglo-Dutch fleet during the war of the Spanish Succession and ceded to Britain “in perpetuity” under the Treaty of Utrecht in 1713. Spain attempted to retake the territory numerous times during the eighteenth century, mainly by laying sieges on the Rock – the region’s iconic landmark – but was unsuccessful. The war between Britain and Spain ended after the signing of the Treaty of Versailles in 1784, and the two countries united to fight Napoleon in 1810. Although Britain and Spain have been long-term allies for centuries now, ownership of Gibraltar has remained an awkward, often-disputed topic in U.K.-Spanish relations.

How British is it really?

Very British indeed (except for the fact it receives 300 days of sunshine each year). Its official language is English, which is used by the government and in schools. It bears a resemblance to an ordinary British town, with stores like Marks & Spencer, fish’n’chip shops and red British phone and post boxes. Nearly half of its workforce commute across the border and many residents work in the e-commerce and online gaming sectors. The Rock of Gibraltar, which towers over the tiny region, is home to around 230 Barbary macaques, which are thought to be the only wild monkeys in Europe. There is a legend which says British rule over Gibraltar will only end when the macaques no longer populate the Rock.

Why has Gibraltar become a focus of the Brexit talks?

Britain’s Prime Minister Theresa May formally notified the E.U. of Britain’s intention to leave the bloc last week, kick-starting a two-year period of negotiations. The E.U.’s remaining 27 member states then set out a first draft of their Brexit negotiation guidelines, which “define the framework for negotiations under Article 50 of the Treaty of the European Union” and state the overall positions and principles that the E.U. will pursue throughout the negotiation.

Point 22 of the guidelines specifically mentions Gibraltar, stating that “no agreement between the E.U. and the United Kingdom” may apply to Gibraltar without an agreement between Spain and the U.K. This means that Spain will have a veto over how any U.K.-E.U. trade deal or arrangement will affect Gibraltar, after Brexit. May’s letter did not mention Gibraltar.

What has the reaction to this clause been?

A senior U.K. source told The Guardian that the clause was extraordinary because it signalled a lack of total British sovereignty over Gibraltar. Fabian Picardo, the chief minister of Gibraltar, described it as “a disgraceful attempt by Spain to manipulate the European council for its own, narrow political interests.”

On arrival at a meeting of E.U. foreign ministers in Luxembourg, foreign secretary Boris Johnson said the territory’s sovereignty would not change. “[It] cannot conceivably change without the express support and consent of the people of Gibraltar and the United Kingdom, and that is not is going to change,” he said.

Do Gibraltar residents want to remain part of Britain?

Yes. In 1967 and 2002, Gibraltarians were given the opportunity to vote in referendums on whether on not the U.K. should share the territory between Spain and Britain and overwhelmingly opted for British sovereignty both times.

Then, in last summer’s referendum on Britain’s exit from the E.U., 96% of residents voted to remain – making it the area with the most pro-E.U. votes, followed by the London borough of Lambeth with 78.6%. According to The Guardian, in the days following the referendum results, Gibraltar was in total shock and it felt “like someone had died.”

So how will Britain ensure Gibraltar remains part of the U.K?

By going to war. At least that’s what Michael Howard, a former Conservative party leader and former home secretary, suggested in an interview with Sky News. He said the U.K. should be ready to use force to protect its sovereignty over Gibraltar in the same way it defended the Falklands in 1982.

“I think there’s no question whatever that our government will stand by Gibraltar,” he said. “Thirty-five years ago this week, another woman prime minister sent a task-force halfway across the world to defend the freedom of another small group of British people against another Spanish-speaking country. And I’m absolutely certain that our current prime minister will show the same resolve in standing by the people of Gibraltar.”

Michael Fallon, the U.K.’s defence secretary, also said the country would go “all the way” to protect Gibraltar. “We’re going to look after Gibraltar,” he told the BBC.

Howard and Fallon’s jingoistic and impulsive statements have been criticized by politicians and members of the public, who have expressed disbelief that Britain going to war with Spain is a topic of conversation just three days after Article 50 was triggered. Cue many angry and sarcastic tweets:

What has Spain said?

Alfonso Dastis, Spain’s foreign minister, has urged the U.K. to keep its upper lip stiff. He told a conference in Madrid that his government had been “surprised by the tone of comments coming out of Britain” about Gibraltar. “It seems someone is losing their cool,” he added, the BBC reports.

As expected, Downing Street has confirmed that the U.K. will not send the military to defend Gibraltar. However, according to The Guardian, a spokesperson from the British government refused to condemn Michael Howard‘s comments.

As of April 3, Gibraltar’s chief minister are calling on E.U. leaders to remove reference to Gibraltar from the draft Brexit guidelines, but it’s uncertain (and unlikely) that they will comply. What is clear is that if this is the state of Britain’s Brexit negotiations less than one week in, we’re looking at an extremely fraught next two years. 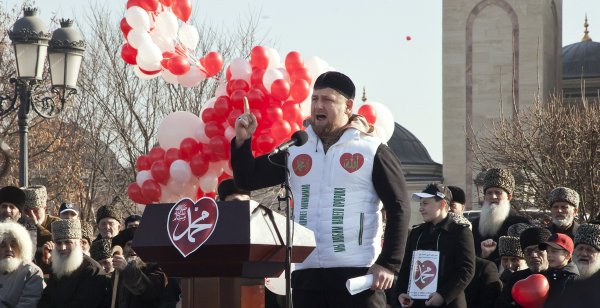 Chechen Police Are Killing Men for Being Gay
Next Up: Editor's Pick