As Democrats near the numbers they need to filibuster Neil Gorsuch’s Supreme Court nomination, a conservative judicial group is running new ads thanking two Democratic senators who broke ranks and said they would support him.

The ads, paid for by the Judicial Crisis Network and provided exclusively to TIME, praise West Virginia Sen. Joe Manchin and North Dakota Sen. Heidi Heitkamp for their decisions to vote against their party’s filibuster attempt and for President Trump’s first Supreme Court nominee. The group spent more than six figures combined on the digital ads, which will begin running Sunday in both senators’ home states.

“Judge Gorsuch is an exceptionally well qualified candidate with bipartisan support and Sens. Heitkamp and Manchin have done the right thing by supporting his nomination,” Carrie Severino, chief counsel and policy director of the Judicial Crisis Network, told TIME in a statement. “The people have spoken and both senators deserve thanks for putting the people first and rejecting the gridlock campaign of the radical left.”

The ads highlight the tricky position Heitkamp and Manchin found themselves in after the election: they are both Democratic senators from states that Trump won. “President Trump won North Dakota because voters wanted judges like Neil Gorsuch on the Supreme Court,” Heitkamp’s ad says.

The Senate will vote on Gorsuch’s nomination this week. Republicans need six more Democrats besides Heitkamp and Manchin to get the 60 votes needed to override a filibuster. If they can’t get the votes, Republicans have signaled they’re willing to trigger the so-called nuclear option that would allow them to bypass the procedural hurdle and confirm Gorsuch with a simple majority vote. 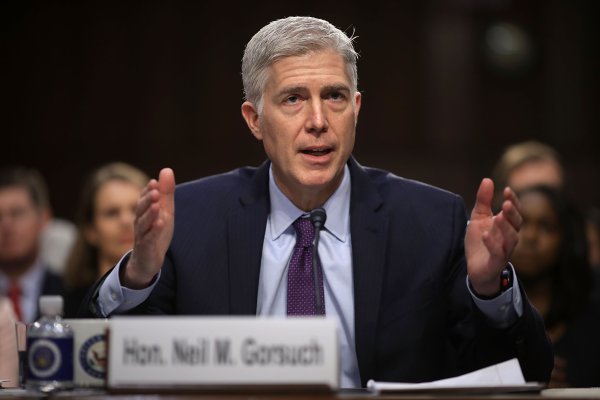 Some Conservatives Happy Gorsuch Might Be Filibustered
Next Up: Editor's Pick