The northernmost boundary of the Bears Ears region, along the Colorado River, in southeastern Utah, on May 23, 2016.
Francisco Kjolseth—AP
Ideas
By Heidi McIntosh

The ink was barely dry on President Barack Obama’s proclamation creating Bears Ears National Monument in southern Utah when it came under attack from Utah’s congressional delegation. And not because the monument isn’t worthy of protection — it certainly is.

The monument stretches across remarkably scenic mesas, towering sandstone cliffs, and canyons that epitomize the beauty of southern Utah. Native Americans have occupied the area for thousands of years and have deep cultural and religious ties to the lands, which house the archaeological and cultural legacy of their ancestors. It’s also a striking wilderness where bears, bighorn sheep and mountain lions thrive and quiet reigns. Two buttes jut thousands of feet above canyon lands to form the region’s namesake, “Bears Ears.”

Yet Utah Senator Orrin Hatch called the Bears Ears National Monument “a travesty,” and he and his Utah colleagues immediately called on President Trump to rescind the monument. Their rash tirade does an injustice to Americans who deeply value and respect their natural heritage. It is a particular insult to the Native Americans who labored to achieve the monument designation after Utah’s congressional delegation failed to craft a bill that offered the protection from looting, mining and oil and gas drilling that this fragile landscape needs. An historic coalition of the Hopi, Navajo, Ute Indian Tribe, Ute Mountain Ute, and Zuni governments worked to make a convincing case for the monument and praised its protection as a “powerful medicine for healing.” Thirty sovereign Tribal Nations and the National Congress of American Indians passed resolutions in support of monument protection for Bears Ears.

President Trump and Secretary of Interior Ryan Zinke should honor the tribes, respect the unique importance of Bears Ears, and reject short-sighted, politically-motivated demands for its reversal.

It fact, it is their only lawful option.

The Antiquities Act of 1906 authorizes presidents to designate national monuments, but it does not give presidents the power to reverse the monuments created by their predecessors. Congress’s intent was clear: the Antiquities Act was to be used to protect the nation’s archaeological, scenic, and scientific wonders. Not to destroy them.

In some ways, the story is déjà vu all over again. Over a hundred years ago, efforts to protect the Grand Canyon as a national park were attacked in 1897 by a local town paper as “a fiendish and diabolical scheme… the fate of Arizona depends exclusively upon the development of her mineral resources.” Today, the Grand Canyon is one of the nation’s most popular national parks, with nearly six million visitors in 2016 and it is an important economic force in the region.

The State of Utah knows this. It spends more than $12 million a year on tourism promotion, focused primarily on its “Mighty Five” national parks campaign, and reports that its investment returns six times that much in income to local businesses. It also produces an estimated $1 billion in state and local tax revenue. But opposition to Bears Ears cost Utah dearly when the outdoor industry’s largest trade show pulled out of Utah – along with $45 million in revenue.

Fortunately, a vast coalition of tribal voices, conservationists, outdoor industry leaders, scientists, and Westerners who love public lands, and monuments like Bears Ears in particular, are rising up and making their voices heard. The President should heed those voices or risk being on the wrong side of history. 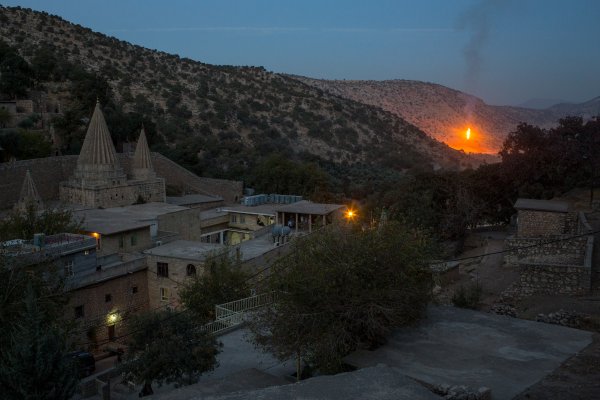 The Connection Between the Global Gag Rule and Extremism
Next Up: Editor's Pick