President Donald Trump isn’t hiding his displeasure with the House Freedom Caucus nearly a week after it helped to defeat his plan to repeal and replace Obamacare, but it remains to be seen whether his anger will be felt beyond Twitter.

As the schism in his party deepened over the failed effort to fulfill the central promise Republicans have made to their voters for the last seven years, Trump took to Twitter Thursday to call out the group of conservative lawmakers — and some of its more prominent members by name.

White House officials spent two weeks courting their votes, including rewriting the bill just 24 hours before it was scheduled to be brought for a vote by eliminating “essential health benefits” requirements for insurance plans. But those inducements proved ineffective in winning over enough Freedom Caucus votes to pass the bill, leading Speaker of the House Paul Ryan to cancel the planned vote Friday afternoon.

And while the White House and Ryan have blamed the caucus for “moving the goalposts” in negotiations on the bill, there appears to be no clear strategy for combating the group’s paralyzing influence on the GOP conference. Trump could seek out and support primary challengers to the freedom caucus members, or travel to their districts to rally their supporters. But there are limits to the pressure the GOP leaders can apply. Ryan needs the group’s votes to maintain his speakership, and the members hail from deeply conservative districts where, by-and-large, they ran well ahead of Trump in November.

White House Press Secretary Sean Spicer declined to say what Trump would do to punish the lawmakers. “I’m going to let the tweet speak for itself,” Spicer said. “For those of you who think — or just for your understanding, it would be improper of me to discuss the election or defeat of any candidate from this podium.”

Trump’s tweets came hours after Ryan warned in a CBS News interview that if conservative members didn’t get on board with Trump’s agenda that the president would consider cutting far more centrist deals with Democrats.

Spicer said the administration was still seeking the support of Freedom Caucus members even as Trump leveled criticism. “I think that there’s a few members of the Freedom Caucus, both prior to last Friday’s vote and since then, who have expressed a willingness to want to work with him rather than necessarily as a bloc,” Spicer said Thursday.

The White House detailed Deputy Chief of Staff Katie Walsh to a pro-Trump 501(c)4, America First Policies, Thursday, because it felt the president lacked “air cover” in the fight for healthcare. Under Walsh, the group is expected leverage Trump’s grassroots supporters to help drive his policy agenda — which will include pressuring wavering Republicans to back the president. 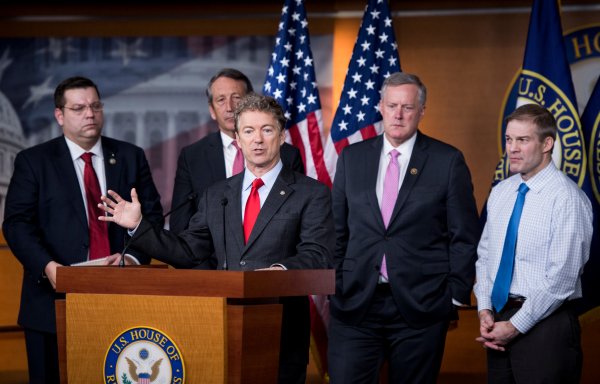 5 Things to Know About the House Freedom Caucus
Next Up: Editor's Pick