Not so long ago, there were five stars of the 21st century Latin American left: Brazil, Argentina, Venezuela, Bolivia, and Ecuador. But with Venezuela imploding and the narrowest of victories for a leftwing candidate in Ecuador’s election this weekend, it looks like this particular chapter of Latin American history is drawing to a close. Here’s what you need to know.

Today’s Brazil represents a spectacular fall from emerging market grace. Under leftist president Luiz Inacio Lula da Silva, Brazilians saw a dramatic improvement in quality of life between 2003 and 2010—20 million Brazilians rose from poverty, and Brazil profited from a combination of prudent macroeconomic policies and a China-fueled commodities supercycle that boosted the resource-rich country’s exports.

But as government popularity continued to soar, the government began to slowly abandon macroeconomic prudence and implement nationalist policies, especially under Lula’s successor Dilma Rousseff. Then came the global demand slow-down. Brazil’s GDP fell from robust growth to a deep recession—7.5 percent in 2010 to -3.8 percent in 2015. Complicating matters further is the still-unfolding Lava Jato investigation, the largest political corruption case in Brazil’s history, which centers on state oil giant Petrobras. Rousseff was impeached, and Lula’s under investigation as well—as are the current heads of both houses of congress and two former opposition leaders. At least Rousseff’s replacement, the center-right Michel Temer, doesn’t have to worry about re-election in 2018—because of his own corruption charges, he’s currently barred from running for political office for the next eight years.

Argentina defaulted on $95 billion in loans in 2001 and two years later voters elected leftist Nestor Kirchner to lead the country out of the economic wilderness. At the time, nearly 50 percent of Argentines lived in poverty. But like Lula in Brazil, Kirchner was fortunate to come to power during the commodities supercycle. Nestor’s wife, Cristina Kirchner, succeeded him in 2007, and in their combined 12 years in power, the Kirchners used booming agricultural exports to expand social welfare programs and government subsidies to struggling Argentines, endearing them to lower income voters. Foreign investors were less enamored, especially once it became clear that the government’s accounting methods were suspect (to put it politely).

Argentines elected pro-business, center-right Mauricio Macri in 2015, and he has already taken steps to boost foreign investor confidence, unifying the exchange rate and resolving standoffs with international creditors to return to world markets. Still, Macri’s policies have yet to deliver meaningful growth and investment. And Cristina Kirchner? She’s preparing to stand trial on charges that, among other things, she tried to defraud the government of more than $3 billion. Despite that, she’s seriously mulling an upcoming senate run; Argentina has probably not heard the last of her.

Now for the countries where the left remains in power. President Nicolas Maduro has little of the charisma or political talents of his mentor, the late Hugo Chavez, who ruled the country between 1999 and 2013. Nor has he enjoyed Chavez’s success; between 2002 and 2011, the Venezuelan poverty rate fell from 48.6 to 29.5 percent. Like Lula and the Kirchners, Chavez delivered on early promises to improve the lives of the country’s poorest and most vulnerable.

Maduro hasn’t. He’s presiding over the world’s largest proven oil reserves at a time when oil sells for roughly $50 per barrel—and Venezuela’s heavier crude is selling this week for less than $42. Oil accounts for 95 percent of Venezuela’s export earnings, and the average Venezuelan is suffering for it. An astonishing 93 percent of Venezuelans today cannot afford to buy enough food—that is, when there’s food to buy. Inflation stands at 800 percent according to unofficial estimates—Venezuela’s central bank stopped publishing inflation data in December 2015.The government then stopped publishing GDP figures in February 2016. The IMF estimates that the Venezuelan economy contracted 10 percent last year, making it the worst performing economy in the world.

Evo Morales has been in office since January 2006. Elected after his two predecessors were ousted in popular protests, the former coca-growers union leader quickly renationalized the country’s oil and gas industries and used the infusion of cash to fund extensive public works projects and social programs that reduced poverty levels by 25 percent. He was reelected in 2009, and again in 2014. Under his leadership, the Bolivian economy has expanded between 3 and 6.5 percent every year for the past decade. Yet, tumbling natural gas prices threaten that progress, and drought conditions have created a massive water shortage.

Morales wants a fourth term as president, but constitutional term limits stand in his way. In February 2016, voters chose to keep those limits in place by a 51-49 margin. He says he wants to run again anyway. Even if he does, there’s no guarantee he’d win—his popularity has been dented by allegations that his former lover Gabriela Zapata helped secure government contracts worth more than $500 million for a Chinese engineering firm that included her on the payroll.

Ecuador had gone through seven presidents in 10 years before Rafael Correa took office in 2007. Correa, a leftist economist by training, put markets on edge by declaring in December 2008 that Ecuador was defaulting on its ”illegitimate” foreign debt. That move vaulted Ecuador past Argentina and Paraguay as the most frequent defaulter in Latin America. But on the back of the oil boom—Ecuador is a member of OPEC—the economy continued to grow steadily, averaging 3.4 percent growth between 2007 and 2014. During that period, Ecuador grew its public sector spending more than any other South American country, cutting poverty by roughly 10 percent. It began repaying its debts in 2015 and reining in government spending, which earned Correa praise from the IMF.

Unlike Morales, Correa has chosen to respect term limits (at least for the time being), and Ecuador returned to the polls this weekend. Lenin Moreno, a former vice president, defeated Guillermo Lasso, a center-right politician and former banker who wants to make Ecuador more business-friendly and boost foreign investment by cutting taxes. But Moreno won by a slim, 51-49% margin and Lasso is contesting the result. Even if Moreno does emerge as Ecuador’s next president, he may want to think carefully about what direction to take. Before the election, some 70% of Ecuadoreans said they wanted “important changes.”

All is not lost for Latin America’s leftists, however. The social programs introduced by these leaders remain popular among the people, even if the politicians that introduced them have not. And thanks to Donald Trump, leftist leader Andres Manuel Lopez Obrador has a puncher’s chance to win Mexico’s presidential elections next year. He would be the country’s first leftist president in more than 30 years. The wheel turns. 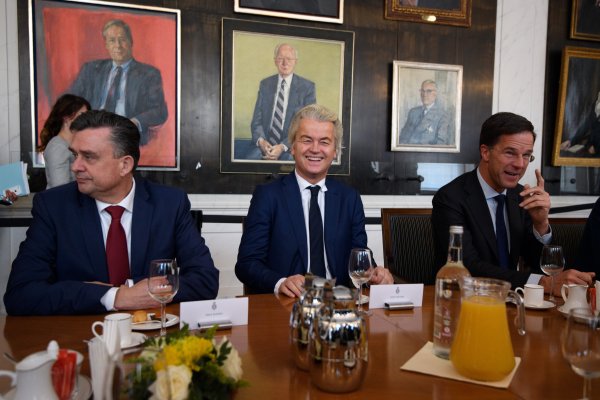 Five Facts About Europe's Big Week
Next Up: Editor's Pick