Walsh, a top aide of White House Chief of Staff Reince Priebus, served as one of the top gatekeepers for President Donald Trump, controlling the White House schedule. Her departure leaves a void in the West Wing, but White House officials believe her serving as a senior advisor to the outside group will fill a larger gap that became apparent during the failed effort to repeal and replace the Affordable Care Act.

Conservative outside groups ran millions in ads opposing the measure, and flooded Capitol Hill phone lines with calls against the Trump-backed measure, but there was no coordinated effort in support of the key plank of Trump’s agenda.

“It was abundantly clear we didn’t have air cover when it came to the calls coming into lawmakers and nobody can fix this problem like Katie Walsh,” Priebus told reporters at the White House.

Walsh’s departure was announced to a small group of reporters in the Priebus’ office, where he was joined by chief strategist Steve Bannon and senior advisor Jared Kushner. All three praised Walsh, and expressed regret that she was leaving. “Katie is, number one, not getting fired,” an official said in response to rumors floated on Twitter. They added she made the decision to leave.

After House Republicans were forced to pull the vote on the health care bill Friday, Walsh was tasked with exploring how she could take on a more political role inside the White House. Over the weekend, officials said, she determined she could best do the job at the 501(c)4 group and informed Priebus, Kushner and Bannon of her recommendation. They accepted it.

“Katie Walsh was instrumental in the victory in November,” Jared Kushner said. “There is no one better suited to fulfill this role than Katie.”

White House officials say they regret not putting a senior official at the outside group as former President Obama did in 2009 with Organizing for Action, which was led by Mitch Stewart and involved strategist David Plouffe. “We didn’t take one of our stars and plant them at the C4,” one official said.

Walsh will serve as a senior advisor to the group. She fills the void at America First Policies left by the departure of Rick Gates, a former top aide to Paul Manafort who was forced from the group last week over his ties to Russia and Ukraine. It also reunites her with Trump’s former digital chief, Brad Parscale, who together with Walsh were credited as the de facto campaign managers during the final stretch of the presidential campaign.

“It has been the honor of a lifetime to work for President Trump in the transition and in the White House,” Walsh said in a statement. “I am excited for this new opportunity and the ability to continue to fight for the President’s agenda to make America great again.”

The move follows just a day after the Mercer family, one of the top pro-Trump donors in 2016, announced a new nonprofit called ‘Making America Great’ with former Trump deputy campaign manager David Bossie as its chief strategist. The Mercers were initially involved in America First Policies but broke ties over frustration with the group’s direction. Trump allies expressed hope that Walsh and Bossie, who worked together on the campaign, would bridge the divide between the two groups.

“The idea is that we have the Bannon and Priebus model here, we have the Bossie and Katie model on the outside,” one White House official said.

Trusted by Priebus, Walsh was the eyes and ears for the chief of staff inside the White House’s often-warring factions. She struggled to institute controls — including who could walk into the Oval Office without a meeting — and streamline the chaotic White House.

“She’s the vital link that pulls things together and makes things happen” at White House, Bannon said of Walsh.

But some staffers, especially those who worked on Trump’s campaign, did not trust her and fed negative stories questioning her loyalties to conservative outlets like Brietbart. Priebus is still looking for a replacement. A senior White House official rejected the notion that Walsh’s departure foreshadowed Priebus’ exit. “Reince is not next,” the official said. “Reince is doing a great job.” Press Secretary Sean Spicer said the White House does not expect additional staffing moves.

Walsh had good relationships with Establishment-minded conservatives, drawing from her time as the Republican National Committee’s chief of staff, the de facto day-to-day executive of the party. She takes with her a deep Rolodex. Before rising to the top job at the RNC, she was a fundraiser extraordinaire. As its finance director in 2014, she raised more than $200 million — a record.

The White House cannot directly coordinate with the nonprofit group. 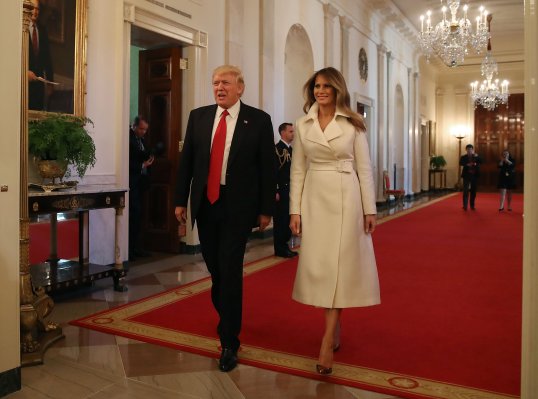