Joss Whedon Is Directing a Batgirl Movie. Here’s What You Need to Know.

Joss Whedon has signed on to write, direct and produce a movie about Batgirl, according to Variety. If you’re looking for a high-profile, ardently feminist man to direct a movie about a female superhero, you can’t do much better than Whedon. His long-running TV series, Buffy the Vampire Slayer, broke ground with its unapologetically badass heroine. And Whedon has plenty of experience with superheroes: He helmed the first two mega-budget Avengers films for Marvel.

Here’s everything you need to know about the upcoming movie, the director and a potential controversy.

The first incarnation, Bat-Girl, was introduced in 1961 as Betty Kane. Barbara Gordon replaced her as the non-hyphenated Batgirl in 1967 and has remained the most iconic version of the superhero since. The daughter of Commissioner Gordon, Barbara patrols the streets of Gotham at night fighting crime as Batman’s sidekick. Like Batman, Batgirl has no superpowers but does know martial arts and has a genius-level intellect. She is a completely different character than Batwoman, a.k.a. Katherine Kane, a rich heiress who also fights crime.

Gordon has gone through many iterations, and the latest version is by far the most modern and light-hearted. She’s attending grad school, wearing Doc Martens and leather (not spandex!) and living in the Brooklyn-like hip area of Gotham City. She’s sort of Veronica Mars-meets-the Dark Knight.

However, Entertainment Weekly reported that the movie will be heavily influenced by an earlier run of the New 52 Batgirl comics, written by Gail Simone and launched in 2011. In that series, Barbara Gordon has recovered from a spinal injury inflicted by the Joker in a notorious storyline (more on that later) thanks to experimental surgery. She still fights crime but is haunted by the attack.

Batgirl’s been around for decades but never starred in her own movie, though Clueless star Alicia Silverstone did play her in 1997’s Batman & Robin.

MORE Meet All the Actors Who Have Played Batman and Robin

Batgirl’s been the center of some controversial moments

Batgirl is a central character in the famous 1988 graphic novel The Killing Joke written by Alan Moore. In it, the Joker tortures and paralyzes Barbara Gordon, effectively ending her career as Batgirl. He then shows nude pictures of Barbara to her father, Commissioner Gordon. Critics argue that the tale strips Batgirl of her power in a sexually-explicit way that a male character would never have to endure. Moore has even expressed regret about the Barbara storyline.

However, controversy surrounding The Killing Joke has continued to bubble up over the years. In 2015, DC released a variant cover of Batgirl #41 that paid homage to sexual violence of The Killing Joke, though the publisher eventually withdrew the controversial image. And this summer Warner Bros. released an R-rated animated version of The Killing Joke that stoked controversy among critics and fans again by adding a sexual relationship between Batman and Barbara into the story (in addition to Barbara’s maiming) even though the two have historically had a father-daughter dynamic.

It’s unclear how much of this backstory will play a part in the new film. There’s also no word yet on whether Ben Affleck’s Batman or Jared Leto’s The Joker will even appear in Whedon’s movie. However, tapping into this storyline in any way would be a risky move.

The current version of Barbara Gordon has red hair. Even before Whedon signed on, the Internet was really pulling for recent Academy Award-winner Emma Stone to play the character.

Whedon had his hands in many of Marvel’s early projects but parted ways with the studio after Age of Ultron in part, he says, because it was taking up so much of his time. The Batgirl movie is being described as a “standalone” film, so it’s not all that surprising that he’s switching to teams to work on this one project. And fun fact: Whedon was one of the many directors who tried to get a Wonder Woman movie off the ground with DC years ago.

DC and Warner Bros. are likely hoping that Whedon will bring some much-needed levity to their superhero franchise since their last two films, Batman v Superman: Dawn of Justice and Suicide Squad were panned by critics for their over-the-top darkness.

But not everyone’s on board

Studios have been hesitant to spend money on female superhero films, pointing to critical and commercial flops from the early 2000s like Catwoman and Electra. But recent female-led blockbusters like The Hunger Games and The Force Awakens have proven audiences will pay to watch women kick butt too. Things are slowly starting to change: DC’s first female superhero movie, Wonder Woman, premieres June 2. The studio has also greenlit Gotham City Sirens, a movie about the female baddies of the Batman universe with Margot Robbie’s Harley Quinn at its center. Marvel, meanwhile, will premiere its first female-led superhero movie, Captain Marvel starring Brie Larson, in 2018.

So a Batgirl movie is good news. But there’s also the issue of who is making these movies. Studies show that male directors are trusted with bigger budgets and more high-profile films than female directors. (There’s even a federal investigation into sexism against female directors underway.) In fact, Patty Jenkins is the first woman to direct a big-budget superhero in Wonder Woman. Fans are already wondering whether a woman should have been given the chance to bring Barbara Gordon to the screen:

Whedon has been a prominent critic of sexism in Hollywood. He tweeted, for example, about the “70s era sexism” of the Jurassic World trailer. But some Avengers fans criticized his portrayal of Scarlett Johansson’s Black Widow in Avengers: Age of Ultron. (Though, no, he did not quit Twitter over those criticisms.) 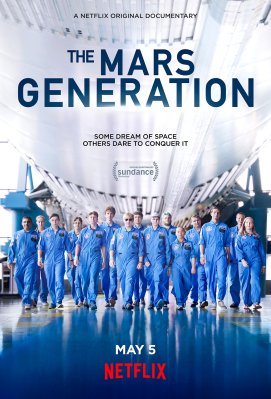 The Mars Generation Trailer Highlights a New Group of Spacefarers
Next Up: Editor's Pick