'I Want to Win a Positive Vote.' Emmanuel Macron Tries to Seal the Deal in France

The man tipped to be the next President of France has few possessions in his office in Paris’s 15th district: Under the bare walls, a handful of photos and mementos, and a watercolor sketch of his wife sit propped on a bookshelf, while other books lie stacked on the carpet. The modest suite, in a drab building in an unfashionable part of town, is temporary digs for Emmanuel Macron, the country’s former Economy Minister, who, at 39, has become a game-changing phenomenon in the country’s presidential race.

By May, Macron’s office could be a lot more ornate: The upper floor of the sumptuous Elysée Palace, with its priceless chandeliers and tapestries. If so, the former Rothschild banker would be the most surprising French president in generations. He has never held elective office, and would be the youngest leader in modern French history. Yet polls show him neck-and-neck with far-right National Front leader Marine Le Pen in the first-round vote on April 23, far ahead of three other major candidates, and then trouncing her in the decisive round on May 7, as the country is expected to unite against Le Pen.

There are still deep questions over what a President Macron might be, not least how he will govern with no conventional political party to call his own. But in an interview with TIME on Wednesday, Macron insisted he was not simply there to shut out the National Front candidate. “I want to win a positive vote,” he says. His policies would bring back growth and jobs to France, he says, after years of stagnation in the world’s sixth-biggest economy. These include drastically loosening France’s rigid labor laws, and luring back hundreds of thousands of French expats, many of them well-off professionals, by scaling back special wealth taxes and encouraging entrepreneurship. “My point is to convince the French people that a positive project and a progressive view is more adapted to our challenges,” he said.

Macron is indeed far different from most French politicians; unlike President François Hollande, whose cabinet Macron quit last September, he speaks fluent English and is widely traveled. He also cuts a sharp contrast to the populist wave that has swept the continent—and the U.S. Far different to politicians like Le Pen, Macron wants a strong E.U. that imposes strict commitments on the 27 members left standing after Brexit. The E.U. is one of the most fraught issues in the election campaign. Le Pen has vowed to scrap the country’s use of the Euro if she is elected, and to hold a Brexit-style referendum to pull France out of the E.U.

By contrast, Macron believes Brexit is a grave mistake for the British and other Europeans. That strong pro-E.U. stance has made him a ready target for Le Pen, who has hailed Brexit as an act of freedom. She has depicted Macron as subsuming French needs to E.U. bureaucrats in Brussels. Macron spoke to TIME just as Theresa May triggered the process to begin Britain’s exit from the E.U., probably by 2019.

“Europe is part of the solution for us,” he says. “If you look at the situation on climate, energy, industry, agriculture, immigration, terrorist attacks, we have a lot of challenges. But the best answer is at the European level, because you are much more credible, much stronger.” He says that strength is essential also “vis-à-vis the U.S. and China.”

With Britain headed out of the E.U., and President Trump now in office, Macron, like many other European politicians, are reordering their alliances. The French elections has shattered the long-held establishment, in which Socialists have traded power regularly with conservatives.

Macron quit President François Hollande’s Socialist cabinet last September to form his own political movement, called En Marche! (On the Move!), after months of trying to push economic reforms. He says he intends to “make France more attractive and competitive, through reforms, by making France the pro-innovation, pro-researchers, pro-future, country.”

Although French presidents have huge power to draft laws, some items will require Parliament’s cooperation. So far, it is unclear which party will win French parliamentary elections in June. Much like Congress with Trump’s agenda, lawmakers could choose to push Macron’s agenda, or hamper it, should he become president.

There’s a growing sense the race is his to lose. Key figures from Hollande’s inner circle, most recently his former Prime Minister Manuel Valls, have said they intend to vote for Macron, rather than for the candidate of their own Socialist Party. However Macron has warned people not to think of his victory as inevitable, fearing that many conservatives and Socialists might choose to stay home in the second-round election rather than vote for him. Battling complacency is one major task in the campaign’s closing weeks. “The dynamic is good, and it is continuing,” he told reporters last weekend. “But for me, nothing is over.”

Nonetheless, he’s already attempting to build alliances. Shortly before speaking to TIME, Macron met in his office with London’s Mayor Sadiq Khan—the only presidential candidate the mayor met with during his two-day visit to Paris — ostensibly to convey his condolences for those killed in last week’s terror attack outside Parliament.

But Macron also suggested, in remarks to a group of British journalists, that Europeans needed to band together on some issues against President Donald Trump, whose policies now appear at odds with the prevailing views on the continent. Noting Trump’s decision to reverse the Obama administration’s energy regulations, Macron told reporters that London and Paris would together mount “a strong battle against pollution, especially in the context of what you saw yesterday: The American President, who decided rather to go backwards.”

Trump on Tuesday signed an executive order allowing new coal-power plants in the U.S., and effectively cancelling U.S. commitments to global climate change efforts. President Obama made those commitments as part of the global climate negotiations in 2015—the signature accomplishment of Hollande’s five-year rule, and now looking fragile with Trump in the White House.

Asked whether Europe and U.S. were increasingly diverging on key issues like immigration, terrorism, and the environment, Macron replied: “I do hope this will not be the case. We need a Transatlantic relationship vis-à-vis terrorist attacks, climate change and all the global challenges,” he says. “But I do note that Mr. Trump has been taking a series of negative decisions.”

Despite that, Macron says he believes the U.S. will remain in sync with Europe on policies like climate change. “I’m very optimistic for two reasons,” he says. “First is the U.S. system: checks and balances, which will force him to respect former commitments. We saw that on migration issues. The second point is that you will see the strength of the long-term, historical relationship [with France].”

As President of France, he says, he would “enshrine the U.S. in this common perspective. We have so many links and such a common history, that our destiny, in my view, is all together.” First, however, he will need to fight his own campaign battle, and write the next chapter of French history. 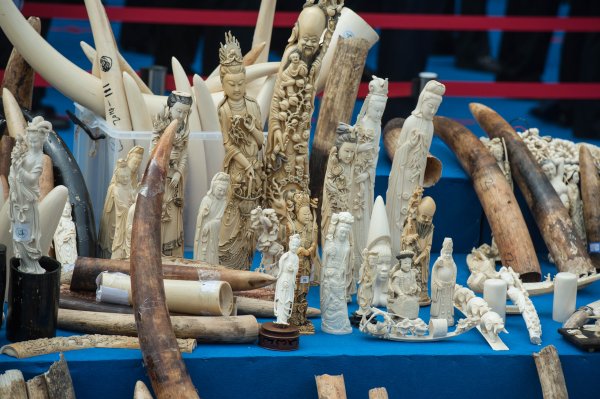 The Price of Ivory in China Plunged 65 Percent in the Last Three Years
Next Up: Editor's Pick