The Digital Divide: A Quarter of the Nation Is Without Broadband

Appalachia is not what it used to be. Hunger no longer stalks the hollows and ridges of a region once emblematic of American poverty, and no one lacks electricity. “Except for that one guy who comes in for car batteries,” says Tim Groves, from behind the counter at Advance Auto Parts in Woodsfield, Ohio. “That’s because he doesn’t want electricity,” explains Jason Covert, the store manager. “He wants to be off the grid.”

So, progress. Yet when it comes to the Internet, the region remains as backward and stunted as its stereotype. Decades into the information age, folks in these parts continue to make do with dial-up.

Across much of America, a generation has come of age without even once hearing the stutter, squeal and shhhhhh of a home computer’s modem shaking hands with an Internet server. In Woodsfield–and hundreds of thousands of other overlooked pockets of the nation–there are people who have never heard anything else. “Hell, it’s barely fast enough to check your email,” says Covert. “You hit the button and you wait five minutes. Then you hit it again and get a snack …”

America’s digital divide is not only a matter of geography. Among the quarter of Americans without broadband–basically, a connection fast enough to stream video–are many who simply cannot afford the monthly bill for service. Less than half of households living on under $20,000 are connected. The collective deficit in opportunity, education and prospects–everything implied in “being connected”–further separates us into haves and have-nots.

On that much, both parties agree. The chairman of the Federal Communications Commission (FCC) under President Obama called a 25-megabits-per-second download speed–the minimum technical parameter of broadband–the “table stakes” for participation in 21st century life. And on his very first day in office, Ajit Pai, the FCC chairman appointed by President Trump, vowed to close the divide “between those who can use cutting-edge communications services and those who do not.” Trump’s Commerce Secretary agrees, and 48 Senators have signed a letter urging a broadband expansion that, if it were up to Democrats, would account for $20 billion of their proposed $1 trillion infrastructure bill.

Yet no master plan exists to bring broadband to every home, at least not the way the Tennessee Valley Authority in the 1940s brought electrical power to Appalachia. In fact, many believe that the public-utility model does not quite work for high-tech.

“Universal telephone service has been around for a hundred years, maybe more. It’s a well-established social principle that everybody ought to have the ability to communicate,” says Mark Cooper, research director for the Consumer Federation of America, a pro-consumer advocacy group. “But electricity or water, those are services that are static, they’re not dynamic. You buy electricity, it’s the same kilowatt everywhere.

Not so with Internet access. “The communications system, however, has proven to be extremely dynamic,” says Cooper. “You want to make sure everyone gets it, but you also don’t want to strangle innovation.” What if, for example, Washington had mandated that every home get DSL–the level of service that came after dial-up but was soon overtaken by broadband? Companies will not constantly rebuild networks.

So instead of mandating Internet for all, the FCC has fallen back on the slack offered by its founding legislation, which calls for communications to all people “so far as possible.” The result is a patchwork of programs that has left vast portions of the country unserved.

One is the Lifeline program, which subsidizes service to low-income households but is viewed skeptically by Pai. It is funded by the “universal service” fee that shows up on the monthly bill for telephone landlines, a pool evaporating fast. The same fee funds the E-Rate program, which provides broadband to libraries and schools, like Conotton Valley High School, over 60 miles south of Youngstown, Ohio.

There, every student gets a Chromebook laptop, low-cost computers having essentially replaced textbooks in many schools. But learning stops at the classroom door for students who can’t get online at home. “And the kids who live in a rural area are often ones who are socioeconomically challenged,” says school counselor Kelli Edwards.

For many, phones become a substitute. Pew surveys from 2016 found more people have smartphones (77%) than have broadband (73%). But depending on a phone has drawbacks. Policymakers trade stories of kids’ completing assignments by cadging wi-fi outside closed libraries or camping out in McDonald’s. “A lot of kids will try to do things on the phone, but they run out of data,” says Edwards.

In Conotton Valley–pronounced like Forgotten Valley, as it gets called–some households access the Internet by satellite dish, which is slower and more expensive than terrestrial service. “And by the middle of the month, it goes to nothing” as data limits are reached, says resident Jean Siedel. Social-studies teacher Danielle Caldwell exults after trading up for DSL. Satellite “was truly horrifying,” she says. “One person can use it fully at a time. If a kid is looking at a video, I can’t even see a photo on Facebook.”

Rob Blick, who teaches math at Conotton Valley, is the most tech-savvy teacher in the building but had no idea that the cartoon frog a student has posted on his classroom bulletin board was Pepe, an Internet meme appropriated by white nationalists. “Good to know,” Blick says with a nod. “I better take that down.” The trouble is he has a master’s in computer programing but no Internet at home. His mother’s house has DSL, and people arrive an hour early for Sunday dinner so they can get their online banking done before the meal. The local provider said it isn’t worth it to wire his neck of the woods.

Politically, the persistence of the digital gap defies logic. Rural areas, after all, punch way above their weight in Washington. But government responds to more than constituents. The consolidation of communications giants has decreased competition and grown the industry’s clout in Washington. Consumer advocates note that FCC chairman Pai, formerly a lawyer for Verizon, has voted against expansions of E-Rate and Lifeline and places his faith in a marketplace that has not provided anywhere near universal access to what is now an essential service.

“I respectfully disagree. The public is our client,” Pai told TIME in an interview conducted by phone as he was being driven across Ohio. After he had delivered a speech in Youngstown celebrating small-market entrepreneurship, his next stop was Cleveland, where the poky speeds of inner-city servers had produced headlines about “digital redlining.” Pai’s proposed fix for neglected urban areas is “Gigabit Opportunity Zones” meant to coax service providers into low-income areas. Critics say access is less an issue there than affordability.

“From my perspective, I don’t really care what technology or business model or sector of the community is trying to deliver full-spectrum communications services to consumers,” Pai insists. He notes that the FCC’s first action under him was a $170 million outlay to encourage broadband in upstate New York. And he calls Trump’s promised $1 trillion infrastructure program an opportunity to rescue the Universal Service Fund from the sinking landline. Other small-bore remedies are common sense, like requiring companies to share poles–which would solve Blick’s problem–or a “dig once” policy of laying cable during road building.

Competition would also help–yet exists in only a quarter of areas wired for broadband. Some frustrated municipalities have responded by building their own servers, or “self-provisioning.” But in some 20 states, cable companies have persuaded legislatures to outlaw the practice.

What’s the fix? “We’re kind of for all of the above,” says Phillip Berenbroick of the consumer advocacy group Public Knowledge. But all of the above requires a unity of purpose not yet seen from a President who ran as a populist and arrived in Washington surrounded by captains of industry. 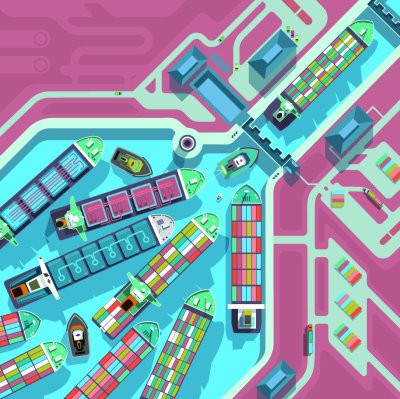 How to Unclog America’s Gridlocked Waterways
Next Up: Editor's Pick